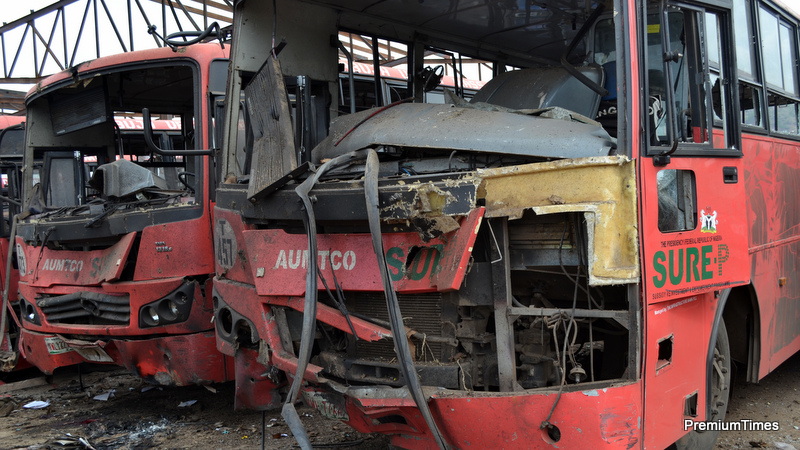 The Federal Government on Friday filed a seven-count terrorism charges at the Federal High Court, Abuja, against seven people arrested in connection with the April 14, 2014 Nyanya bus station bomb blast.

The accused were arrested by security agents following investigations into the bombing which killed at least 75 persons and wounded many others.

Count one read that the accused persons “conspired to commit an act of terrorism by driving a Volkswagen Golf car laden with improvised explosive devices and parking same at the motor park which was later detonated and killed about 75 innocent persons and wounded several others.”

According to the prosecution, the offence is contrary to Section 17 of the Terrorism (Prevention) (Amendment) Act 2013, punishable under the same section.

Counts 2, 3, 4 and 5, respectively, relate to their “committing terrorism act, professing to be members of Boko Haram, access to information about the group and failing to inform security agents about them.”

The four counts contravene Section 1 (2) (a), Section 16, Section 8 (a), (b) of the Terrorism (Prevention) (Amendment) Act 2013, punishable under the same sections, accordingly.

Count 6 specifically accuses Ogwuche of “knowingly and directly supporting and giving various sums of money at different times and places in Abuja to widows of Boko Haram members.”

Count 7 accuses Ogwuche also of “carrying out surveillance and identifying Silver Bird Galleria and other locations in Abuja as potential targets of terrorist attacks.”

The two counts contravene the provisions of Section 5(b) and Section 1 (2) (b) of the Terrorism (Prevention) (Amendment) Act 2013, punishable under the same sections, accordingly.

Earlier at Friday’s mentioning of the case, Mohammed Diri, the Director of Public Prosecution, Office of the Attorney-General of the Federation, said the prosecution was ready to proceed with the case.

Mr. Diri also made an oral application to strike out the name of the 8th accused person, now at large, from the charge sheet and correct the spelling of the second accused person’s name.

The trial judge, Ahmed Mohammed, in a brief ruling, granted the application and directed five of the accused who were not represented by counsel to get lawyers before their formal arraignment.

Ahmed Raji and Abdulhameed Mohammed were the only lawyers who represented the first and fifth accused respectively, while the other five accused persons had no legal representation.

The judge adjourned the case till February 20 to enable the accused persons without counsel to get counsel of their choice and come back for their arraignment.