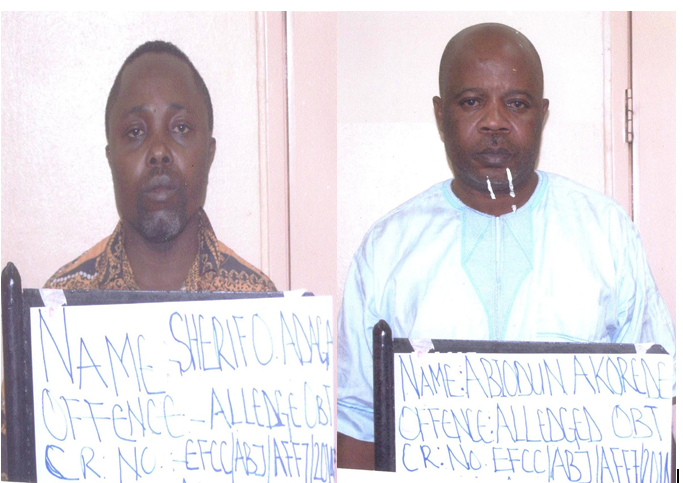 The Economic and Financial Crimes Commission [EFCC], on Tuesday arraigned the duo of Abiodun Akorede (aka Kwesi John Mensah) and Sherif Olaseni Ajaga (aka Rowland Komolafe) before Justice H.U. Baba of the Federal Capital Territory High Court, Abuja, for criminal conspiracy and attempt to obtain money under false pretences.

A statement by the spokesperson of the Economic and Financial Crimes Commision, Wilson Uwujaren, said the accused persons, who pleaded not guilty to the two-count charge were arrested by operatives following a petition by Tunde Ogbeha, a former senator, alleging attempt to swindle him in a non- existent transaction.

The retired army general allegedly received a telephone call on December 5, 2014 from one Morris Williams, who claimed to be a staff of World Wide Organisation.

Williams was said to have told the petitioner that his company was ready to award him (the complainant) the sum of £10,000,000 (Ten Million Pound) for his consignment that was mishandled by an unnamed courier company.

Williams was also said to have told the complainant that one Kwesi John Mensah and a certain Rowland Komolafe would meet him in Nigeria to deliver the money.

There was however a caveat. He would pay the clearing /service fee of about £11,000 (Eleven Thousand Pound).

Aware that he was not expecting any consignment, the petitioner told the accused persons that his driver would pick them on arrival in Nigeria to his office in Abuja for further discussion.

It was during the meeting in his office that the accused persons were handed over to the EFCC.

One of the charges read: “That you Abiodun Akorede, aka Kwesi John Mensah, Sherif Olaseni Ajaga, aka Rowland Komolafe and others still at large on or about December 5, 2014 in Abuja within the jurisdiction of this Honourable Court, with intent to defraud one General Tunde Ogbeha did attempt to obtain the sum of £11,000 (Eleven Thousand Pound) only under the pretence that the said sum was meant for clearing charges for a non-existing transaction, which pretence you knew to be false and thereby committed an offence contrary to section 8(b) of the Advanced Fee Fraud and Other, Fraud Related Offences Act, 2006 and punishable under section 1(3) of the same Act.”

Justice Baba ordered that the suspects be remanded in Kuje Prison and adjourned the case to January 20, 2015.