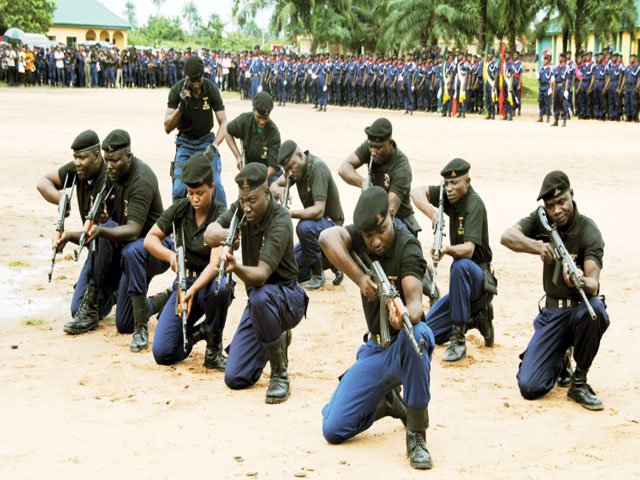 The existence of illegal security outfits in Nigeria is a threat to national security, Ime White, the Public Relations Officer of the Nigeria Security and Civil Defence Corps, Akwa Ibom Command, has said.

Mr. White told the News Agency of Nigeria on Sunday in Uyo that the insurgency in the northern part of the country necessitated his concern over the operations of unregistered private security companies.

He said that there was the possibility of some people hiding under such illegal private security outfits to organise terror attacks on unsuspecting citizens.

“With the current insurgency in the country, nobody knows who will hide under the cover of a private security guard company to unleash terror on others,” he said.

“Before you know it, such organisations will gather information and plan attacks on defenceless citizens.

“This makes it crucial that every private security guard organisation operating in this country is duly registered.”

The official said that the Akwa Ibom command of the corps had directed unregistered private security guard companies in the state to register.

He added that in spite of the efforts of the command in this regard, operators of such companies had remained adamant. He warned that the command would soon sanction defaulting private guard companies and advised their officials to regularise their operations to avoid sanction.

He said the NSCDC needed to know the personnel working in all security guard companies in the state, with a view to ascertaining their nationalities and character.

He said the command was fully prepared to ensure that the people of Akwa Ibom as well as visitors enjoy peaceful celebrations of Christmas and New Year.

“The command will deploy some undercover security officers to markets, shopping centres, places of worship and recreation venues from December 22 to January 5, 2015.

“We will collaborate with other security agencies in the state to check criminality,” he said.

The spokesperson advised the people not to store petrol at home and avoid panic buying since the Federal Government had promised to ensure adequate supply during the yuletide.

He warned dealers not to hoard the products and reminded them that it was an offence to do so.

Mr. White cautioned dealers not to adjust their pumps, adulterate their product or short-change buyers.

He said that officials of the Nigerian National Petroleum Company, NNPC, in the state in conjunction with the NSCDC would check such irregularities during the period.