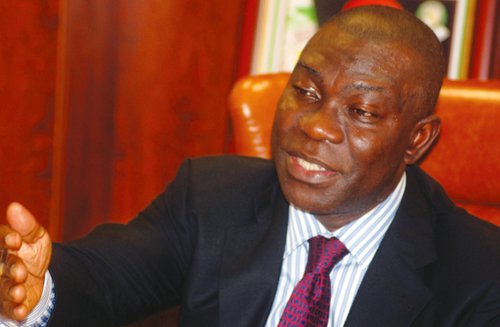 The Deputy President of the Senate, Ike Ekweremadu, was Sunday elected as the Peoples Democratic Party, PDP, senatorial candidate for Enugu West Senatorial zone in the 2015 election.

Mr. Ekweremadu was returned unopposed with 294 valid votes cast by delegates from all the five Local Government Areas in the senatorial zone.

He said he would support Ifeanyi Ugwuanyi, a member of the House of Representatives, to emerge as the PDP flab bearer in Monday’s gubernatorial primaries.

In his acceptance speech, Mr. Ekweremadu announced that leaders of the party had resolved to back Mr. Ugwuanyi from Enugu North senatorial zone as the governorship candidate of the party in the state in line with their desire to ensure peace and justice for all the people of the state.

He thanked the Almighty God for giving him another opportunity to aspire to represent his people at the senate and dedicated his victory to God and Governor Sullivan Chime whom he described as his friend and brother.

Mr. Ekweremadu applauded one of the governorship aspirants from his senatorial zone, Anayo Onwuegbu, for accepting to drop his ambition to ensure peace in the state saying his sacrifice was highly appreciated.

“I have run several elections in the past, but this is the first time I am being returned unopposed in spite of all the challenges. Therefore there is God in heaven. We have God who acts when everything seems impossible and he has shown that He is a true God and He will answer you when you call Him,” he said.

“I will like to dedicate this victory we have achieved today to God and my friend and my brother, the Governor of Enugu State. The governor is our friend and our brother. He has done well as a governor.

“It pained me when Satan and temptation came between us. We thank God we were able to resolve our differences. We started so well and by the grace of God we are going to end very well.

“So tomorrow we will go to Enugu and elect Ifeanyi Ugwuanyi as our governorship candidate. Before this time tomorrow, by God’s grace, Ifeanyi Ugwuanyi would be the flag bearer of PDP in Enugu State.”

​Gbenga ​Daniel ​steps down for Kashamu in Ogun Senatorial race