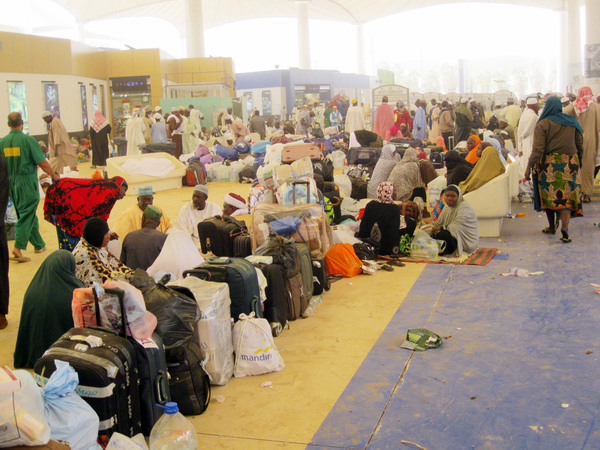 The National Hajj Commission of Nigeria, NAHCON, on Monday denied that some Nigerian pilgrims in Saudi Arabia, particularly the ones from Adamawa state were stranded amid calls for a review of return flight schedule of Nigerian pilgrims.

Some pilgrims from Adamawa state, in panic mode, expressed worry as they were unaware of the schedule of their departure from Mecca, Saudi Arabia.

But the spokesperson of the commission, Uba Mana, denied that Adamawa Pilgrims were abandoned. He said “the first batch of Nigerian pilgrims to this year’s hajj has since arrived Nigeria.  As I am talking to you now, Adamawa pilgrims have only spent two weeks”.

He said the principle of first to come first to go would be applied for all the pilgrims irrespective of status.

“You will go as you come, to where you were picked from, irrespective of status. We will be fair to all our pilgrims,” he said.

Mr. Mana said the pilgrims from Lagos and Jigawa States have returned to Nigeria following the completion of Hajj rites on Friday and emphasized that no pilgrim will be left stranded in the holy land.

He said proper arrangements had been made with the concerned airlines, while there is also a stand-by arrangement in case of failure by the contracted airlines.

Mr. Maina said that the Directorate of Pilgrims Affairs, DPA, of the Technical Committee on Hajj did its best in obtaining visas, passports and accommodation for the pilgrims.

Also reacting on the delay being experienced by the Nigerian pilgrims after completion of Hajj rites, a renowned Islamic Scholar, Nasir AbdulMuhyi Jos, said pilgrims are subjected to unnecessary difficulties.

He, therefore, called on NAHCO to review its return flight schedule to ease the difficulties. “Even his eminence, the Sultan had once suggested that the usual 40 days stay being observed by Nigerian pilgrims should be reviewed,” Mr. AbdulMuhyi said.

“The failure to commence return airlift three days after Hajj, is most unfortunate; that is why all the stakeholders have to come together to form a common front to address the problem once and for all,” he suggested,” Mr. AbdulMuhyi said.

He suggested that the way to solve the problem of Nigerian pilgrims was to engage established airlines, like the Saudi Airline, so that the Nigerian government would not need to intervene.

Mr. AbdulMuhyi commended Nigerian pilgrims for behaving appropriately at this year’s Hajj, and called for clear-cut policies that will sanitise Hajj operations in Nigeria.

The scholar appealed to the government to properly look into the Hajj exercise with a view to addressing some of precarious situations that hamper smooth Hajj operations in the country.