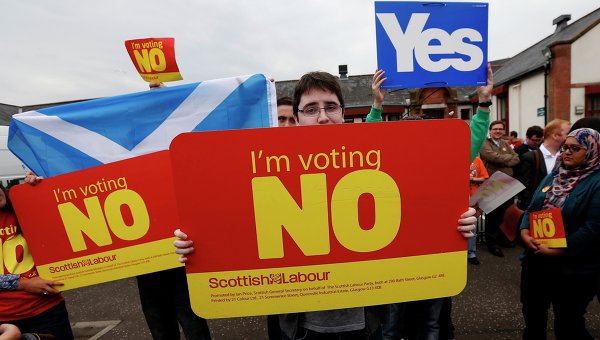 PDP congratulates Scotland over decision to stay under United Kingdom

The Peoples Democratic Party, PDP, on Friday in Abuja applauded the decision of Scotland to remain under the United Kingdom and urged Nigerians to remain united.

Olisa Metuh, the party’s National Publicity Secretary, in a statement, said the decision showed that citizens could indeed push through their resolve to live together peacefully.

He added that the decision further proved that citizens could leave together as one people with a common destiny in spite of perceived or real differences.

Mr. Metuh stressed the resolve of Nigerians to live in a united and peaceful nation “just like the people of Scotland had chosen to preserve their over 300 years union by voting to stay in Britain”.

This, he said, was irrespective of their challenges of ethnic diversity.

“We might be different in our tongues, tribes and religious affiliations but, as one people, let us not dwell on these differences.

“But rather magnify those things that bind us together so that we continue to live together in peace, love and unity,’’ Mr. Metuh said.

According to him, the challenges facing the nation, are transitory and incapable of defeating the collective spirit of the people.

He, therefore, urged Nigerians to ensure that their thoughts and actions were always guided by national interest and values that would unite and bind all citizens in love.

The PDP spokesman added that it was incontrovertible that Nigeria remained stronger and more prosperous as one nation.

The statement called on citizens to put the unity of the nation above every other personal and sectional interest in their dealings and aspirations.

It charged all PDP elected and appointed officials at all levels of government nationwide to redouble their efforts in the prudent handling of resources as encapsulated in the party`s manifesto.

This, it said, was critical to ensure that the people would not only continue to enjoy the benefits of having the PDP in power but vote enmasse for it in the 2015 general elections.

Majority of voters in Scotland voted to stay in the United Kingdom on Thursday.