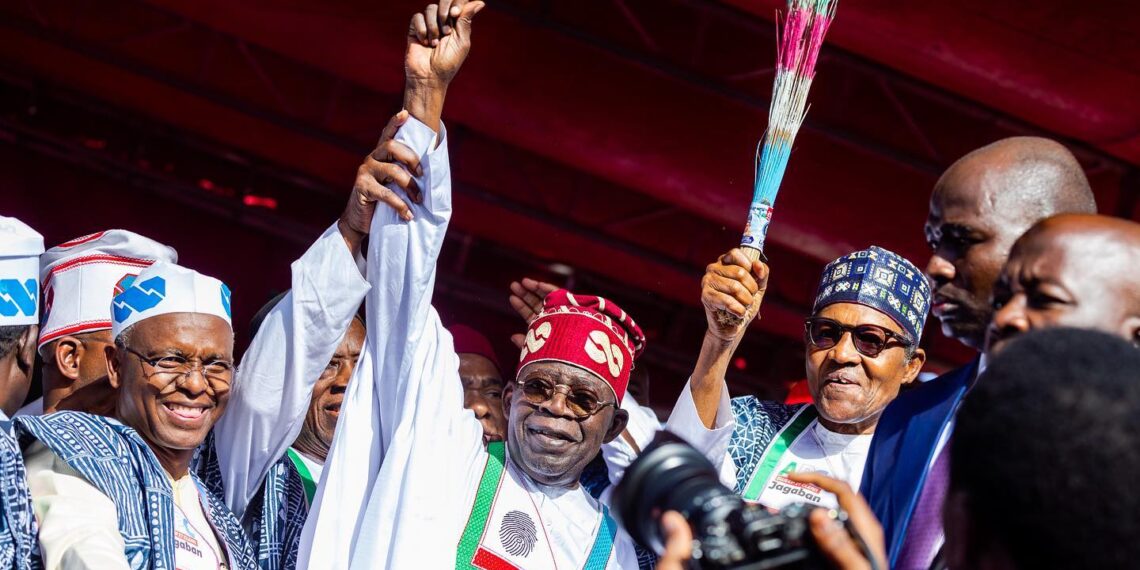 The APC Presidential Campaign Council announced a review of its campaign timetable, showing that President Muhammadu Buhari will be joining the campaign train.

After a six-day Christmas and New Year break, the ruling All Progressives Congress (APC) and its presidential candidate, Bola Tinubu, last week resumed their presidential campaign activities with three rallies within the week in Kano, Edo and Ondo State, and with a town hall engagement with youths.

Most importantly, the Presidential Campaign Council of the party announced a review of the campaign timetable, showing that President Muhammadu Buhari will be joining the campaign train. The decision of Mr Buhari to stay away from the campaign had generated concerns within the party, as many viewed it as a sign of cracks in the ruling party.

The disquietness prompted the presidency to issue a press statement in December to dismiss speculations that president Buhari was not enthusiastic about Mr Tinubu’s presidency.

PREMIUM TIMES had also reported that Messrs Buhari and Tinubu held a closed-door meeting at the villa amidst the report that President Buhari was intentionally staying away from the campaign despite his promise of leading it from the front.

Opposition parties’ operatives have interpreted Mr Buhari’s “body language” to show all was not be well with the campaign.

However, Festus Keyamo, one of the spokespersons of the APC PCC, during an interview on Arise TV, said Mr Buhari’s seeming detachment was because he is not seeking to instal a puppet as former President Olusegun Obasanjo did in 2007 when he campaigned across the country to ensure the Umar Yar’Adua won the 2007 election.

“President Buhari is not like Obasanjo, who wanted to instal a puppet. You saw what he (Obasanjo) did in 2007, that was not salutary, to all patriots — that was when the do-or-die mantra came up. If you remember sir, it was then that he said this election is do-or-die for him. A leader should not behave like that. President Buhari is shoulders above Obasanjo in this respect. He was there at our flag-off in Jos,” Mr Keyamo said.

The choice of Adamawa as the first campaign stop is striking, considering that the PDP candidate, Atiku Abubakar, is from that state. However, President Buhari is equally popular in Adamawa, if the result of the last presidential election is used as a yardstick.

APC in Adamawa State appears to have put its house in order and is ready to rally around its governorship candidate, Aisha Binani. The internal wrangling in the post-primary election between Ms Binani and a close associate of Mr Tinubu, Nuhu Ribadu, was on for a while.

Ms Binani, perhaps to force the hands of Messrs Tinubu and Ribadu, withdrew from the Presidential Campaign Council while the political tussle was ongoing.

Eventually, Mr Ribadu opted not to appeal the judgment of a lower court on the dispute, thus, confirming Ms Binani as the governorship candidate of the party.

Now, it appears that the party is united in the state, save for a former Secretary to the Government of the Federation, Babachir Lawal, and his aggrieved APC Northern Christian Leaders, who are opposed to the Muslim/Muslim ticket of the APC.

Already, the scheduled visit of Mr Buhari is generating a reaction in the state because of venue. The Secretary to the Adamawa State Government, Bashir Ahmad, had written a letter to the Chief of Staff to the President, Ibrahim Gambari, that the Ribadu Square in the state capital is undergoing renovation, and therefore urged Mr Buhari and the APC to reschedule.

More interestingly, Mr Buhari will attend the rally in his state, Katsina State, where he is being expected to help halt the surge in popularity of the PDP and the New Nigeria Peoples Party.

The APC in the home state of the president has been in turmoil since the primary elections. Several lawmakers in the state, including the lawmakers representing Mr Buhari in the Senate and House of Representatives, Baba Kaita and Fatahu Muhammadu, have moved out of the party. Several other members of the House lost their bid to re-contest their seats.

Also, in December, the PDP held its presidential rally, and the large attendance appears to be sending a signal to the ruling party that the state may be up for grabs. But the PDP in Katsina is not without its internal wrangling as former Governor Ibrahim Shema and 10 other members of the Katsina State PDP working committee shunned the rally due to a tussle over the governorship ticket.

Mr Shema and others are opposed to the emergence of Yakubu Lado as the governorship candidate of the party in the state.

Perhaps to avoid taking chances, the APC is deploying Mr Buhari to salvage the situation in the state. What remains unclear is how the president will be able to convince the state to vote for the ruling party despite the general insecurity in the state that has forced many residents to leave. Killings and kidnapping for ransom have disrupted economic activities in the state.

While Mr Buhari could brag about the establidhment of University of Transportation, Federal Medical Centre, and Airforce Reference Hospital – all in Daura, however, the citing of all these projects in Daura by his sdministration is generating disquiet in the state.

No doubt, Mr Buhari has strong electoral strength in both the North-west and North-east but often it appears his votes are non-transferable.

Since 2003 that he first contested, he has consistently gotten over 10 million votes—except 2007 where he got over six million votes.

However, in 2011, his Congress for Progressive Change (CPC) produced only one governor during the general election, despite Mr Buhari receiving over 12 million votes in the presidential election.

During the last election, he won Kano, Sokoto, and Bauchi with big margins, however, two weeks after the presidential election, his party lost the gubernatorial elections in Bauchi and Sokoto, and survived in Kano after a controversial run-off.

Furthermore, Mr Buhari has a history of not staking political capital unless his personal political quest is on the line. In 2019, during the tussle in Ogun State, between Adekunle Akinlade and Dapo Abiodun over the governorship ticket, President Buhari asked voters to vote APC at the presidential election and their choice at the governorship election, even though Mr Akinlade and allies had decamped to APM.

“On Saturday, February 16, you are to vote for Presidential candidate of the APC. But I want to urge you to choose whoever you like across the parties as governor of Ogun State.

In essence, Mr Buhari told the party faithful to vote for him and do whatever they wanted during the governorship election.

Similarly, in the tussle between Henry Nwosu and Hope Uzodinma in Imo State, Mr Buhari repeated the same statement.

“You can vote for whosoever you want, do not allow intra or inter party affairs stop you from voting for the candidate of your choice,” he said.

In a race that appears to be close, APC appears to be ready to deploy every arm in its arsenal, including a reluctant Chairman of the Campaign Council.

Division of Labour between Tinubu and Shettima

When Mr Tinubu was in Edo State, his running mate, Kashim Shettima, was in Rano and Gaya paying homage to traditional rulers in Kano State. Since the rally in Kano, he has been trasversing the north to gather support for his party. Last Friday, he was at the palace of the Emir of Gumel.

Visiting of traditional leaders outside the state capital was experimented with in December when Mr Tinubu insisted on visiting Birnin Gwari in Kaduna State despite the security challenges in the area. He also visited the Gbaramatu Kingdom in Delta State.

The ruling party seems to be deploying the former Borno State governor to visit these strong traditional rulers that are outside the state capital in the North. Even though Mr Shettima is of Kanuri ethnic stock, the wide use of the Hausa language in the North can be an advantage.

Mr Tinubu and his campaign have repeatedly taken jabs at the endorsement of Labour Party candidate, Peter Obi, by ex-President Olusegun Obasanjo.

During the rallies in Edo and Ondo, the former Lagos State Governor aimed missives at the former president.

At the rally in Benin City, Mr Tinubu said: “Can Obasanjo recommend a leader for anyone in Nigeria? A man who does not know the way cannot show the way”.

Earlier, Bayo Onanuga, one of the PCC’s spokespersons, described the endorsement by the former president as worthless.

“The endorsement is actually worthless because the former president does not possess any political goodwill or leverage anywhere in Nigeria to make anyone win a councillorship election let alone win a presidential election. He is a political paperweight,” Mr Onanuga said.

Ironically, some close allies of Mr Tinubu once celebrated his “perceived endorsement” by Mr Obasanjo back in 2022.

In August 2022, Mr Tinubu and some associates visited the ex-president in his country home in Ota, Ogun State. The duo met behind closed-door. After the meeting, some of Mr Tinubu’s loyalists interpreted the engagement as an endorsement.

Femi Gbajabiamila, the Speaker of the House of Representatives, told his constituents in Surulere Federal Constituency in Lagos State that Mr Obasanjo said things that reassured him of victory for the APC.

“My people, what I heard there, what Obasanjo said, the victory of Asiwaju is assured.

“Obasanjo spoke at length and we were all happy. He embraced our candidate like a brother, gave him a pat on the back, and prayed for him copiously”, he said.

Some days later, Mr Obasanjo debunked the alleged endorsement and has since shown his preference for the former Anambra State governor.

“Those claiming to be insiders at the meeting issuing statement on the discussion and those crediting to me statement I had not made are enemies of the visitor and are not doing the visit any good,” he said.

To clear all doubts, Mr Obasanjo, in his classic style of letter writing, endorsed Mr Obi, while taking swipes at other candidates and the current administration. He specifically mentioned the “Emi Lokan” slogan of Mr Tinubu.

“Let me say straight away that ‘Emi Lokan’ (My turn) and ‘I have paid my dues’ are one and the same thing and are wrong attitude and mentality for the leadership of Nigeria now.”

Mr Obasanjo has since been able to achieve one thing – he united the APC and the PDP as both camps were unanimous in downplaying Mr Obasanjo’s influence; unlike in 2015 and 2019 elections, when they disagreed on the veracity of the ex-General’s endorsement.