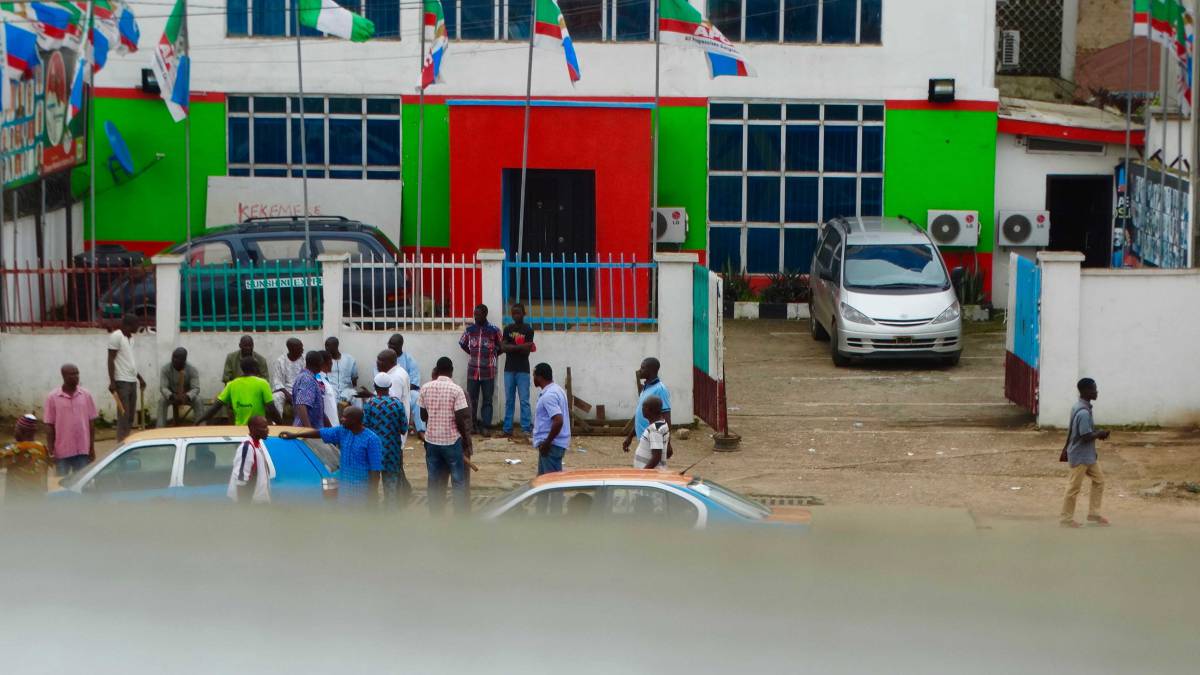 The APC state chairman writes the party's national chairman to complain about the activities of some leaders of the party.

The chairman of the All Progressive Congress (APC) in Rivers State said the party has been reduced to a laughing stock by some “disgruntled leaders” of the party who visit the state on Governor Nyesom Wike’s invitation to commission projects.

“Sir, it is disheartening to note, that any time these disgruntled leaders of the party with anti-party activities running in their veins, which is their stock in trade, visits Rivers State, they will openly make condemnation and scurrilous remarks, thereby demoralizing the spirited and concerted effort of APC members in Rivers State, all in an attempt to please Governor Nyesom Wike, their pay-master,” state chairman Emeka Beke said in a protest letter to the party’s National Chairman, Abdullahi Adamu, on Tuesday.

Mr Beke was reacting to comments made by the former National Chairman of the party, Adams Oshiomhole, and Governor of Ebonyi State, David Umahi, when they visited the state to commission projects executed by Mr Wike.

Mr Beke in the letter demanded an “unreserved public apology” from Messrs Umahi and Oshiomhole for campaigning against the party in the state, or in the alternative the suspension of the duo for “anti-party activities.”

According to Mr Beke, Rivers APC was not bothered about the regular visit of the party leaders but “they must stop talking trash and campaigning against APC Candidates in Rivers State because they want to over rich themselves anytime they visit Rivers State.”

“Sir, most recently, particularly, on 16 November, Mr Oshiomhole visited Rivers State on the invitation of Governor Wike to commission the Rumuepirikorm-Ada George Fly-over.

“During the commissioning, he said ‘I have seen the reason why Governor Wike used to win APC in Rivers State. Mr Wike has very strong and energetic youths he is working with, which he use to win my party. Wike, will you permit me to go with some of them from Rivers State to Edo State.’

“Subsequently, on 22 November, Dave Umahi, visited Rivers State on the invitation of Mr Wike to commission the Akpabu-Omudioga-Egbeda Road and he said ‘Governor Wike you have tried so much, the only day you will see me in Rivers State campaigning is the day we will come here for the Presidential Campaign, apart from that, you will not see me again because all other positions, you will win.”

Mr Beke said both statements were made on live television and that the party’s national leadership cannot pretend not to be aware of it.

He questioned why the statements were made during the electioneering period and by those who are leaders of the party in their states and threatened retaliation if the matter is not properly handled.

“Remember, we are not restricted from visiting Edo and Ebonyi States to reply Mr Oshiomole and Mr Umahi while also romancing with the opposition.

“While thanking you in anticipation that our request will be implemented, we urge you to make haste while the sun shines as ‘A Stitch in Time, Saves Nine,’’’ Mr Beke said.

Rivers APC has witnessed an exodus of its members, including a former spokesperson, Chris Finebone, who also defected to the ruling Peoples Democratic Party (PDP) in the state where he was appointed Commissioner for Information a few weeks later.

After the APC presidential primary where a former governor of the state, Rotimi Ameachi, contested but lost to Bola Tinubu, the party in the state has suffered many challenges.

Mr Amaechi has remained in the party but has not been active in its activities.

Like Mr Ameachi, the state governor, Mr Wike, was also a presidential candidate but lost to former Vice President Atiku Abubakar for the PDP ticket.

After the primary, Mr Wike fell out with Atiku for allegedly failing to fulfil an alleged promise to ensure the exit of Iyorchia Ayu as the National Chairman of the party.

Mr Wike now leads a group of five PDP governors (G5) who are demanding the replacement of Mr Ayu with a southerner to correct a “regional imbalance” in the PDP since Messrs Atiku and Ayu are both northerners.

The G5 members – including Governors Samuel Ortom (Benue), Ifeanyi Uqwuanyi (Enugu), Seyi Makinde (Oyo), Okezie Ikpeazu (Abia) and Mr Wike – rejected their inclusion in the Atiku presidential campaign council and have continued to boycott the activities of the campaign.

APC leaders including the party’s presidential candidate, Mr Tinubu, have tried to take advantage of the crisis in the PDP and have sent many emissaries to Mr Wike to solicit his support in next year’s election.

The APC governors from the South-west geo-political zone had earlier visited Mr Wike to woo him to support Mr Tinubu.

Governor Umahi during his visit to Mr Wike told the Rivers governor that Mr Tinubu needed votes in Rivers State and not logistics support which Mr Wike had promised the presidential candidate of the Labour Party, Peter Obi.