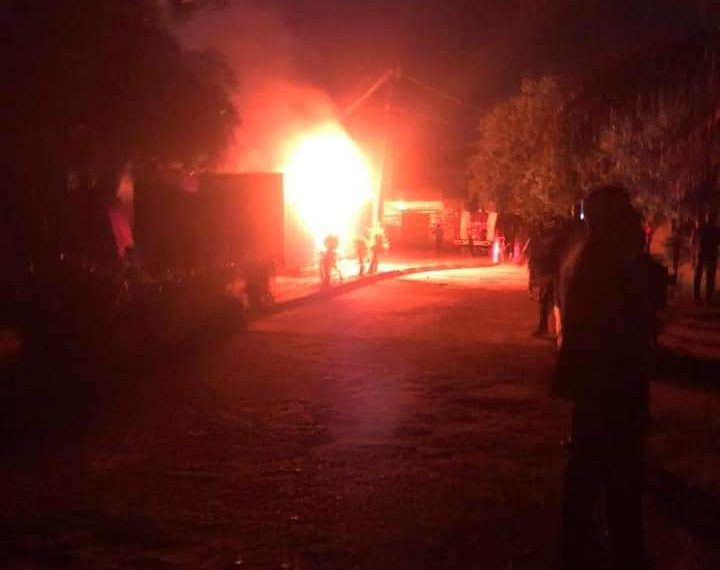 "The building, which is undergoing extensive renovation following an earlier attack, was vandalised and partially set ablaze,” an INEC official said.

The attack is the fourth on INEC facilities in less than three weeks.

PREMIUM TIMES reported that similar attacks were carried out on the commission’s offices in Ogun and Osun states respectively on 10 November.

A local office of INEC was, last Sunday, set ablaze in Ebonyi State, south-east Nigeria, by some unidentified persons. A yet-to-be-determined quantity of Permanent Voters Cards (PVCs) were destroyed in the attack.

The latest incident occurred on Thursday.

The INEC spokesperson, Festus Okoye, disclosed this in a statement on Friday.

“The building, which is undergoing extensive renovation following an earlier attack, was vandalised and partially set ablaze,” he said.

The INEC spokesperson said three of the construction workers renovating the facility were initially abducted by the attackers, but were later released.

“The damage would have been more extensive, but for the quick response of Nigeria Police (Force) which had deployed its personnel to the site,” he stated.

INEC Chairman Mahmood Yakubu said, on Monday, that the recent attacks on its facilities will not stop the conduct of the 2023 general elections.

But Mr Okoye said the attacks on the INEC facilities have now become “too many” and expressed the commission’s concern over the spate of the attacks on its facilities and the negative consequences on its preparations for the 2023 general elections.

Not the first time in South-east

Although the attacks on INEC offices have been happening across the country, the commission has become a target of gunmen across the South-east in recent times.

The attacks have raised fears about holding the 2023 general elections in the region.

About four months ago, some suspected arsonists razed an INEC office in Igbo-Eze North Local Government Area of Enugu State.

Also, two offices of INEC, in May 2021, were set ablaze by gunmen in Ebonyi State. The offices are located at Ezza North and Izzi local government areas of the state.

Another building belonging to the INEC, in May 2021, was also set ablaze in Imo State, Nigeria’s South-east.

The attacks on INEC facilities around the South-east and the South-south regions, as well as on security agencies, have been attributed to the outlawed Indigenous People of Biafra (IPOB).

But the group has repeatedly denied any involvement in the attacks.

IPOB is a group leading agitation for an independent state of Biafra which it wants carved out from the south-east and some parts of south-south Nigeria.