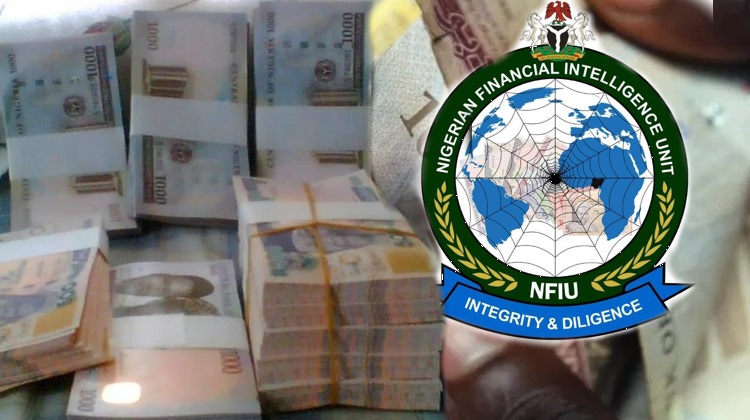 The NFIU said the worth of transactions reported increased by over 22 per cent when compared to the report it received in the same period in 2021.

About N150 trillion worth of transactions were reported as “suspicious” in the first three months of the year by the Nigeria Financial Intelligence Unit (NFIU).

The N150 trillion recorded in the first quarter of 2022 is an increase of about 22.91 per cent from the N108.5 trillion suspicious transactions recorded in the same period in 20221, according to the NFIU.

The NFIU stated that several financial institutions and businesses in Nigeria reported to the Commission the suspected transactional fraud that was recorded over the period.

According to the NFIU index, banks reported the highest number of cases involving “suspicious transactions” at 2,810,213 during the review period. Merchant banks were in second place with 14,810.

The report stated that in the first three months of last year, the NFIU recorded over N108.4 trillion in unsuccessful currency transactions.

According to the NFIU study, Asset Management Companies reported unsuccessful currency transactions totalling N419 billion in the first quarter of this year that did not meet their financial regulatory standards.

NFIU said it received a total of 250 requests for information on security-related matters from the military, security agencies, authorities, and other law enforcement in the first quarter of the year.

According to the report, the NFIU received a total of 103 requests for information on security-intelligence matters from the military and security agencies between January and March of this year. The Commission said it received 67 requests from the agencies in the first quarter of last year — at a difference of 36.

The financial intelligence agency said it received 101 requests for information on security-related issues from ”Other Competent Authorities” in the year 2022 and 11 were received for the last first quarter of 90.

While other ”Law Enforcement Agencies” requested a total of 46 information on security, the judiciary sector requested no information in 2022.

The NFIU received 18 security information from only 11 countries in the first quarter of 2022.

The NFIU said that it sent six security-related messages to the USA, three to the Czech Republic, two to the United Kingdom, and one each to Benin, Malta, South Africa, France, Italy, Turkey, and Taiwan.

According to the report, the number of requests for information that the NFIU forwarded to other nations in the first quarter of 2022 decreased by 26 when compared to the same period in 2021. The unit said it sent a total of 44 information requests on security-related matters to a total of 15 foreign nations.