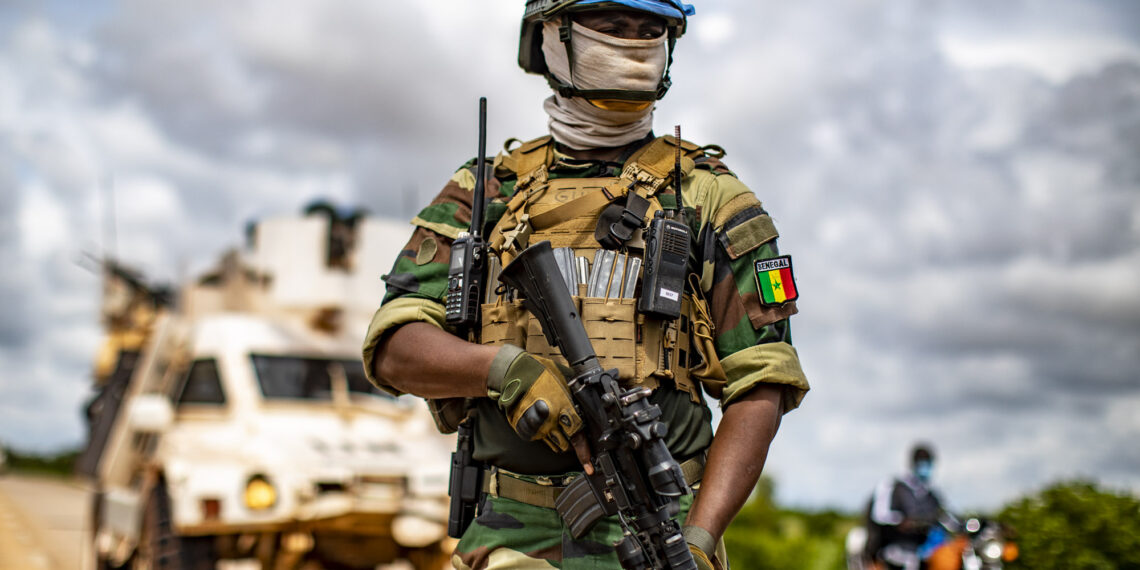 A Senegalese peacekeeper from the MINUSMA (Quick Reaction Force (QRF) provides security for the convoy on the road from Bandiagara to Bankass in the Mopti region where improvised explosive devices (IEDs) and terrorist attacks are recurrent. (Photo credit: © MINUSMA/Harandane Dicko)

Missions struggle to navigate the political minefields that come with the broad goal of stabilising conflict situations.

Peacekeeping is one of the United Nations (UN) most important conflict management tools, but policymakers, host countries and experts agree that it is in crisis. This year has seen a rise in contentious, if not hostile, relationships with African host governments and, to some extent, with urban populations.

Attacks against facilities of the UN peacekeeping mission in the Democratic Republic of the Congo (DRC) due to its perceived ineffectiveness against armed groups led to the death of three peacekeepers and several Congolese civilians. Tensions between Mali’s military authorities and the UN mission there worsened to the point that the UN couldn’t monitor the human rights situation in areas where the Russian Wagner group was deployed.

In the Central African Republic (CAR), the use of private Russian soldiers followed a period of conflict between the government and the UN mission. The peacekeepers were seen as inefficient in helping the government restore its authority. As President Faustin-Archange Touadéra embarks on a highly contested constitutional review process aimed at extending his stay in power, the UN mission will navigate uncharted waters.

This extended scope – often mocked as ‘Christmas-tree mandates’ – has changed the status of UN missions. Now, multidimensional stabilisation resembles whole-of-society and whole-of-government approaches that push missions to work closely with the host country’s government. This often exposes the UN to opposition and accusations of partiality from civil society leaders.

Also, demagogue politicians see this as an opportunity to deflect from their failures and use the UN as a scapegoat for society’s ills. In recent years, this has happened to varying degrees in the DRC, Mali and CAR. This places the UN at the centre of the political game in host countries as it presents a critical resource that socio-political actors often fight to access.

The UN’s 2015 Report of the Independent High-level Panel on Peace Operations rightfully emphasises the primacy of politics in peacekeeping. But are UN missions properly equipped to handle the political challenges they face in host countries? On the ground, most missions seem reluctant to engage in the politics of managing relationships with host governments and populations.

As the future of peacekeeping is debated, the UN Secretariat should consider assessing the capacity of its missions to navigate the political minefield they operate in. This is particularly necessary for large operations with a stabilisation mandate that has existed for a decade or more.

Long periods in one country often create more problems for peacekeepers to solve. Their little-known successes, especially in the humanitarian and economic domains, tend to make sitting leaders less inclined to carry out the reforms needed for durable stabilisation.

One of the most challenging aspects of multidimensional stabilisation missions is assessing their goals and effectiveness. There is wide acknowledgement that stabilising societies undergoing or exiting violent conflict is complex. Recent failures in Iraq and Afghanistan should caution the UN against broad peacekeeping mandates and heavy operations.

Such approaches fuel the popular belief that the missions are a substitute for sitting governments, but without the attendant legitimacy and accountability. This contributes to false perceptions that peacekeeping is a cash cow for UN staff and a mechanism for funders to preserve their interests. In contexts where digital disinformation fuels anti-Western sentiments in Africa, peacekeeping missions become collateral damage.

On 14 November, the peacekeeping world commemorated former UN Secretary-General Boutros Boutros-Ghali’s 100th birthday and the 30th anniversary of his seminal Agenda for Peace. The time is ripe for a new conceptual framework. The classic doctrine of a non-combatant force has been reaffirmed, but the UN needs to rethink the political and security environments in which peacekeepers are deployed.

Inspiration can be drawn from the Powell Doctrine designed by the United States (US) in the 1980s following the Vietnam War. The approach identified criteria to guide US military deployment, including vital interest, full intention to win, adequacy of the force with the objectives pursued, support of the opinion and by Congress, and military intervention as a last resort.

Three ideas could be explored in this regard for peacekeeping. First, the scope of the mandate should not exceed more than three goals, mainly in the political and security fields. Second, a time limit on the UN mission’s presence on the ground is needed to avoid internal complacency around mandate renewals and help ensure professional and ethical conduct.

Third, bi-annual assessments should involve national stakeholders from governments and civil society to ensure a degree of local ownership of mandates. Even more important, initial UN mandates should undergo a thorough and independent analysis of the political contexts in host countries. Tracking the evolution of these contexts should also not be left to the UN alone.

The UN should develop a set of measures to assess the local acceptance of peacekeeping missions. These can serve as early warning tools and guide against targeted disinformation campaigns, particularly when they involve public officials.

Peacekeeping missions are vital to address international security threats. But equally important is rethinking their shape and form to ensure their effectiveness and local legitimacy. This is crucial at a time when power games in the UN Security Council increase the scope for using peacekeeping to set specific agendas.