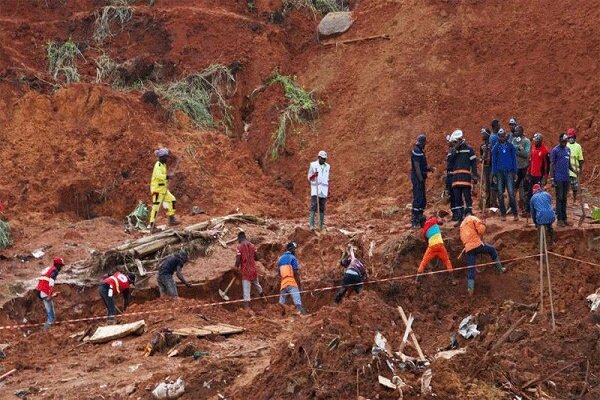 The scene of Cameroon landslide

Mr Bea described the area where the landslide took place as a “very dangerous spot.”

At least 14 people Sunday died from a landslide that occurred during a funeral ceremony in Yaoundé, Cameroon.

Al Jazeera reported that the number of confirmed death was given by the regional governor, Naseri Bea, as rescuers continue to search for dozens of others who remain missing.

Mr Bea described the area where the landslide occurred as a “very dangerous spot.” He encouraged people to stay away from the Damas district in Yaounde’s eastern outskirts.

According to Al Jazeera, the disaster occurred as people gathered on a football pitch at the base of a 20-metre-high soil embankment.

Landslides occur relatively frequently in Cameroon but are rarely as deadly as Sunday’s incident in Yaounde.

Also, 43 people were killed in the western city of Bafoussam in 2019 when a landslide triggered by heavy rains swept away a dozen precarious dwellings built on the side of a hill.