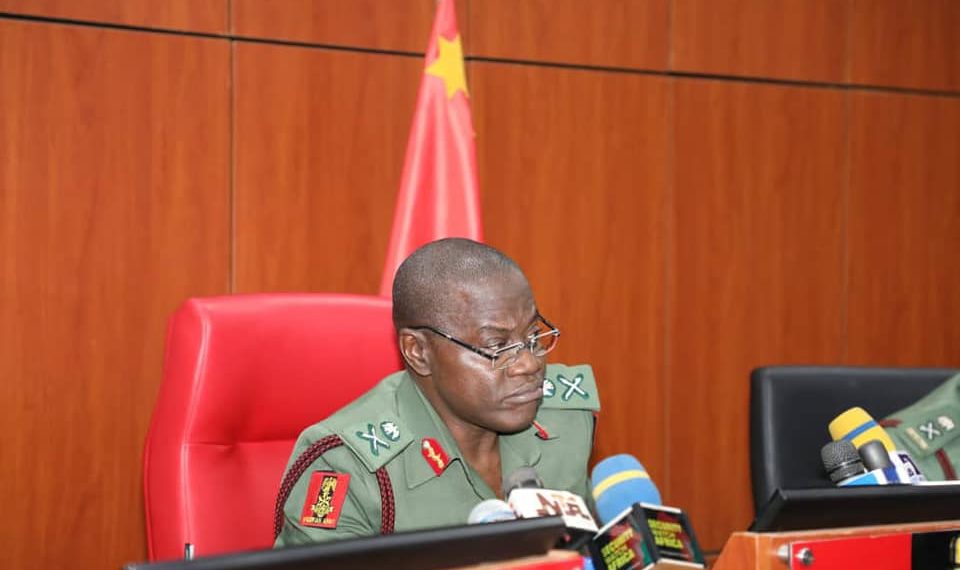 E Ali, a lieutenant, posted a video clip from his wedding on a WhatsApp group page he shares with his course mates.

A Nigerian Army officer has run into trouble for posting a video clip of his wedding on social media.

The Nigerian Army has been asked to punish E. Ali, a lieutenant, as well as 13 other officers who attended the wedding, for allegedly flouting army traditions at the event.

In an internal memo dated 28 October, seen by PREMIUM TIMES, the military police said the officers violated the army traditions on social media usage, dressing and etiquette on military marriage.

The Military Police said an investigation revealed that the officers breached the Nigerian Army code of ethics in the incident. It also charged them with “disobedience to standing order” and recommended punishment for the alleged infractions.

The memo was signed by NH Longpoe, a lieutenant colonel in the Military Police, and was received by the Nigerian Army on 7 November.

According to the memo, the groom posted video clips from the wedding on a WhatsApp group page he shares with his course mates.

The memo did not state the names of other affected officers, or when and where the wedding took place.

“Lt E Ali (N/18406) should be charged with Disobedience to Standing Order punishable under Section 57(1) of the AFA CAP A20 LFN: 2004 for contravening Paragraph 11 (g) of the DHQ Policy on the use of Social Media for the FN 2018 by posting his wedding video clips on D$SC Course 25 WhatsApp forum,” the memo reads.

“One EE Ukhabi and 12 others will also face disciplinary action for participating in paying formal hand salute and doing push-ups in honour of the bride during the wedding ceremony of Lt and Mrs E All in violation of Paragraph 46 of the Traditions, Custom and Ethics of the NA 2005.”

Mr Lomgpoe further said that Ukhabi and some officers mentioned earlier will be punished for appearing in “NA No 1 Dress without ceremonial jacket.”

This, the military said, contravened paragraph 38 of the NA Dress Regulation of 2005.

The memo, however, did not state the nature of the punitive measures it was asking for against the officers.

According to the army’s “Policy on the use of social media for the Armed Forces of Nigeria,” the military considers certain actions as punishable offences.

“Flouting rules and regulations guiding marriages by posting compromising pictures and videos taken in uniform before, during and after the wedding ceremonies,” the document stated.

This is not the first time military officers will be in trouble for running foul of Nigerian Army traditions. In 2018, 149 personnel were sanctioned for uploading their pictures on social media.

Asked by PREMIUM TIMES to speak on it, a human rights lawyer, Jiti Ogunye, said there is nothing strange in the latest development but advised the armed forces to reconsider their rules to reflect the digital age.

Mr Ogunye said the public must realise that the military is a “regimented force” and that the conduct of its members is regulated by the Armed Forces Act and regulations laid under the Act.

“To that extent, the constitutional right and liberty that are available to Nigerians at large are available to men and officers of the Armed Forces as well but these rights are constrained,” he said.

“These rights are circumscribed by virtue of the fact that these men and officers have voluntarily taken the uniforms and have subscribed to military discipline, regimentation and martial law.”

Mr Ogunye said that if there was a violation, and there was an imposed sanction but the officers are not satisfied with the sanction, “such officer can seek remedy within the scheme of military justice that will be dispensed thereafter and can ultimately approach the court in respect of that.”

The lawyer, however, said that in light of the digital dispensation, the Armed Forces need to reconsider their rigid system and ensure that their rules conform with certain human rights as guaranteed by the constitution.

“We live in an information age and a digital age, and I think that the constant clash between military formalism are rigid adherence to order, oaths, signals and regulations would have to be interrogated and reconsidered in the light of the creativity, the creation, technology, the modernity that are at play here,” Mr Ogunye said.

“This alleged misconduct will have to be reconsidered. Is it totally out of place for men who are in uniform to be socialised in the Nigerian family, regardless of the fact that they are in the military, in this digital age, in terms of using social media – Facebook, WhatsApp, which is an enabler of the fulsome enjoyment of the rights to disseminate information and receive information and impart ideas under section 39 of the constitution and article 19 of the United Nations charter?

“More so, when we have seen in recent times, the same military men using social media to celebrate their victory in the forest against Boko Haram and the likes.

“The question is that, if soldiers are permitted to be singing and to celebrate their victory, for busting the enemy or killing them, and they are not penalised, why is a soldier penalised for celebrating his marriage?”