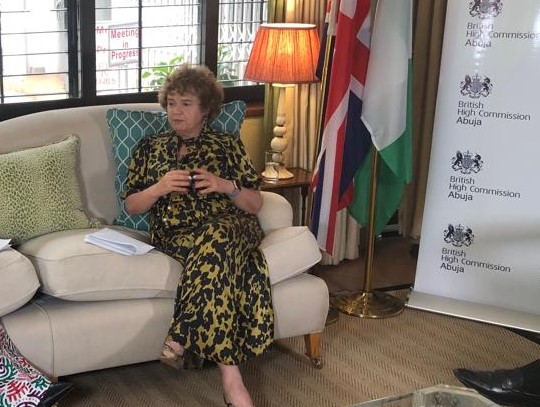 “We will also be watching closely any individual who acts violently or incites people through the social media; we do have the possibility of using our Visas as sanction by removing Peoples rights to visit the UK.”

The United Kingdom (UK) says it is watching closely all political parties, security agents or individuals that act violently or incite people through social media in the 2023 general election in Nigeria.

The British High Commissioner to Nigeria, Catriona Laing, stated this when she led a team to a meeting with the National Working Committee members of the Peoples Democratic Party (PDP) on Wednesday in Abuja.

Ms Laing said that the 2023 election is very important to Africa and the world, hence the spotlight would be on Nigeria and the UK will be watching closely.

She said the UK had been really concerned about the recent events, including 52 election violence related issues in 22 states, including an attack on the PDP convoy in Maiduguri, the Borno State capital.

“That is a real concern and we want to exchange our thoughts on what you can do as a political party to ensure that the election is as peaceful as possible.

“When people feel intimidated, they can’t get out to vote. The election itself will not be credible that is why the violence is of great concern.

“On the issue of electoral violence, you can make a statement about the last election, as well as we do have positive support, since we do have sanctions in the form of our Visa programme.

“We will also be watching closely any individual who acts violently or incites people through social media; we do have the possibility of using our Visas as sanction by removing Peoples rights to visit the UK.

“We will be watching closely, these apply to all the political parties, not just the parties, but security officials and anybody who might be in that position.

“The important thing is to get the votes out, whatever political party you are, the election will be credible, if the votes are high. It was low last time, around 35 per cent,’’ Ms Laing said.

She said that the UK government was not supporting any political party, but interested in allowing Nigerians to decide who would lead them at the level of government.

Ms Laing said it was in that spirit that the UK delegation had been meeting all stakeholders, including INEC, Civil Society Organisations and political parties for credible and peaceful elections.

She commended Nigerian youth for coming out to register during registration, and expressed the hope that they would turn out to vote on the day of election.

In his remarks, PDP National Secretary, Samuel Anyanwu, expressed optimism that PDP would return to power in 2023, saying Nigerians are waiting for the PDP.

Mr Anyanwu said the PDP believed that with the Bimodal Voter Accreditation System (BVAS) introduced by INEC, the 2023 general election would not be business as usual.

“That is why we keep praying for INEC to maintain what they have promised Nigerians and when that is done we will find out that our party is in top gear.’’