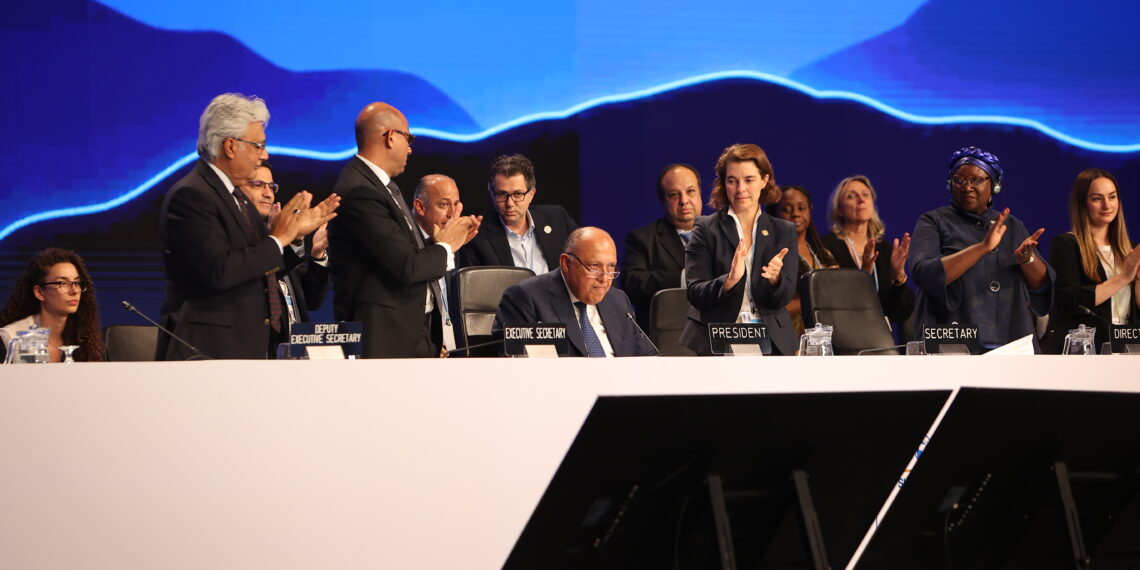 Following the development, the new fund will see donors contribute to a global fund to save lives and livelihoods from climate change-related disasters.

In what could be described as a historic moment, especially for Africa and other developing nations, parties at the United Nations Framework Convention on Climate Change Conference of the Parties (COP27) have agreed to the establishment of a loss and damage fund as part of the Sharm El-Sheikh Implementation Plan on climate change.

‘Loss and damage’ only narrowly made it into the list of the agenda for the conference for the first time after African negotiators asserted their influence.

Following the development, the new fund will see donors contribute to a global fund to save lives and livelihoods from climate change-related disasters.

The agreement saw Parties recommit to keeping the 1.5°C target for global temperature rise intact and significant progress made across the board on climate issues.

After days of negotiations, the conference finally created a facility to respond to the devastating impacts of climate change in vulnerable communities.

The loss and damage fund was decided at the closing plenary of COP at about a few minutes past 4 a.m. Sunday morning. Before then, COP President Sameh Shoukry called for objections, and none was heard.

In his words, “we heard the calls, and we responded. Today, here in Sharm El-Sheikh, we established the first-ever dedicated fund for loss and damage, a fund that has been so long in the making. It was only appropriate that this COP, the implementation COP in Africa, is where the fund is finally established. Millions around the globe can now sense a glimmer of hope that their suffering will finally be addressed, swiftly and appropriately.”

The agreement and pledges made on loss and damage aim to unlock greater ambitions for mitigation and adaptation. During COP27, financial pledges were made for loss and damage from multiple countries during the COP including Austria, Belgium, Canada, France, Germany, and New Zealand, joining Denmark and Scotland, which had made pledges previously.

The Chair of the African Group of Negotiators, Ephraim Shitima, said: “After 30 years of endeavour, on African soil, the world has agreed to establish a new fund and funding arrangements for loss and damage”

The creation of the facility symbolises a full operationalisation of the Santigo Network for LossAndDamage – a network created to catalyze the technical assistance of relevant organisations for the implementation of relevant approaches for averting, minimising and addressing loss and damage at the local, national and regional level, in developing countries that are particularly vulnerable to the adverse effects of climate change.

With this new fund, the third pillar of climate finance has been created. Activation of the facility will lead to the provision of new financial support under Article 9 of the Paris Agreement (PA), in addition to adaptation and mitigation finance, to developing countries.

Previously at COP26 in the UK, the G77 and China proposed a solution to the gap in finance available to address their needs in the form of a Loss and Damage Finance Facility (LDFF). They said the LDFF will be able “to provide new financial support under Article 9 of the Paris Agreement (PA), in addition to adaptation and mitigation finance, to developing countries to address loss and damage.”

However, an agreement could not be secured for the LDFF’s establishment or a process to do so. Instead, the Glasgow Dialogue was established but with no clear milestones and outcomes.

Responding to the loss and damage facility, Minister Gaston Browne, the chair of Alliance of Small Island States, said establishing the loss and damage fund signals that the cost and the burden of the climate crisis will no longer be borne solely by the governments and people most vulnerable to the impacts of Climate Change.

“It is a step toward climate justice,” he said.

The Chair of the Least Developed Countries Group at the United Nations Framework Convention on Climate Change, Madeleine Sarr, said they welcome the full operationalisation of the Santiago Network for loss and damage. “We urge developed countries to provide the required finance to allow the Santigo Network to do its work.”

“On the loss and damage fund, we reaffirm the fund must be an operating entity under the financial mechanism of the UNFCC with new, additional adequate and public finance,” the official said.

The Executive Secretary of the UNFCCC, Simon Stiell, said: “We have established the fund that will form one pillar that will work to assure that loss and damage is addressed.”

“We have determined a way forward on a decades-long conversation on loss and damage.”

Speaking about the year ahead, COP President Shoukry said: “We leave Sharm El-Sheikh with renewed hope in the future of our planet, with an even stronger collective will and more determination to achieve the temperature goal of the Paris Agreement.

“We’ve just adopted the landmark Sharm El-Sheikh Mitigation Ambition and Implementation Work Programme that will hugely contribute to keeping 1.5 within reach, and I trust that we all know what needs to be done to safeguard 1.5 and ensure that we never go beyond.”