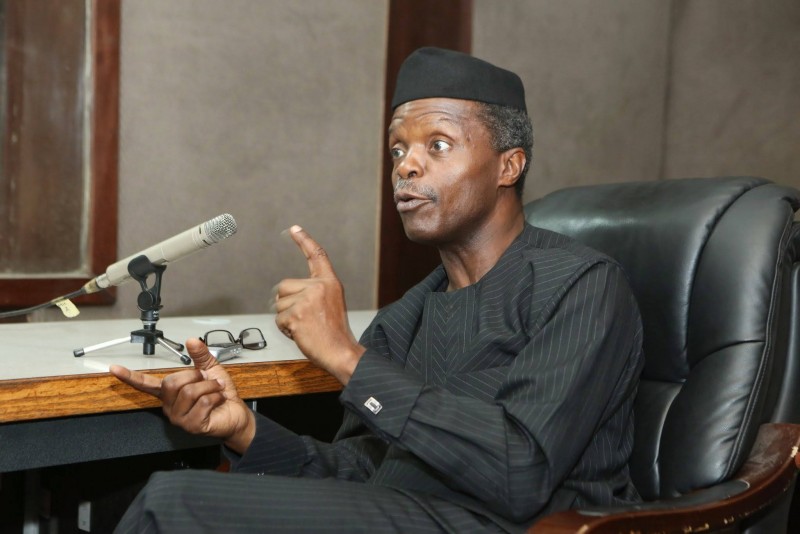 The vice president says while the old models were not perfect, the rules were clear and the gap between the official and parallel markets was not so wide.

The Central Bank of Nigeria operates a managed float system which maintains controls on the naira through its Nigerian Autonomous Foreign Exchange Rate Fixing (NAFEX).

The Nafex was introduced by the bank in 2017 to deal with foreign exchange crisis that affected the value of naira at the time. The daily Nafex rates are determined from rate submissions by 10 contributing banks who bid for forex on behalf of their clients.

The model has not done much to improve the value of the naira which has declined to about N444 at the official market, and to more than N800 at the unauthorised parallel market.

“Our exchange rate regime remains of concern,” Mr Osinbajo said at the Nigerian Economic Summit in Abuja on Tuesday.

“The discussion that we must have, shun of sentiments, is how best to manage the situation by finding a mechanism for increasing supply and moderating demand which will be transparent and will boost confidence.

“While they may not have been perfect, the rules were clear and the gap between the official and parallel markets was not so wide,” Mr Osinbajo, who leads the government’s economic team, said.

He said in addition to the monetary measures being taken by the Central Bank of Nigeria, Nigeria needs to increase domestic production of food and ensure they get to the market.

Mr Osinbajo called for urgent action to bring inflation down.

“Inflation in Nigeria is partly structural arising from infrastructural deficiencies, but there is also an aspect that is caused by increased money supply, imported inflation and depreciation of the naira,” he added.

To reduce inflation, he said the nation must pay closer attention to the institutional insight of the Agriculture for Food and Jobs Programme of the government’s Economic Sustainability Plan which sought to support small-scale farmers.

The programmes guarantee uptake of their production through enabling bigger farmers, suppliers to manufacturing companies and commodity exchanges to support them across every stage of production.

“It is now evident that if there is one global issue that will impact local economies most profoundly it is climate change,” he said.