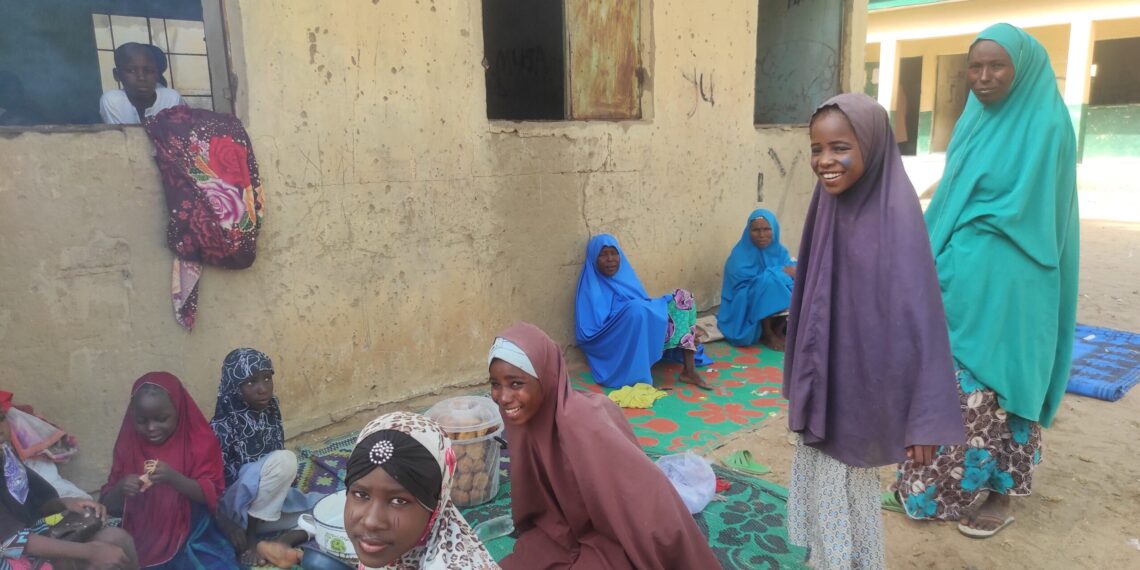 Forty-five year old Zulai Isa held her second daughter’s hand and looked on in total confusion, as though she was in a fix. Her husband had joined others in rescuing a neighbour who was almost trapped in a flooded building. Mrs Isa knew she would have to follow other women being led to the Internally Displaced Persons’ Camp at Ramat Primary School in the central area of Gashua, Bade local government area of Yobe State. But she told PREMIUM TIMES that she was afraid of going to the IDP camp.

“It is very confusing for me,” she said, looking keenly into the eyes of her sick child, Yau Isa, who had been battling malaria.

“What would be my fate and that of my children if I go to the camp? I hate the experience of living in an IDP camp. I just hate it because it’s dehumanizing.”

Mrs Isa said she visited people at IDPs camp at the height of the Boko Haram insurgency and the experience was ‘heart breaking’.

“I was thinking of several things at once,” she said. “The congestion in the room I went to at the camp in Borno was dehumanizing and I thought diseases would quickly spread here.”

Between August and October, devastating floods ravaged several communities across Nigeria, leading to death, destruction of farmlands and houses. In Yobe State, the worst hits areas are mostly in the northern part of the state. The Executive Secretary of the State Emergency Management Agency, SEMA, Mohammed Goje, said the flood was the worst flooding experienced in the state in the last 70 years.

The floods also destroyed hundreds of hectares of rice farmlands, including other crops like maize, millet, and sesame.

He said: “Over 2,000 have been displaced due to this flood in zone C. Most of them are being kept in schools, especially in Gashua. Some of them have left back to their homes but those whose houses have been destroyed completely couldn’t go back yet.”

He added that the emergency agency in collaboration with the local government areas and other donors have been providing food to the IDPs. Mr Gasma said the camps are being led by officials from SEMA and local government councils to ensure the well-being of the IDPs.

“We provide them with food every day. The worst affected area is Jakusko in terms of destruction and we’ve spent over three million naira just to buy empty sacks to fill it with sand in order to divert the water. But in Gasmu and Jakusko, we have over 400 houses that have been destroyed,” Mr Gasma said.

Mrs Isa now resides at Ramat Primary School as an IDP and aside from the trauma of losing almost everything to the flood, she said her children have been showing signs of sickness. One of them, the only son, Ya’u, is down with malaria, she said.

When PREMIUM TIMES visited the camp in October, Ya’u was seen lying on a mat outside a classroom that serves as their room.

“I’ve headache and I drink a lot of water especially at night,” Ya’u told PREMIUM TIMES. “But I don’t vomit… Please, I want to go home because this place smells,” he said as he struggled with a cough.

Though they have not gone to the hospital because they had no money, Mrs Isa told this reporter that an official of the camp told her that her son is battling malaria.

In the three primary schools PREMIUM TIMES visited, most of the children were coughing. At the Almajiri Comprehensive School on the Yusufari bye-pass road, a lady, who simply identified herself as Indo, ran toward the reporter and shouted: “please, help us with the drugs for coughing. They said they’re bringing medicine for our children.”

The classes in all the schools are mostly with shattered windows and doors, thus exposing the IDPs to mosquitoes and cold in the night.

Rukayya Isiyaku, another IDP from the Jakusko area, said two days after they arrived at the camp, her daughter, Aisha Isiyaku, started coughing in the night.

“Now, she does that even in day time and despite the drugs given to her by the official, the coughing has persisted.”

The 3-year-old Aisha could barely respond to questions as she coughed incessantly and cried.

“This is how she does it always,” the mother said. “She will cough for some time then break into tears.”

Aside from little Aisha, there were over 14 children with severe coughing in the various camps visited but all the officials said they were doing their best to provide relief and comfort for the IDPs.

At the Ramat Primary School IDP camp, Fatsuma Gambo narrated how she lost her daughter, Fatima, four days before PREMIUM TIMES visited the camp in October. The 16-year-old Fatima was a sickle cell patient that had been managing her health quite well until their house was submerged in waters and she had to relocate to the camp with her mother, Mrs Gambo.

“Few days after we came here, she started becoming weak but you know how sickle cell patients are. So, we thought it was normal until it became obvious that it was not just the sickle issue and we took her to hospital,” Mrs Gambo said.

The Yobe Specialist Hospital is located a few metres away from the primary school that serves as the IDP camp and when in the night, Fatima became very weak, the camp officials said they took her to hospital.

“They (health officials) said she was catching a cold and they asked if she was sleeping on the floor,” Mrs Gambo said in a teary voice. “They didn’t know we were IDPs. We don’t have beds or even mattresses. Because of Fatima’s condition, I gave her one of my only two wrappers and a Hijab to spread on the mat and cover herself while sleeping.”

A camp official, Danliti Haruna, said the camps house over 200 IDPs all from the Gashua metropolis while IDPs from other areas especially from Jakusko are camped at the Almajiri school and a comprehensive school being built by the state government.

He said they receive complaints about children falling sick from mothers on a daily basis but efforts are being made to provide adequate medical care to them. Mr Haruna said health officials from the local government council have been visiting the camp and the other camps in the area, a claim the Almajiri school camp official, Muhammad Hussaini, confirmed.

“Everyone here is from Gashua metropolis especially Katunzu, Malenjo, Yabila, Buba Agana, Yamai Sale and other areas. We give them food sometimes once. SEMA has tried the local government council because they have so far provided cooked food for us but it’s mostly once a day,” Mr Haruna said.

Mr Hussaini added that they administer drugs especially for malaria because there are mosquitoes in the camps. “We’ve written to the Social department and I’m sure they’ll respond,” he said.

In all the camps, PREMIUM TIMES saw only three mosquito nets in the classes that served as room for the IDPs. Each family is given two mats without blankets, including Messrs Gambo and Isa who have four children each.

Mr Gasma, the SEMA official, said the IDPs at the state government comprehensive school couldn’t go back to their areas because the floods were devastating.

He said: “I know of all the issues because these are my people. I know they want to go home but the houses are still submerged and some areas are not even accessible not only to them but the government too. There are communities in Bade West that are still flooded and it’ll take you over six hours to access those communities with canoes.”

When Mrs Gambo’s daughter died and her son became ill, Mrs Isa said she made up her mind to go home despite opposition from her husband, who sleeps in a mosque near the IDP camp.

One evening after the Asr prayer, Mrs Isa trekked down to their house in Katunzu deep in the ancient city of Gashua. She was on a mission to assess the house because she thought her husband was not ready to take them home.

“I shed tears,” she said. “I sat there and cried like a small girl because everything was gone.” She returned to the IDP camp but told PREMIUM TIMES that she remains eager to return home because of the rate the children were falling sick at the IDP camp.

Another IDP, Mairo Amadu, said lack of shelter and good food has psychologically affected her well-being and mental health..

“If you’re at your home, no matter what you’ll get something to eat and live the way you want. We’re more than forty in this class. We don’t have bed sheets to cover ourselves, especially the children and old people like me,” she said.

Mrs Amadu, 73, said if she could get someone to build a zinc room for her in what used to be her house, she would be happy to quickly leave the camp.

Most of the IDPs spoken to said they would want to go home but life in most of the places they call home is impossible especially for those from Jakusko and Bursari areas. Aside from the houses that have been destroyed, roads leading to villages are still submerged in water.

PREMIUM TIMES also found that in two of the schools visited, the IDPs were sharing spaces with school pupils.

At the Ramat Primary School that houses IDPs from the Gashua metropolis, a single-storey building and a five classroom block were kept for the IDPs, while the pupils were moved to the remaining classes, now crowded.

A teacher at the school who agreed to conduct this reporter round the school under condition of anonymity said the IDP arrangement has disrupted the school system.

“You’ve seen it for yourself. Look at this classroom. Don’t take picture of the students please,” he said.

PREMIUM TIMES observed that the classroom was filled to the brim with some of the pupils sitting on the floor. Those on the floor were moved out of the classrooms now occupied by the IDPs. Away from the classes, two teachers were seen trying to ward off the pupils from going to the IDPs site.

Immediately after the end of school every day, the teacher said the IDPs often spread out to other classes.

“I understand the situation because these are human beings like us and they’re also from this town,” the teacher said. “But we were told that the IDPs would be here for a week but it has been four weeks and we’ve not seen any sign of them leaving.”

The government needs to act and provide alternative shelter for the IDPs, he said.

Mrs Isa told PREMIUM TIMES that her son is sick and she has no money to take him to the hospital while Mrs Gambo is still mourning the death of her daughter. Both women looked forlorn and frail, hoping that someday their sorrows would disappear and they would return to their homes.