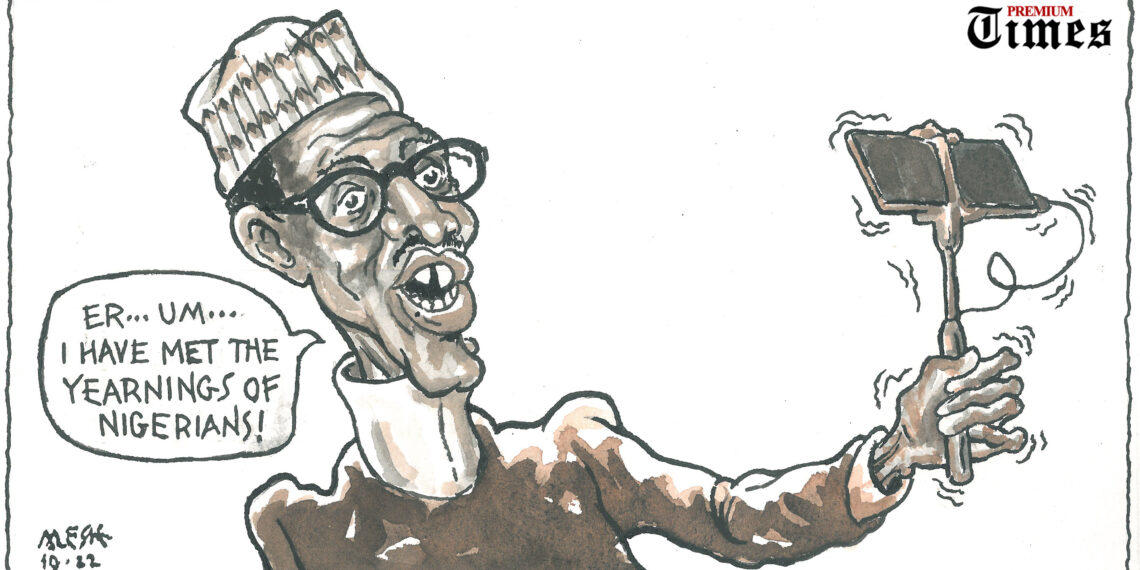 EDITORIAL: Buhari’s fallacy of having met the yearnings of Nigerians

Nigerians need an economy that provides jobs and puts food on their dining tables.

President Muhammadu Buhari’s recent declaration that his administration has met the yearnings of Nigerians indicates the extent to which he is distant from reality and profoundly detached from the lot of the people he governs. With misery defining the lives of ordinary Nigerians, public universities on strike for eight months, and despair being worn as a badge, as it were, by all and sundry due to mounting existential challenges, the president’s self-adulation is a stark caricature of governance.

The just concluded ministerial retreat meant to review performance across the public sector a year after a similar ritual was carried out, provided the platform for the gaffe. The theme of the retreat, “Enhance security, fight corruption and transform the economy”, when placed on an objective plumb, will certainly return the obverse. Non-state actors such as Boko Haram, the Islamic State West African Province, bandits, kidnappers and killer herders are having a barely restrained run, which saw Nigeria ranked second in September as the most terrorised nation after Iraq.

More than 53,418 Nigerians were killed between 29 May 2015 and October this year, on Buhari’s watch, according to the Nigeria Security Tracker. Abuja residents are presently in panic following a US Embassy security advisory, affirmed by other Western embassies, alerting their citizens about an imminent terror attack on the Federal Capital Territory, perhaps similar to that on the Kuje prison by ISWAP in July. Over 800 inmates of the prison escaped during that invasion, including members of the Boko Haram group. Embarrassingly, the horror occurred despite 44 intelligence reports foretelling the incident.

Recurring revelations from anti-graft agencies shockingly indicate how public officials appointed by the Buhari Administration have brazenly joined the caravan of treasury looters, with little or no consequences for their acts. Even some of the president’s trusted associates have vitiated the administration’s pretensions to a corruption crusade in public statements. One of them, Hameed Ali, who is the Comptroller-General of Customs, told the House of Representatives a few weeks ago that the N6 trillion for petrol subsidy in 2022, disbursed through the opaque fiscal template of the Nigeria National Petroleum Company Ltd, is a big fraud. Why? The NNPC releases 98 million litres of petroleum motor spirit to the public daily, whereas its own calculation puts national daily consumption at 60 million litres. This means that about 38 million litres of subsidised PMS released daily is in excess of actual consumption, and this is likely finding its way to markets outside our shores in rank acts of profiteering. As a result, the economy is bleeding. Buhari as the Minister of Petroleum Resources for seven years still has no answer to this dubious activity.

However, what he failed to tell Nigerians is how risky it is to travel on these roads, as kidnapping and killing cases have risen spectacularly. Families of victims are being forced to cough up as much as N100 million in ransom payments per person, if the abductee remains lucky to be alive. Those who travel by rail are not spared either. The first batch of kidnapped victims of the Abuja–Kaduna train attack to be freed – eight in number – paid a total of N800 million in ransom in July. The same month, the president’s convoy was attacked in his home state of Katsina; and in August, some members of the elite Presidential Guards Brigade, his personal security personnel, were ambushed and killed while on surveillance mission in the outskirts of Abuja.

An aggregation of these breaches and tales of unspeakable carnage across the country informed the President’s emotive exclamation, “I share the pains Nigerians are going through…”, in his 1 October Independence broadcast. He continued in that speech, “And I assure you that your resilience and patience would not be in vain as this administration continues to reposition as well as strengthen the security agencies to enable them deal with all forms of security challenges.” It beggars belief, therefore, that three weeks after, the president would claim to have met the yearnings of Nigerians.

Many had thought that the reason for President Buhari’s appropriation of the petroleum ministerial portfolio was to bring sanity to the sector, having once handled it in 1977/78. Surprisingly, he has not done so. The daily crude oil output and quantity exported are not transparently accounted for, or known by all agencies of government that should. It is unthinkable that rogue oil tankers or vessels enter Nigeria’s maritime waters, load the country’s crude oil and successfully disappear without triggering sensors or trackers that easily flag such illegality in other jurisdictions running oil economies. This is why the country is presently on a fiscal cliff, sometimes producing below one million barrels per day, as against its OPEC allotted production quota of 1.830 million barrels per day. The net effect has been the on-going crippling foreign exchange deficit, while other oil producing nations are making a kill from the rising crude oil prices.

A report on massive oil theft, which Ehiozuwa Agbonayinma, a former Chairman, House Committee on Nigeria/US Parliamentary Relations, revealed on national television recently is very damning and disturbing. A regime serious about fighting corruption would have latched on to this to rein in the masterminds of the nefarious acts. Earlier, the Goodluck Jonathan administration had engaged the services of a firm that visited 41 out of 51 countries and documented the quantities of undeclared Nigerian crude oil sold in the US, India, Italy, Indonesia, Ireland, Ivory Coast and Netherlands; the ports where they were sold, and the banks into which the proceeds, amounting to $123 billion, were paid. The Eighth House of Representatives conducted an investigation into this interconnected criminal activities.

Ironically, a government that has met the people’s yearnings could not have developed cold feet in taking decisive steps against economic sabotage of this monumental dimension that involves international oil companies, public officials and military personnel. PREMIUM TIMES considers the Buhari regime’s silence on this matter – a vice that successive administrations in the country have been accustomed to since 1999 – as conspiratorial, indecent and intolerable.

A country whose food inflation reached 20.57 per cent year-on-year in January 2021, making this the highest of such in 11 years; one flagged by the World Poverty Clock as having 83 million of its people as living below the poverty line; with the unemployment rate at 33.3 per cent, which is the highest in 13 years, does not have an economy to be rhapsodised about. In 2015, inflation was at a single digit of 9 per cent, which analysts considered then as high. Earlier in 2014, it was 7.7 per cent. Unfortunately, inflation has headed south for the greater part of Buhari’s regime, clocking 19.64 per cent on year-on-year in July, according to National Bureau of Statistics.

The value of the naira has significantly eroded with progressive devaluation. In August, the Hanke Currency Watch List ranked the naira as the 11th worst performing currency globally in relation to the US dollar. This is evident in the N765 to $1 it traded last week in the parallel market, as against the N197 to $1 it averaged in November 2015 or even the N155 it was the same period in 2014.

Nigerians need an economy that provides jobs and puts food on their dining tables. It is difficult to see how the 3.5 per cent economic growth being flaunted by this regime satisfies these categorical imperatives. It is not for nothing that the First Lady, Aisha Buhari, solicitously apologised to Nigerians over her husband’s performance. This regime should put on its thinking cap and recover the country’s looted funds, especially from crude oil theft in the seven months it has left in office. The country’s debt stock has worsened and should not be allowed to degenerate further. Absurdly, the finance minister has revealed that the Federal Government borrowed N5.33 trillion as of August, N430.82 billion of it in excess of the target to finance the 2022 budget.

The headwind staring Nigeria in the face with the N11 trillion deficit in the 2023 budget, insecurity, hunger in the land, an increasingly weakened naira and many more, are stark realities that belie Buhari’s hollow rhapsody on his achievements.

80% of pesticides used by some Nigerian farmers ‘highly hazardous’