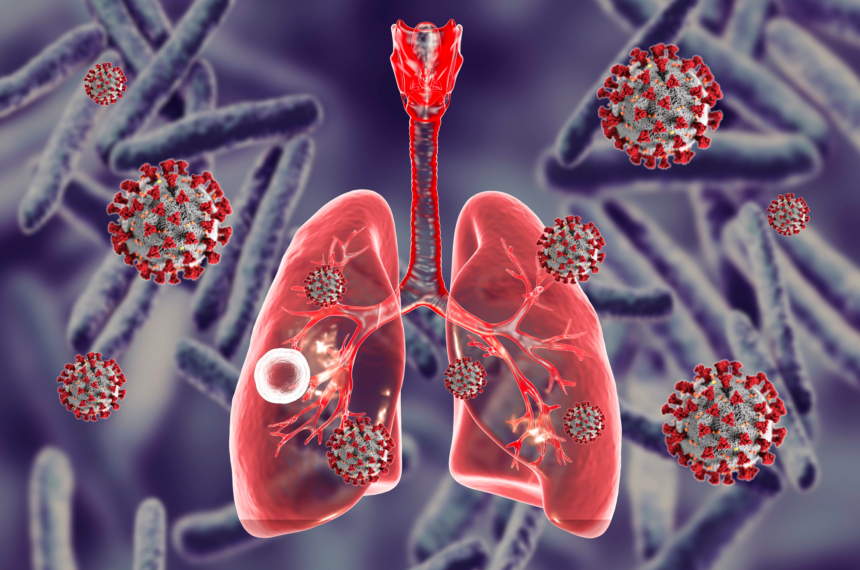 The report indicates that an estimated 10.6 million people were diagnosed with TB in 2021, a 4.5 per cent increase from the previous year

The number of people infected with tuberculosis (TB) has risen globally for the first time in almost 20 years, a new report has shown.

The 2022 Global TB report indicates that an estimated 10.6 million people were diagnosed with TB in 2021, a 4.5 per cent increase from the previous year.

The number of new TB cases had dropped by an average of two per cent in most years since 2000.

TB-related deaths also rose for the second consecutive year to 1.6 million in 2021, according to the report published by the World Health Organisation (WHO). About 1.3 million TB-related deaths were recorded in 2020.

WHO said this is the first time in many years an increase has been reported in the number of people falling ill with TB and drug-resistant TB.

According to the global health body, TB services are among many others disrupted by the COVID-19 pandemic in 2021, but its impact on the TB response has been particularly severe.

It said the ongoing conflicts across Eastern Europe, Africa, and the Middle East have further exacerbated the situation for vulnerable populations.

“If the pandemic has taught us anything, it’s that with solidarity, determination, innovation, and the equitable use of tools, we can overcome severe health threats,” the WHO Director-General, Tedros Ghebreyesus, said.

Mr Ghebreyesus said it is time to put a stop to this long-time killer.

“Working together, we can end TB,” he said in a statement.

TB, which mostly attacks the lungs, spreads through airborne droplets. It can remain latent for many years before it causes health problems and can be difficult to diagnose.

Despite being a vaccine-preventable disease, many people are reported to be infected with TB annually.

The ability to control transmission is limited because the current TB vaccine, known as BCG, is more than 100 years old and has limited efficacy in adults, according to Jamie Triccas, a TB researcher at the University of Sydney.

Mr Triccas said some potential vaccines have reached late-stage trials, but the funding needed to develop them isn’t there.

A 2021 report by the Treatment Action Group and Stop TB Partnership, shows that the total amount of global funding for TB research was $915 million in 2020 – far below the $2 billion goal set by the UN in 2018.

According to the 2022 Global TB report, there was a decline in global spending on essential TB services from $6 billion in 2019 to $5.4 billion in 2021, which is less than half of the global target of $13 billion.

The main source of international funding for TB is the Global Fund to Fight Aids, Tuberculosis and Malaria, which last month received $14.25 billion of the $18 billion it wanted to fund its work for the next three years.

The new report shows that continued challenges with providing and accessing essential TB services resulted in many people with TB not being diagnosed and treated.

There was a partial recovery to 6.4 million in 2021, but this was still well below pre-pandemic levels.

This is resulting first in an increased number of TB deaths and more community transmission of infection and then, with some lag-time, increased numbers of people developing TB.

It said the number of people provided with treatment for RR-TB and multidrug-resistant TB (MDR-TB) has also declined between 2019 and 2020.

The reported number of people started on treatment for RR-TB in 2021 was 161 746, only about one in three of those in need.

READ ALSO: What Nigeria must do to eradicate Tuberculosis by 2030 – Health experts

Ms Kasaeva said this makes a strong case for the need to join forces and urgently redouble efforts to get the TB response back on track to reach TB targets and save lives.

She said this will be an essential tool for countries, partners, and civil society as they review progress and prepare for the 2nd UN High-Level Meeting on TB mandated for 2023.

It indicates that the number of people provided with TB preventive treatment rebounded in 2021 to close to 2019 levels, but the cumulative total of 12.5 million between 2018 and 2021 was still far from the target of 30 million by the end of 2022.

It also shows that TB preventive treatment for people living with HIV has far surpassed the global target of six million in the period 2018-2022, reaching more than 10 million in only four years.

“Seven countries – India, Nigeria, South Africa, Uganda, the United Republic of Tanzania, Zambia and Zimbabwe – collectively accounted for 82 per cent of those started on preventive treatment in 2021.

“Seven high TB burden countries in the region – Ethiopia, Kenya, Lesotho, Namibia, South Africa, the United Republic of Tanzania and Zambia- have reached or surpassed the 2020 milestone of a 20 per cent reduction in the TB incidence rate compared with 2015.”

Articles of Faith: Money changers and launderers, By Femi Aribisala