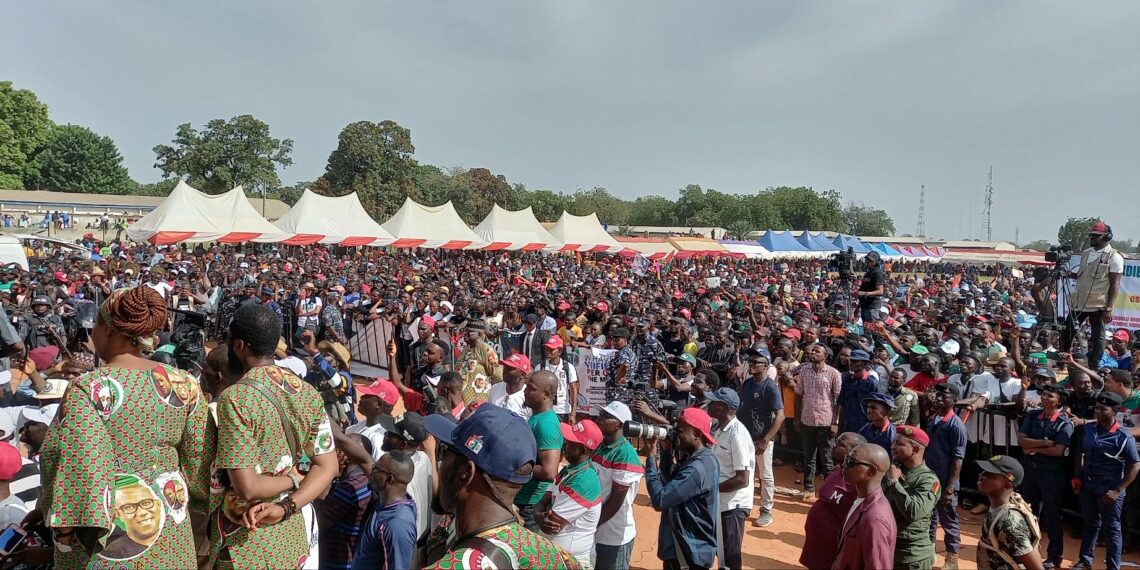 Towards 2023 Elections: Uncertainty as campaigns begin in Nigeria

Tumultuous primaries mean that over half of the federal legislators in the Senate (109) and House of Representatives (360) are not expected to return.

In about four months, Nigerians will know the leaders who will preside over their affairs for the next four years. These elections, much heralded and anticipated, will mark a transition in governance. The incumbent president is term-limited, as are 17 of the nation’s 36 state governors. Tumultuous primaries mean that over half of the federal legislators in the Senate (109) and House of Representatives (360) are not expected to return. These facts alone should highlight the importance of the upcoming contest, but there are many other issues and considerations to focus on.

How secure will the polls be?

Despite the global focus on the terrorist sect Boko Haram, every geopolitical zone in the country faces a form of insecurity. Banditry and kidnapping are prevalent in the North-west, with the Abuja-Kaduna train issue a reminder that even the seat of power is not immune to such attacks. The North-central has reported several incidents of herder-farmer conflicts, which also shows the growing challenge of managing increasingly scarce resources in the country. These conflicts are also present in the South-west, where calls for a regional security outfit have seen a growing schism between the state and federal governments. Cultism and militant activities are still being cited in the South-south and the South-east remains home to the most potent agitations for secession in the country.

The focus on security will affect two dimensions. Firstly, it will be a major factor in how the different government institutions charged with managing the elections respond. The Independent National Electoral Commission (INEC) is the country’s election management body and will hope to allay fears over insecurity affecting its ad-hoc staff around the country. INEC works with many other groups, including university lecturers and recent graduates under the country’s youth service scheme. Amidst the registration and training of this staff, concerns will no doubt turn to the risks of managing the polls in certain parts of the country. Security staff have pledged to complement INEC efforts by being more present and vigilant, but Nigeria’s police force does not have enough to guarantee this. Nigeria’s police-to-citizen ratio was 1:648 in 2018, well above the 1:400 recommended by the United Nations. These concerns will no doubt play a role in guiding the conduct of the polls. The second reason leads directly to another important consideration – the nature of the campaigns.

What will determine the vote?

Muhammadu Buhari was able to unseat the then-incumbent Goodluck Jonathan because voters resonated with his promise to restore security and address corruption. Regrettably, security should remain a focus of voters when they go to the polls. The 2022 Global Peace Index ranks Nigeria 148 out of 163 countries scored, and while that is indeed one spot higher than its ranking in 2015, it shows that little progress has been made in the last seven years. Other issues include rising hunger, attempts to restrict the civil society space, recent clampdowns on freedoms of expression and the looming impact of attempts to remove the petrol subsidy. Independent of party affiliations, the country is at a tipping point and will require impactful leadership which should come from well-detailed and critically assessed policies during the campaign period.

This is why there is concern about the oversized role that religion and ethnicity have played in the current campaign cycle. After eight years of the northern Muslim president, there were calls for a southern Christian to provide balance. However, these agitations simply mask the primary concern that there is a lack of representation and that groups expect to feel better catered to if someone they can identify with is in power. The background of the president has not played a significant role in the issues dominating the North, but allegations of the president’s nepotism and imbalance in carrying out appointments have fuelled this belief. These issues led to calls for the presidency to be zoned to the south by governors from the region and heightened deliberations across the political divide. The ethnicity and religion of candidates became the focal point during the nominating conventions and have become a major part of the candidates of the major parties.

The ruling party, the All Progressives Congress, has nominated Bola Tinubu, former governor of Lagos State (1999 – 2007) and a well-known fixture in Nigeria’s political scene. A southern Muslim, he has since nominated a northern Muslim, Kashim Shettima, fuelling the ire of many who warn against Christian marginalisation if he is successful. His well-known statement that ‘E mi lokan (It is my turn in Yoruba)’ has also been used as a rallying cry for Yorubas from the South-west seeking the presidency primarily on the basis of ethnic representation. The main opposition, the People’s Democratic Party, has renominated its 2019 flagbearer and former vice-president (1999 – 2007) Atiku Abubakar. The nominee is also a northern Muslim and, despite his nomination of a southern Christian governor as his running mate, he faces in-fighting within his party for marginalising the south. Most permutations favour these two candidates since their parties have produced past presidents and control all but one of the nation’s state governorships. But there is a factor expected to play a role in the coming election, a growing youth population prepared to leave a mark in shaping the future of the country.

The increasing population of young voters and the growing impact of social media in the country are reasons why there is optimism about Peter Obi, the former governor of Anambra State (2006, 2006 – 2014) and presidential nominee of the Labour Party. Most of his appeal stems from his increased engagement with Nigerians on social and conventional media and his relative youth – if elected, he would be the first president born after the country’s independence. Obi is still tainted by hallmarks of politicians of this era – he too has moved across parties to actualise political ambitions and was implicated in the Pandora Papers data dump. But his willingness to engage with citizens has ensured that he stands out from the crowd and his performance will be monitored to see the impact of the youth vote and if he is able to increase turnout.

There are more major considerations that will govern the conduct of the polls. For one, INEC used the Bimodal Voter Accreditation System (BVAS) and the Independent Results Voter Platform (IReV) during the recent off-cycle governorship elections in Ekiti and Osun. There was more optimism around the results since citizens could follow results in real-time as they were posted on the IReV portal. Instead of the usual criticism of INEC, both contests were largely dominated by another major consideration – voter trading. Increasing incidents of money being exchanged for votes show the looming threat of transactional democracy, highlighting the impact that poor socio-economic conditions can have on the choice of leaders. And, perhaps most tellingly, is the growing challenge of fake news and the impact that misinformation can have on the elections. These issues are likely to dominate this campaign cycle.

Ultimately, the story of an election is always told in hindsight. It will be told through the narrative that helped a nominee transcend from the pack to gain the mandate of the people. It will be told through the performance of the different institutions that may or may not have influenced the conduct of the polls. It will be told through expected litigation and any potential response to the outcome – peaceful or violent. But there is always a factor or consideration that usually becomes clear despite not featuring clearly in pre-contest prognostications. Hopefully, hindsight will mark the 2023 elections as another step forward towards a more perfect democracy in Nigeria – the country, and perhaps the region at large desperately needs this to be so.

ANALYSIS: State of women’s candidacy ahead of 2023 elections