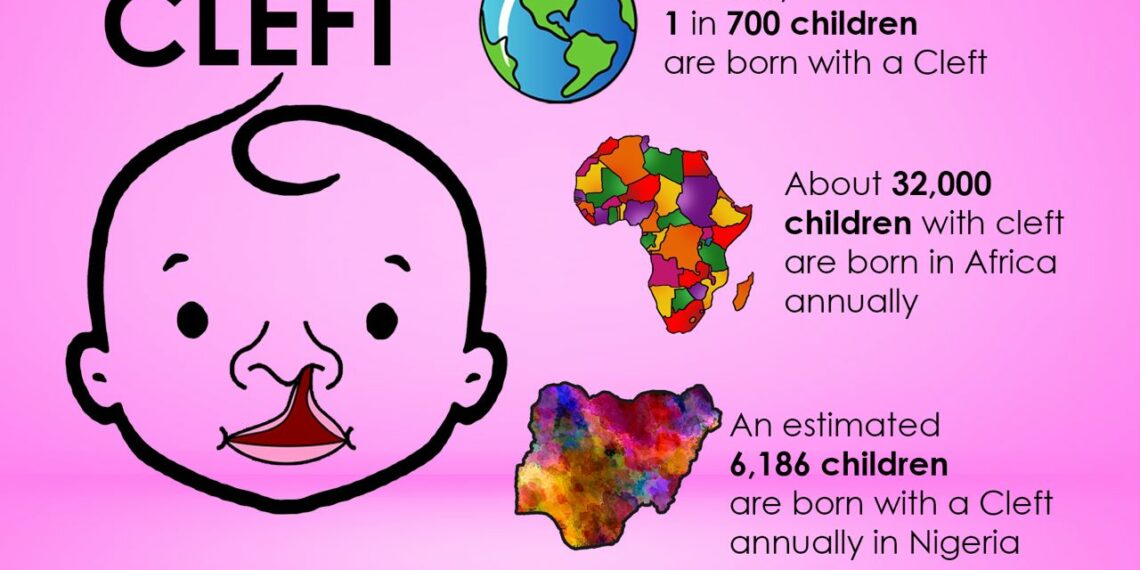 The statistics of children born with a cleft annually

Cleft: How ignorance, stigmatisation pose barrier to treatment in Nigeria

Wearing a scarf around her head and resting her cheek on a bible, Mercy Egbe, 35, was in a ward at the Cleft and Facial Deformity Foundation Centre, Abuja, Nigeria’s capital city, waiting for the return of her daughter from the surgical theatre.

The mother of four had travelled from Ore, Ondo State, a day before to get a surgical procedure for her three years old Sharon.

Sharon was born with a cleft lip, a condition resulting in a split in the upper lip that extends to the nose. It is one of the most common birth defects globally.

Ms Egbe told PREMIUM TIMES how she had hoped for a miracle for the past three years of her daughter’s life.

“Her father was the first to notice the opening on her lips a few hours after she was born,” she said, recalling the struggle of having a child with a cleft lip.

Ms Egbe said in less than three days after Sharon’s birth, words had travelled around their community that she had a child with a cut lip.

This made the family deny Sharon the usual naming ceremony given seven days after birth.

“From that moment on, we faced different forms of stigma from families, friends and members of the community. Many times, I hid her from people,” Ms Egbe said as she cuddled little Sharon who had just been taken out of the theatre.

The fear of exposing Sharon to any form of stigmatisation also informed Ms Egbe’s decision to keep her away from school until she clocked three.

Cleft lip and cleft palate are facial and oral malformations that occur very early in pregnancy while the baby is developing inside the mother.

This occurs when there is not enough tissue in the mouth or lip area, and the tissue available does not join together properly, a consultant maxillofacial surgeon, Seidu Bello, told PREMIUM TIMES immediately after Sharon’s surgery.

Mr Bello said although there are no established causes, scientists believe clefts are due to a combination of genetic and environmental factors.

He said some studies also suggested that poor nutrition, infections, consumption of tobacco, alcohol and certain medicines during pregnancy may be responsible.

“A woman already pregnant for five months can detect if she will deliver a baby with cleft or not with the help of ultrasound,” he said.

Although there are varying opinions on the actual incidence of clefts, most experts agree that in part, it depends on ethnicity.

According to Smile Train, the world’s largest cleft charity organisation, one in 700 children is born with cleft globally.

Children born with clefts find it difficult to breastfeed and also have difficulties swallowing, resulting in malnourishment.

They are also known to have severe speech impairments which makes them subject to stigmatisation within their families and communities, a situation that forces them to isolate themselves from others.

“You will barely see Sharon relating with other children,” Mrs Egbe said. “She prefers to stay alone and when people are around, she covers her mouth with her hands.”

Fortunately, this birth defect can be corrected surgically. Cleft treatment is designed to restore a normal look as well as improve affected functions such as a baby’s ability to suckle as well as the ability to speak properly later in life.

However, if the cleft is not repaired in childhood, such a person will develop speech problems, an oral and maxillofacial surgeon, Adegbayi Adekunle, told PREMIUM TIMES.

Mr Adekunle said problems in one’s ability to speak result in other issues in terms of psychosocial development, communication and the way such a person is perceived in society.

He said it is best to present the child for a surgical procedure in the first year of life.

Sadly, many children with cleft lips or palates are unable to get the help they need, particularly in developing countries like Nigeria.

Lack of income to cover surgery costs, misconceptions, stigma and discrimination associated with cleft patients, and low awareness level are some barriers preventing such children from undergoing the surgical operation they need.

The surgeon, Mr Bello, said there are lots of misconceptions around cleft cases that have prevented people from accessing treatment.

He said children from three months old are eligible to undergo surgical treatment but some parents hide their kids for longer years due to fear of stigmatisation.

“I once performed cleft surgery on a 70 years old man. That is to tell you people stay too long before seeking treatment,” he said.

The surgeon’s claim is supported by some mothers who narrated their struggles from having a child with a cleft.

Ms Egbe said she had made several attempts to access treatment but the high cost discouraged her.

She said her lack of money was the major reason for preventing her daughter from undergoing the required operation at an earlier age.

“At a time, we took her to the health facility but the money they requested was too much for her father to pay so we decided to wait for a miracle,” she said.

Meanwhile, luck shone on Sharon a few days after her parents decided to enrol her in a nearby school.

“A journalist like you, saw Sharon’s lips and told us we can access a free surgical operation in Abuja and that was how we got here today,” Ms Egbe said.

The free surgical operation which Sharon benefited from was sponsored by Smile Train.

Like Sharon, 10 years old Roselyn is also a beneficiary of the surgical intervention.

Roselyn’s mother, Mary Shehu, a trader residing in Mararaba in Nasarawa State, recalled an incident during her daughter’s birth.

She said when the traditional birth attendant handed her Roselyn for the first time, at about 8 a.m. on 28 May 2012, she instantly noticed an opening on the newborn’s lip.

The discovery, she added, coincided with an unusual attitude from the TBA.

She recalled the TBA and her neighbour explaining their superstitious beliefs about the evil she must have done to cause her baby’s condition.

“I cried so much because it is something I never expected to happen to me. I didn’t know anything about what this meant,” she said.

Ms Shehu’s pain of having a child born with a cleft lip worsened when her mother-in-law began shouting and hurling curses at her for giving birth to a child with deformity.

“No child has been born with any of such diseases in our family line, this is all your fault,” Ms Shehu quoted her mother-in-law as saying when she narrated her story to PREMIUM TIMES.

From that moment, she said, she began to be ashamed of herself and her baby. She would always cover the child’s face whenever someone visited their home.

“When I need to go out, I leave Roselyn at home to avoid unnecessary stares from passersby,” she said.

Ms Shehu said she never knew about the treatment options available for cleft. “I didn’t know it was treatable, I just accepted it as my fate,” she said.

All of these happened in Lafia, the Nasarawa State capital where Ms Shehu’s family resided before their eventual relocation to Mararaba, a move she attributed to too many misconceptions about her child’s condition.

Following her relocation, she was advised by a friend to take Roselyn to the hospital for a reconstruction surgical operation, a decision she said changed her daughter’s life.

Like Ms Egbe, Karen Joseph, a civil servant whose son had a cleft palate, said she concealed the identity of her baby since birth due to fear of stigmatisation.

Ms Joseph said she failed to carry out the usual naming ceremony after seven days of birth to prevent people from noticing the abnormality with her child.

She said few persons who visited her home after the baby’s arrival questioned her involvement in the child’s health status.

“Are you sure nobody has this in your family? I think there is something you are not telling us,” she quoted some relatives as saying.

These judgemental reactions from close relations heightened her decision to hide her child to protect him from bullying and stigmatisation.

“I presented my son for a surgical procedure when he was seven months old, I am grateful to God for his healing,” she said.

Before the arrival of Smile Train in Nigeria, many people were living with untreated clefts due to the cost of surgery, while others were unaware that it is a treatable condition.

Victoria Awazie, the Senior Programme Manager West Africa for Smile Train, said about 33,000 cleft patients have been treated in Nigeria since 2007.

Ms Awazie said the organisation has a presence in over 90 countries around the world with 43 in the African region. The organisation partners with hospitals in different states and countries to offer free treatment for both adults and children born with cleft lip and palate.

“We also offer physio-socio support to patients and caregivers who most times have suffered stigmatisation from family and the society,” she said.

Ms Awazie said the awareness level of cleft generally is poor, especially in rural communities. She said the situation is worse in the northern part of Nigeria where most cases of cleft are recorded.

She said the majority of persons are unaware cleft is a treatable deformity.

She explained that some mothers of cleft patients have been thrown out of their matrimonial homes due to ignorance. These issues and many others prompted Smile Train to carry out various programmes to create awareness through its partners in different states.

“Sometimes, we go to the marketplace, religious centres, and community influencers to enlighten people on cleft and debunk misconceptions about the condition.

“We also let them know cleft is a treatable deformity because there are lots of stigmatisation on children born with cleft,” she said.

The oral and maxillofacial surgeon, Mr Adekunle, said ignorance on cleft is a big challenge that must be tackled.

“From our experience, we have encountered children and adults who do not know that treatment was available for cleft,” he said.

He said that is the reason some persons did not access treatment until adulthood.

Ms Awazie also said some children miss out on treatment because they were not born in a health facility.

“When a child with cleft is born in a proper health facility, the health workers will take necessary action and advise the mother of steps in accessing treatment,” she said.