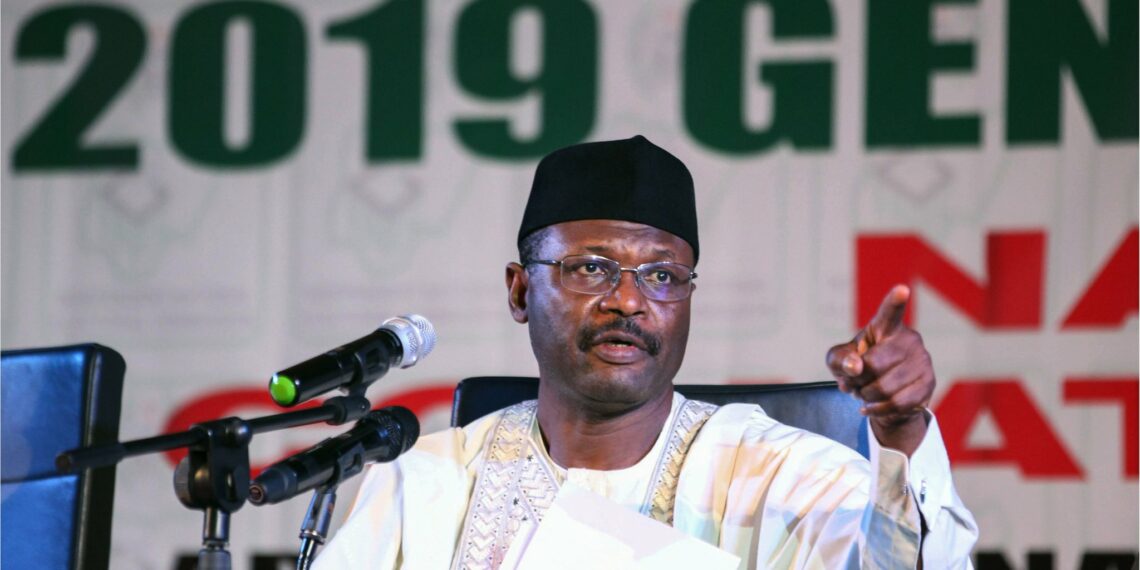 "There are 18 political parties in the race to produce the next president to be elected by 95 million voters. We had over 84 million registered voters in 2019."

INEC Chairman, Mahmood Yakubu, disclosed this at a function organised by the National Endowment for Democracy (NED) and the International Foundation for Electoral Systems (IFES) in Washington DC, U.S.

Mr Yakubu said this in a keynote address titled “Nigeria 2023: Ensuring credible, peaceful and inclusive elections”, made available to the News Agency of Nigeria (NAN) in Abuja on Thursday.

He described the 2023 general elections as significant to Nigeria.

“The election is significant because the incumbent president is not eligible to run, this being his second and final term.

“There are 18 political parties in the race to produce the next president to be elected by 95 million voters. We had over 84 million registered voters in 2019.

“But with last Continuous Voter Registration (CVR), we are going to add at least 10 million Nigerians and that will take the Register of Voters to 95 million,” Mr Yakubu said.

He said the election was significant as 95 million Nigerians were expected to vote in 176, 846 polling units.

“Each time Nigeria goes to the poll, it is like the whole of West Africa voting.

“In West Africa, there are 15 countries including Nigeria. But the total number of registered voters in the 14 countries combined is 73 million.

“In Nigeria, it’s going to be 95 million. So, there will be 22 million more voters in Nigeria than the whole of West Africa put together,” Mr Yakubu said.

He added that a lot of innovations have been introduced to increase transparency and ensure the credibility of the country’s electoral process.

“The new Electoral Act with its many progressive provisions has provided legal backing to the innovations.

“These innovations are now provided for and protected by law, especially those leveraging on technology to improve voter registration, voter accreditation, result management and the promotion of inclusivity for marginalised persons such as women, youths and persons with disability,” he said.

Mr Yakubu said the introduction of online voter registration was part of the innovations, saying it was very helpful during the COVID-19 pandemic.

He said the online registration was done alongside physical registration from June 2021 to June 2022 when that option lasted and 12, 298, 944 voters completed their registration.

“This is more than the entire voter population in the Republic of Gambia, Guinea-Bissau, Liberia, Sierra Leone and Cape Verde. We are such a huge country of great potential,” he said.

Mr Yakubu said that INEC has completed the cleaning up of the data of newly registered voters using the Automated Biometric Identification System (ABIS) that combine the fingerprint and facial authentication of registered voters.

He said those who registered twice and those who were underage or have no reason to register as provided by law have been weeded out.

“The exercise was completed a few days ago. We have not even shared the information with Nigerians, but we have 2.7 million invalid registrants and they have been weeded out.

“We will continue to take steps necessary to protect the integrity of the Register of Voters because it is fundamental to the conduct of elections. There can’t be credible elections without a credible register of voters,” he said.

Mr Yakubu said that Permanent Voters’ Cards (PVC) would be available for new registrants by November.

“We are looking at early to the middle of the month to make the cards available.

“We have already printed over 50 per cent of the cards but we haven’t delivered them to the states yet.

“As we clean the data, we also print the cards. Nigerians who have registered should be rest assured that they will have their cards ahead of the general election.

“We also need to do so in good time because the law now requires us to publish the number of cards collected per polling unit,” he said.

Mr Yakubu added that INEC also introduced other portals for things like accreditation of observers, media organisations, nomination of candidates by political parties and nomination of polling agents by parties.

He said the innovations have also been helpful in reducing the level of litigation arising from the conduct of political parties.

“This is because now it’s an interaction between the party agents and the machines and anytime you logged in and out, there is a time stamp, so you can’t argue.

“If you argue, we’ll produce the evidence of what happened. And at 6 p.m. on a fixed date, the portal automatically shuts down. If any party has any problem, it’s not the Commission,” he said.

On BVAS innovation, Mr Yakubu said the use of the technology in Nigeria’s electoral system has come to stay and there was no going back.

He said the technology had helped to eliminate multiple accreditations that were observed in previous elections, increased public confidence in the outcome of elections and eliminated the use of the Incident Form.

“Another innovation that we introduced is the INEC Result Viewing (IReV) portal. We are perhaps one of the few countries in the world that transmits polling unit-level results in real time on election day.

“Proudly, I can say we are the first to introduce it in Africa,” he said.

Mr Yakubu said that IReV has increased transparency in result management and helped to eliminate the falsification of results from the polling unit level to the collation centres.

“We have deployed the IReV in 105 off-cycle and bye-elections.

“We believe that the system is robust and we are taking additional measures to safeguard and fortify our web resources generally against threats of attack,” he said.

On inclusivity, Mr Yakubu said INEC has created a new Department for Gender and Inclusivity in the commission.

He added that within the limits of available resources, INEC has also provided assistive devices for Persons with Disabilities, such as a braille ballot guide and magnifying glasses for the visually impaired and those living with Albinism.

Mr Yakubu said going into the 2023 general election, the first concern was the insecurity in different parts of the country, compounded by thuggery during elections organised by some of the political actors.

“Elections are conducted by human beings. We worry about the security of our officials, voters and the materials to be deployed.

“Without them, we cannot conduct elections. We have spoken to the security agencies; they have assured us that the situation will improve before the elections. So, fingers crossed.

He added that INEC was concerned about the issue of fake news, but as a commission did not support censorship, saying that it was deepening transparency and harmonising available opportunities to address fake news which has an impact on elections.

“But it also has the potential of skewing the narrative with the wrong information that impugns the integrity of officials or seeks to delegitimise the commission and the process before, during or after the elections.

“Publication of fake election results is a potential trigger for violence. What we have done is to continue to deepen our cooperation and relationship, particularly with the organised social media,” Mr Yakubu said.