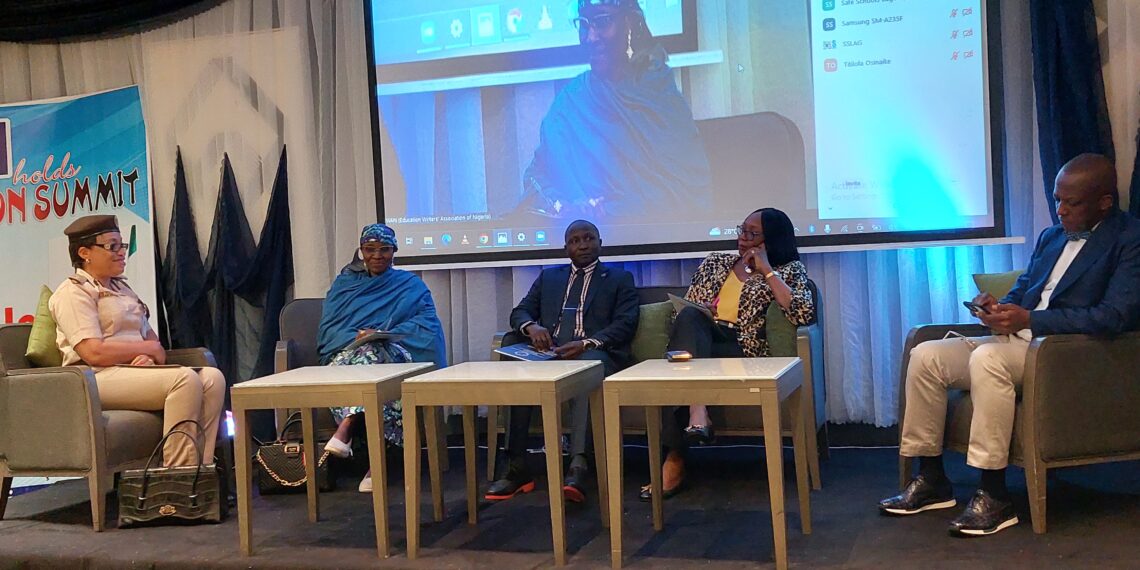 The panellists at the 2022 EWAN's education summit

“It is not fair on the countries, we should interrogate, let's start questioning these data from international organisations,” an official said.

Some government officials have questioned the latest global data on out-of-school children by the United Nations Educational, Scientific and Cultural Organisation (UNESCO).

Officials of the federal and Lagos education ministries expressed the doubt at an event on Wednesday.

UNESCO in September announced that Nigeria now has about 20 million out-of-school children. It noted that there were 244 million children and youth between the ages of 6 and 18 who are out of school globally.

According to the statistics, India, Nigeria and Pakistan have the highest figures for out-of-school children globally.

The government officials who spoke as panellists at the annual education summit organised by the Education Writers’ Association of Nigeria (EWAN) emphasised the need for an independent and accurate data collation system in the country rather than “depending on data from international agencies.”

The summit was tagged “Towards safe schools in Nigeria.”

Participants at the summit also discussed the violent attacks on schools by criminals and other forms of violent incidents in schools.

The Director of Senior Secondary Education, Federal Ministry of Education, Binta Abdulkadir, said the UNESCO figure is inaccurate because the federal government has been able to reduce the number of out-of-school children through the Better Education Service Delivery for All (BESDA).

“The federal government has taken a number of steps that have greatly reduced the figure in recent times. BESDA is one of the steps and through it, we have got over four million children back to school in no fewer than 17 states of the federation,” she said.

BESDA is an intervention programme funded by the World Bank with the aim to increase equitable access for out-of-school children, improve literacy and strengthen accountability for results at the basic education level.

The Basic Education Commission had earlier stated that 17 states of the federation as of July 2022, received over N65 billion as intervention funds to combat the rising figure of out-of-school children between 2019 and 2021.

The states include all 13 states in the North-west and North-east geo-political zones, as well as Niger, Oyo, Ebonyi and Rivers states.

As of November 2021, the Federal Ministry of Education noted that about 924,590 of the previous figure of 10.2 million out-of-school children in Nigeria had been enrolled on the BESDA programme.

On his part, the Special Adviser to the Lagos State Governor on Education, Tokunbo Wahab, also expressed doubt about the UNESCO figure. He urged reporters to query some of the data from international agencies before using them.

“It is not fair on the countries, we should interrogate, let’s start questioning these data from international organisations,” he said.

However, despite the claims of the officials and the actions of the government, many schools in the North-west and North-central remain closed or partially open due to fear of attacks by terrorists.

PREMIUM TIMES has reported attacks on schools in states such as Kebbi, Niger, Zamfara and Kaduna. In many such cases, students and officials are kidnapped for ransom by terrorists.

Giving his keynote speech, the Minister of Education, Adamu Adamu, represented by the Director of General Services, Federal Ministry of Education (FME), Vivian Wategire, noted that the attacks on schools are not limited to Nigeria.

He acknowledged that “the security situation in the country has had a domino effect on the literacy level of Nigerians as insurgency also destroyed 497 classrooms and left 2.8 million school learners in need of education-in-emergency support.”

It has also aggravated “the already challenging out-of-school menace plaguing Nigeria,” he said.

“Despite this situation, we are not deterred in our commitment to creating a good environment for education, which would increase literacy levels in the country. Our actions and policies towards safe schools show the federal government’s commitment to the present and the future of this country.

“As the apex body in charge of education in the country, we are essentially committed to developing and increasing literacy which fits into the larger spectrum of the Federal Government’s commitment/responsibility to the children, youths and the whole country,” he noted.

They also launched the Safe Schools Fund as an initial response, with capitalization from the federal government and the private sector, and indicative grants from the African Development Bank.

He added that the National Council on Education in August 2021, approved the National Policy of Safety and Violence-Free Schools in Nigeria and its implementation guidelines as reference documents for all education stakeholders.

He called for more collaboration between the government and the people “to actualize the possibility and reality of safe schools in Nigeria against all odds.”

Speaking on universal access to health, the newly appointed first female Vice Chancellor of the University of Lagos (UNILAG), Folasade Ogunsola, recommended that students should be covered under the National Health Insurance Scheme.

“I think it is mandatory that all students, whether primary, secondary or tertiary, are on the National Health Insurance Scheme.

She also said the psychological health of students is as important as physical health, as more students are battling depression as a result of bullying, sexual harassment and other social vices.

She recommended the need for the formulation and implementation of policies across all institutions to deal with such social vices and ensure that everyone knows about the policy.

Citing UNILAG as an example, she noted the institution as a result of some cases of sexual harassment a few years back, “had the sexual harassment policy, bullying, anti-bullying policy, which we adopted together as a safeguarding policy.”

She said new employees in the school are made to read and sign the policy, and students are trained to know that these policies exist.

She also recommended that schools should be renovated to accommodate people with disabilities, stressing the need for adequate funding.

In his opening address, the chairman of EWAN, Mojeed Alabi, said “Nigeria is sitting on a keg of gunpowder” if it does not address the security of schools.

“The assignment before us is to ensure that there is security at every level. If we do not address the security of schools in Nigeria, we can never address other problems confronting the nation, ranging from economy to unemployment,” he said.

He added that “safety of schools is not limited to violent attacks only, and that is why we are having this discussion to proffer solutions that will be domesticated even right from the top to the various homes.”

He also reiterated the association’s responsibility as the “fourth estate of the realm” to drive advocacy and partnerships for change at all levels of education.

“It is beyond reporting. We have reported and listened. It is now left for us to engage in advocacy to partner with everybody – from the university, basic education, and middle education, and we are telling you that this commitment is very important for all of us. We are ready to mobilise everybody,” he added.

In his remarks, the Lagos education official, Mr Wahab, commended EWAN for demonstrating a “high sense of professional responsibility as the watchdog of the society.”

You have equally expressed your organisation’s readiness through advocacy programmes like this to join the state government’s efforts to ensure safety and improved security system in schools, he said.

Speaking further, Mr Wahab, who admitted that the security situation in the country is “worrisome,” highlighted the Lagos State government’s commitment to achieving quality education which is the “third pillar” of the administration’s development agenda.

“This is not by accident; rather, it underscores the state government’s genuine commitment to achieving quality and sustainable educational growth through policy formulation and implementation,” he said.

As part of the measures to scale up security in public schools and institutions, he said the current administration has taken a lot of initiatives including the provision of perimeter fencing in all public schools, banning the use of public schools for social parties and sensitisation programmes on the danger of drugs, cultism and violence in schools.

He added that the state has installed street lights in schools, as well as rewards of excellence in academic programmes in schools and institutions, among others.

He, however, urged the government at all levels to “formulate and implement policies that would help us to rise up to the challenges posed by insecurity in our schools.”

“This in turn would help us to achieve peace and harmony in our schools and colleges while our school calendars and programmes would run as planned, thus making our educational system gain global relevance,” he said.

The Deputy Director of Lagos State Safety Commission (LSCC), Ajose Olatunde, also noted that the Lagos State government has been “passionate about safety in schools.”

Mr Olatunde said the LSCC has initiated safety programmes for the 2000 schools in the state.

The panellists advocated for the provision of close-circuit Television (CCTV) cameras to help monitor and ensure adequate security of lives and properties in schools.

“They are doing everything humanly possible to see that each and every school secondary school in Nigeria is provided with these facilities. So that we can have minimised of this insecurity in our schools,” she said.

Also, the Commandant-General of the Nigeria Security and Civil Defence Corps (NSCDC), Ahmad Audi, represented by the Lagos Commandant, Edenabu Emeka, said they have recommended the deployment of CCTV cameras for schools.

He said the agency has been charged to ensure safety in schools “in conjunction with playing an advocacy role not only to the school but to the ministry governments, traditional institutions, women associations as well as other relevant stakeholders”