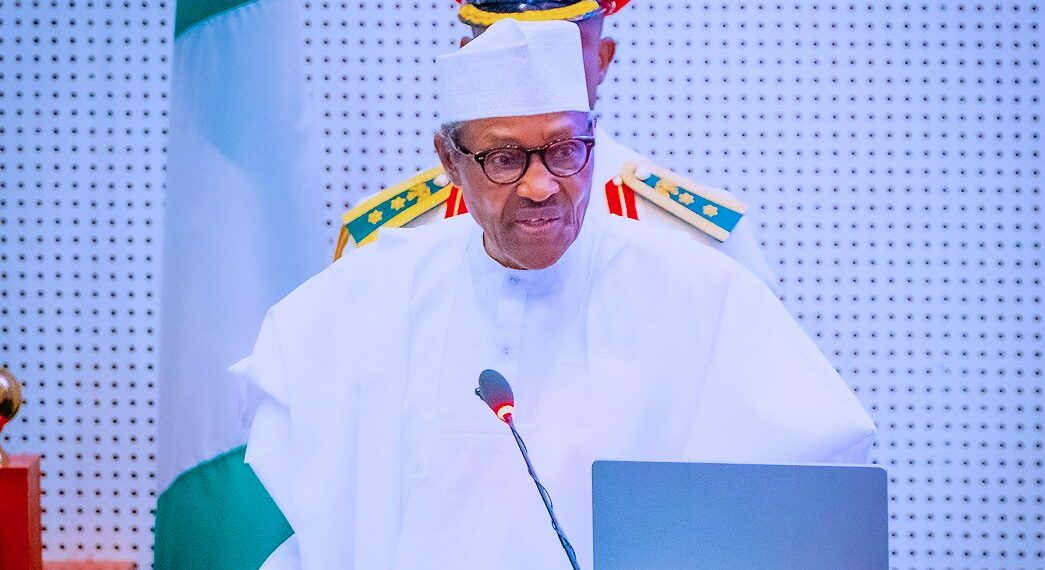 President Muhammadu Buhari’s apparent mismanagement of Nigeria’s diversity has fueled distrust, further polarised the country and made more citizens lose hope in the country, a new survey has found.

The causes of polarization are “ethnicity (62 per cent), political affiliation (60 per cent), and religion (57 per cent),” according to the survey.

In the 2021 data, 4 in 10 Nigerians said they were proud of being equally Nigerian and from their ethnic group, while about a third (33 per cent) said they identified more with their ethnicity than with being Nigerian, compared to only 9 per cent that felt more Nigerian than ethnic.

But, this also means the proportion of citizens who believe that the country is much more divided today than it was 4 years ago increased slightly by one percentage point from 65 per cent in 2021 to 66 per cent in 2022.

On trust, religious leaders were rated more favourably (50 per cent), followed by traditional leaders (43 per cent).

“Trust for President Buhari’s government has substantially declined to 17 per cent from 26 per cent in 2021,” the survey found.

About 60 per cent of citizens believe that the future of the country would be better than it is presently; compared to 27 per cent who expressed pessimism that the future would be worse; and 6 per cent simply do not foresee any change in the future.

In the past year, 59 per cent of Nigerians believed the country would have a better future while 27 per cent said the future of Nigeria would be worse.

The 2022 Nigeria Social Cohesion Survey (NSCI), a publication of Africa Polling Institute (API), was undertaken to develop a social cohesion index for Nigeria and measure citizens’ perception of the state of social cohesion, API’s executive director, Bell Ihua, said in a statement.

This year’s survey builds on two past editions (2019 and 2021) of API’s Nigeria’s social cohesion index. 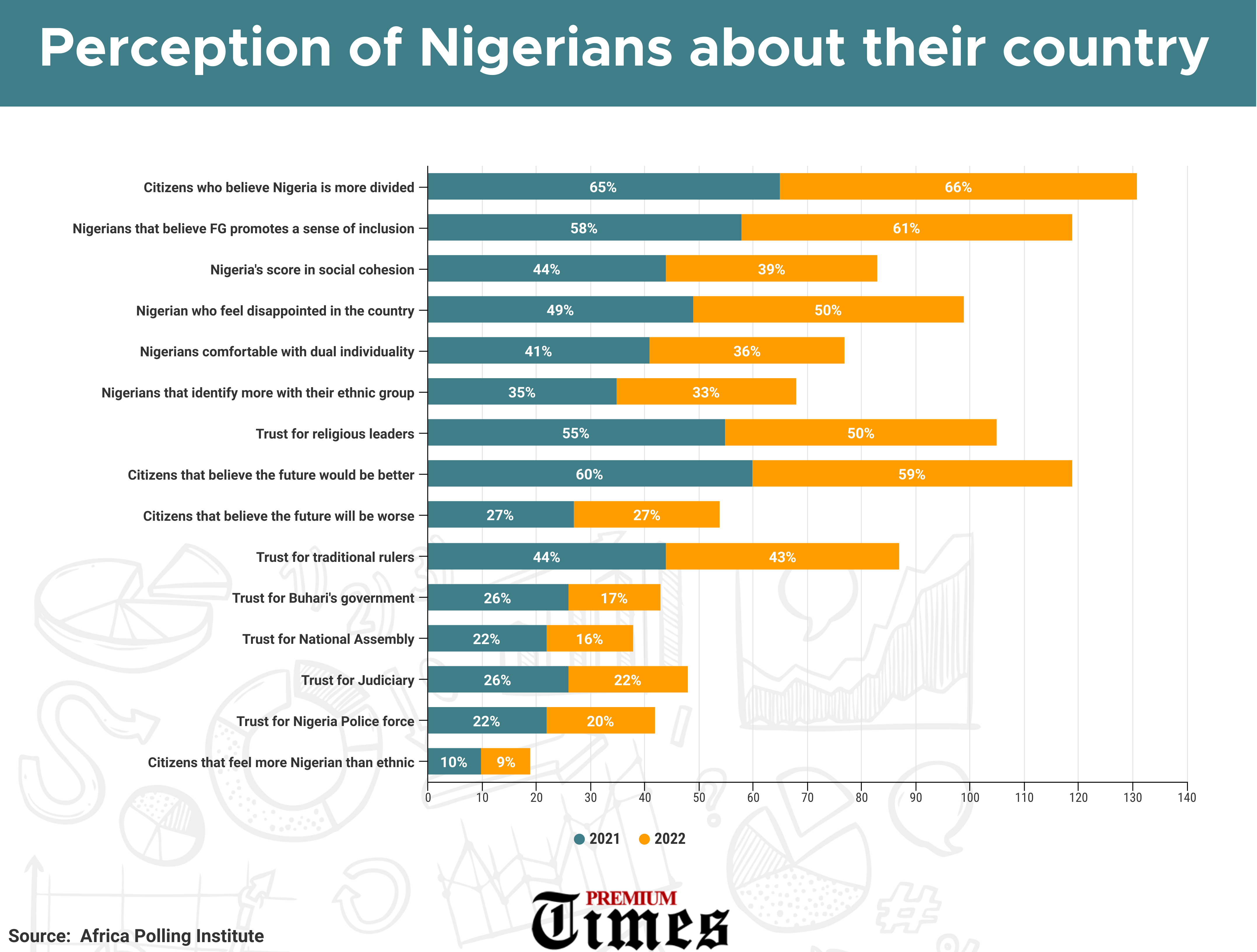 “The concept of social cohesion refers to the willingness of citizens of a country to cooperate and work together towards ensuring the survival and prosperity of the country,” Mr Ihua, a professor of practice in opinion research, wrote.

API said this indicates a weakening of the state of cohesion in the country over the last year.

Conducted between the months of May and June 2022, the study adopted a mix of quantitative and qualitative methods, with the Citizens Perception Survey (CPS) and Key Informant Interviews (KIIs) adopted for primary data collection.

A total of 7,245 people were contacted, out of which 5,178 interviews were completed, representing a response rate of 71.5 per cent. All interviews were conducted by Face-to-face Household Interviews, using the Stratified Random Sampling technique; with citizens aged 18 years and above, API said.

“The interviews were conducted in five major languages: English, Pidgin, Hausa, Igbo and Yoruba; and geographic quotas were assigned to ensure that all Senatorial District and States were proportionately represented in the sample.”

Drawing from the literature, and building upon the 2019 and 2021 survey round, this current edition captures attitudes and perceptions of citizens using 13 key indicators to measure social cohesion in Nigeria,

“This is a product of world best practices in methodological design, whose reliability or internal consistency was tested with Cronbach’s Alpha Value which equals 0.510, because values less than that are usually not acceptable,” said Ifeanyi Onwuzuruigbo of the University of Ibadan, and Hauwa Yusuf of Kaduna State University, who were involved in the survey.

The report also showed that the proportion of Nigerians who feel disappointed in the country has increased from 49 per cent in 2021 to 50 per cent in 2022.

Also, 61 per cent of Nigerians said the federal government is not making enough effort to promote a sense of inclusion for all ethnic groups, an increase from the 58 per cent of citizens who held the same belief last year. 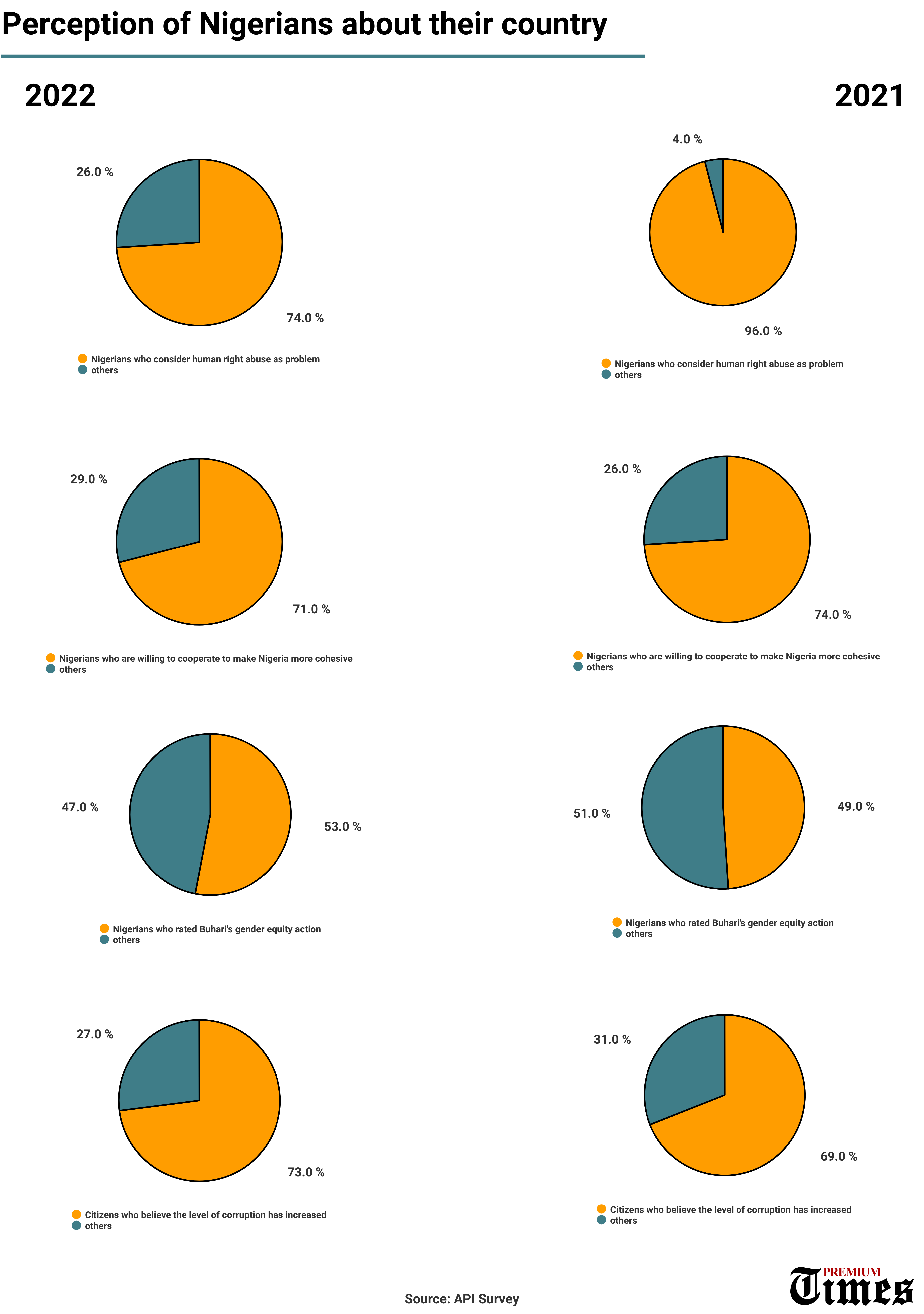 Only 12 per cent assessed the government positively on social justice; compared to the 27 per cent who assessed them fairly. About 67 per cent said the law does not apply equally to citizens.

“Majority of Nigerians (96 per cent) consider human rights abuses and violations a problem in the country; while 44 per cent believe that such many cases of human rights violations are never reported to the Police.”

“Interestingly, 60 per cent of citizens are “very or somewhat likely” to report such cases to community and religious leaders as opposed to the Police (56 per cent),” the report added.

On participation and patriotism, 71 per cent of Nigerians are willing to cooperate with fellow citizens to make Nigeria more socially cohesive, whereas “42 per cent expressed willingness to join the military to defend the Nigerian state.”

“Herein lies a major promise to savour in the report and a great hope for remaking Nigeria,” wrote Omoniyi Ibietan, the Head of Media Relations Management at the Nigerian Communications Commission (NCC).

Study findings on corruption governance reveal that 75 per cent believe the level of corruption has increased in the past year while 76 per cent of citizens perceive the government’s effort at halting corruption as “poor”, and 87 per cent are of the view that the path to justice is paved with corruption.

As regards peacebuilding, 67 per cent rate the government poorly and 58 per cent believe peacebuilding can be achieved better through local efforts.

While the government is rated as inactive in peacebuilding, however, churches and mosques, as well as civil society organisations, are rated highly in helping citizens to cope with the challenges of poor social cohesiveness.

On self-worth, “63 per cent of Nigerians say they feel ‘extremely or somewhat dissatisfied’ about their lives as Nigerians, and top destinations for those with a tendency to emigrate are the United States (28 per cent), United Kingdom (15 per cent), Canada (14 per cent), Saudi Arabia (9 per cent), and Dubai (8 per cent)”.

API urged the federal government to strengthen existing policies, legislation and institutions that help to create a sense of belonging, promote trust, foster good governance and provide a conducive atmosphere for citizens to thrive and fulfil their life aspirations.

It recommends that Nigeria’s legislation and policies on citizenship should be rejigged to encourage social and inclusive citizenship that de-emphasize indigeneity and discourage the exclusion of citizens based on indigeneity.

Unemployment and poverty alleviation programmes like the Nigerian Social Investment Programme (NSIP) and NAPEP should be revived and strengthened to tackle the problems of poverty, unemployment and underemployment, API advised.

In addition, the federal government should adopt a hybrid of conventional and unconventional peacebuilding initiatives as the main thrust of its conflict management strategies.

“It has been established that Nigerians trust traditional and religious leaders more than public officials and institutions,” API said in the statement signed by Mr Ihua. “To absolve the problem of trust deficit, traditional and religious leaders should intensify efforts to mitigate against local conflicts, discrimination and hate speech since they are closer to the people and earn more trust of the people than the government.”

“CSOs can also play a huge role in helping to rekindle public trust for civil authorities. While there’s evidence to suggest that effective implementation of programmes and policies that improve the livelihood and well-being of citizens can help to rebuild trust; CSOs can guide government towards focusing on policies, programmes and projects that would have more impact on the lives of citizens, especially at the grass-root levels,” the group said.

It advised citizens to engage their leaders and other critical stakeholders in dialogue and ensure they render an account of their stewardship.

“In doing so, emphasis should focus on contributions to social cohesion and building a strong and prosperous Nigeria.

“Citizens should discourage statements and actions that can impede the peace and unity of the country, and avert conflicts, chaos and civil unrest; especially as the country gears up for the next General Elections. Also, the trend of destroying and vandalising public properties needs to stop.”

“Finally, while Nigerians remain resilient and committed to working together for a better country; we reiterate the need for a national dialogue to help renegotiate the fault lines that currently threaten our shared existence as a nation,” API said.