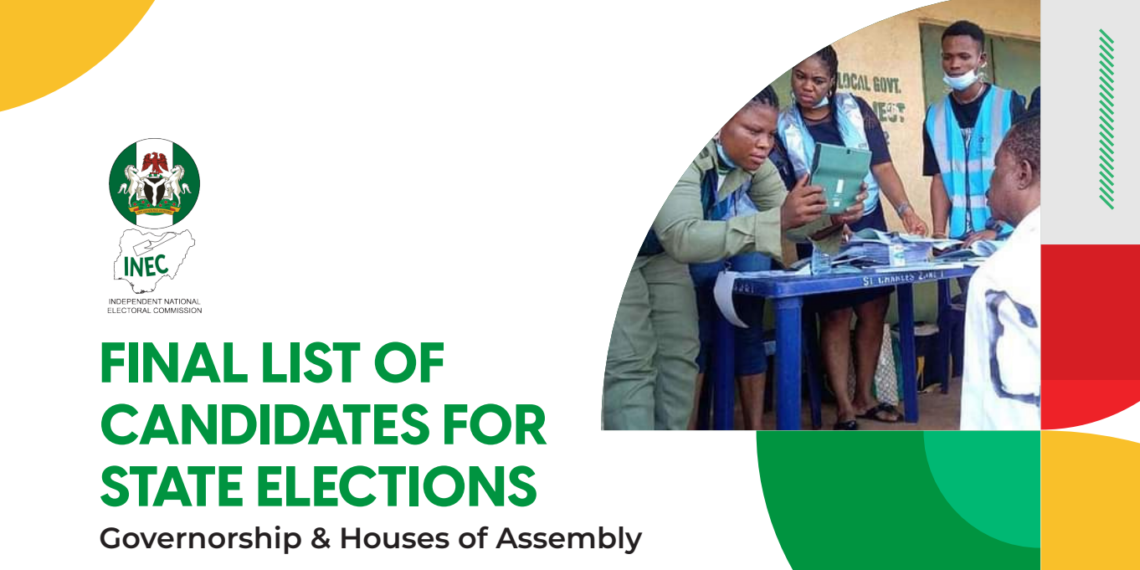 The APC and PDP are still maintaining their dominance on the political scene as they produced candidates in almost all the states where elections will hold.

At least nine of the 18 recognised political parties are ‘poorly’ represented on the final list of candidates nominated by parties for the 2023 governorship and state assemblies elections.

While some of the parties did not nominate candidates in some states for the governorship election, others have no candidates in the constituencies for the election into the state houses of assembly.

The Independent National Electoral Commission (INEC) has scheduled the state elections for March 11.

According to the list of candidates released by the Commission on Wednesday evening, 837 candidates drawn from all the parties would be jostling for the governorship seats of 28 states of the federation.

It also said 10,231 candidates would contest for 993 seats in the 36 state houses of assembly.

INEC’s lists show that ithe ruling party, All Progressives Congress (APC) and the the main opposition, Peoples Democratic Party (PDP) are still maintaining their dominance of the political scene as they produced candidates in almost all the states where elections will be conducted.

Except in Ogun State where party members are engaged in a legal tussle over who flies its flag in the state, the PDP is fielding candidates in all the states in the governorship election.

Also, apart from Akwa Ibom State where the candidacy of Akanimo Udofia for the APC Akwa-Ibom was rejected due to the internal crisis rocking the state chapter, the APC is presenting candidates for all the governorship seats in states where elections are holding.

INEC did not monitor the primary that produced Mr Udofia.

The lists indicate that nine of the parties are not fielding candidates for some of the elections despite the growing popularity of their presidential candidates.

The LP has no candidate in Ogun State just as it also risks losing a chance in Taraba if the legal tussle among its governorship aspirants is not resolved before the election.

In the same vein, NNPP has no governorship candidates in Borno, Cross River, Kebbi, and Zamfara states.

The African Action Congress (AAC), which has popular activist and publisher of Sahara Reporters, Omoyele Sowore, as its presidential candidate, is not fielding governorship candidates in 13 out of the 28 states, INEC list shows.

After picking Haruna Magashi, a Kano indigene as vice-presidential candidate for the coming election, Mr Sowore had vowed to defeat the NNPP, APC and PDP in the state but the final list portends a new reality.

The party may not be able to “take power back” with its extremely low state assembly candidates.

Parties like Accord, All Progressives Grand Alliance (APGA), Boot Party (BP), and Zenith Labour Party (ZLP) were also not adequately represented on the final list released by INEC.

Accord has no governorship candidates in 13 states while APGA and ZLP have none in nine states. On its part, BP is not fielding candidates in 16 states.

The Young Progressive Party (YPP) will not participate in the Bauchi, Borno, Gombe, Katsina, Nasarawa and Ogun governorship elections.