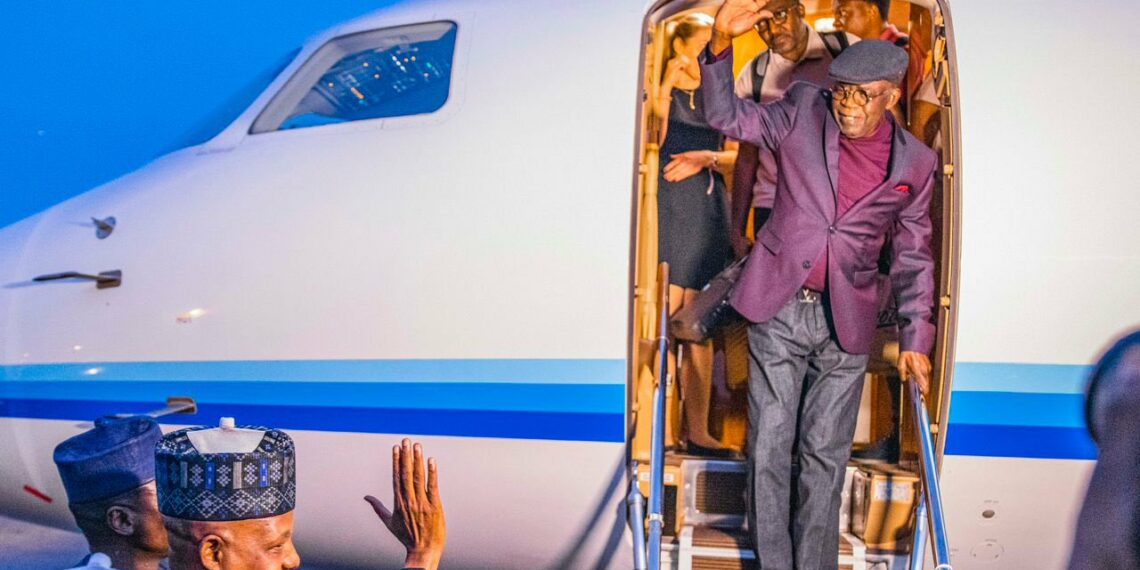 The presidential candidate of the All Progressives Congress (APC), Bola Tinubu, has returned to Nigeria over a week after he travelled to the UK.

The Director General of the APC campaign council, Simon Lalong and former National Chairman of the APC, Adams Oshiomhole, were some of the party faithful that received him at the airport.

There have been rumours that the candidate was holed up sick in London and would not return soon to commence campaigns for next year’s election. His campaign has, however, denied the reports.

His team claimed that he travelled to the UK to get some rest before the full commencement of campaign activities.

The APC has had to postpone the flag-off of its campaign due to Mr Tinubu’s absence.

In the last few days, his handlers released several images and ‘workout video’, as opposition demand his whereabouts. The #WhereIsTinubu trended on Twitter for days.

Mr Tinubu also missed the peace accord signing by the presidential candidates of all the political parties ahead of the 2023 general election. His running mate, Kashim Shettima represented him at the event, which held last week.

In his absence, his party is currently dealing with infighting over the composition of the Presidential Campaign Council (PCC).

PREMIUM TIMES had reported how the governors of the APC threatened to sabotage the campaign in protest over the PCC composition, prompting the postponement of its inauguration.

Mr Lalong and the Chairman of the Progressives Governors Forum, Abubakar Bagudu, are reportedly working on expanding the list to address the concerns of all aggrieved members of the party.

On Wednesday, some governors of the party had a marathon meeting with the National Working Committee (NWC) of the party over the composition of the council.

The National Chairman of the APC, Abdullahi Adamu, led the NWC members to the meeting.

Mr Adamu had allegedly wrote a letter to Mr Tinubu expressing dissatisfaction of the NWC with the composition of the PCC. The party however denied that its chairman wrote the letter.

With Mr Tinubu’s arrival, the party is expected to flag off its campaigns in Ilorin, the Kwara State capital, baring last minute change of mind.