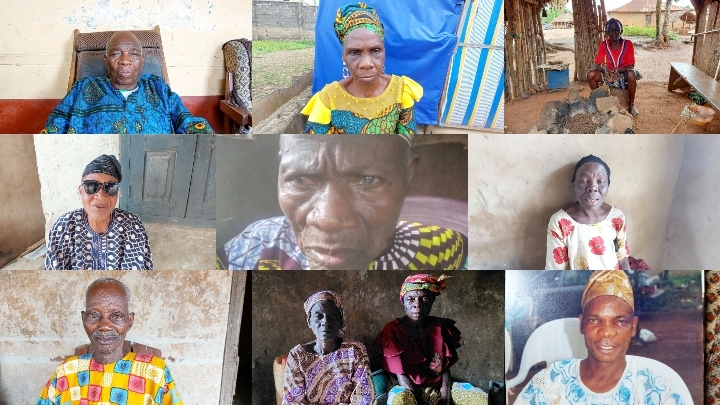 The Pension Reform Act 2014 provides that pensions should be increased after every five years or whenever there is an increase in the salaries of active workers.

(This is the second of a three-part series. Read the first part here).

Essentially, the national policy on ageing is premised on the Nigerian constitution which guarantees the rights of everyone in Nigeria. The National Senior Citizens Centre Act is to implement Section 16 of the Constitution and mandates the state to direct its policy towards ensuring “that old age care and pensions, and unemployment, sick benefits and welfare of the disabled are provided for all citizens.”

The policy also applies regional and international instruments ratified by Nigeria, such as the AU Agenda 2063 and the UN International Plan of Action on Ageing.

Nigeria’s pension scheme started in 1951 when the colonial British administration established a scheme through an instrument called Pension Ordinance.

Before the enactment of the Pension Reform Act 2004, which established a Contributory Pension Scheme (CPS) for all employees in Nigeria, the country had operated a Defined Benefit (DB) pension scheme, which was largely unfunded and non-contributory.

The scheme led to a massive accumulation of pension debt and became unsustainable. The CPS, under the Pension Commission (Pencom), has, however, also underperformed.

The PRA 2014 provides that pension should be increased after every five years or whenever there is an increase in the salaries of active workers in line with the provisions of Section 173 of the 1999 Constitution (as Amended).

The Chairman of the Nigerian Union of Pensioners, South-west zone, Waheed Oloyede, said gratuity was last paid in Ogun State in June 2014 and to primary school teachers in December 2012.

He added that the monthly pension is also not regular and the government last increased the pension 15 years ago.

“The government should review and increase the pension payment of those receiving less, in line with the constitution. Imagine someone receiving N5ooo for 30 days, it is humiliating,” he said.

The chairman who retired 25 years ago from the Ogun State Civil Service Commission also expressed concern that the N500 million quarterly allocation for the payment of gratuity that started in 2020 would not be able to clear the backlog of unpaid gratuities put at N68 billion as of August 2022 for both local government and state retirees.

Inadequacy in the pension system

Nigeria ranked low at 64th position in the Allianz Global Pension Report 2020, “especially because of the insufficient adequacy of its pension system”, adding that no African country ranked among the top 10. South Africa ranked 41st, followed by Kenya and Morocco at 55th and 60th respectively.

It added that over the next decades, the number of people of retirement age would increase markedly and put social security systems under severe stress. 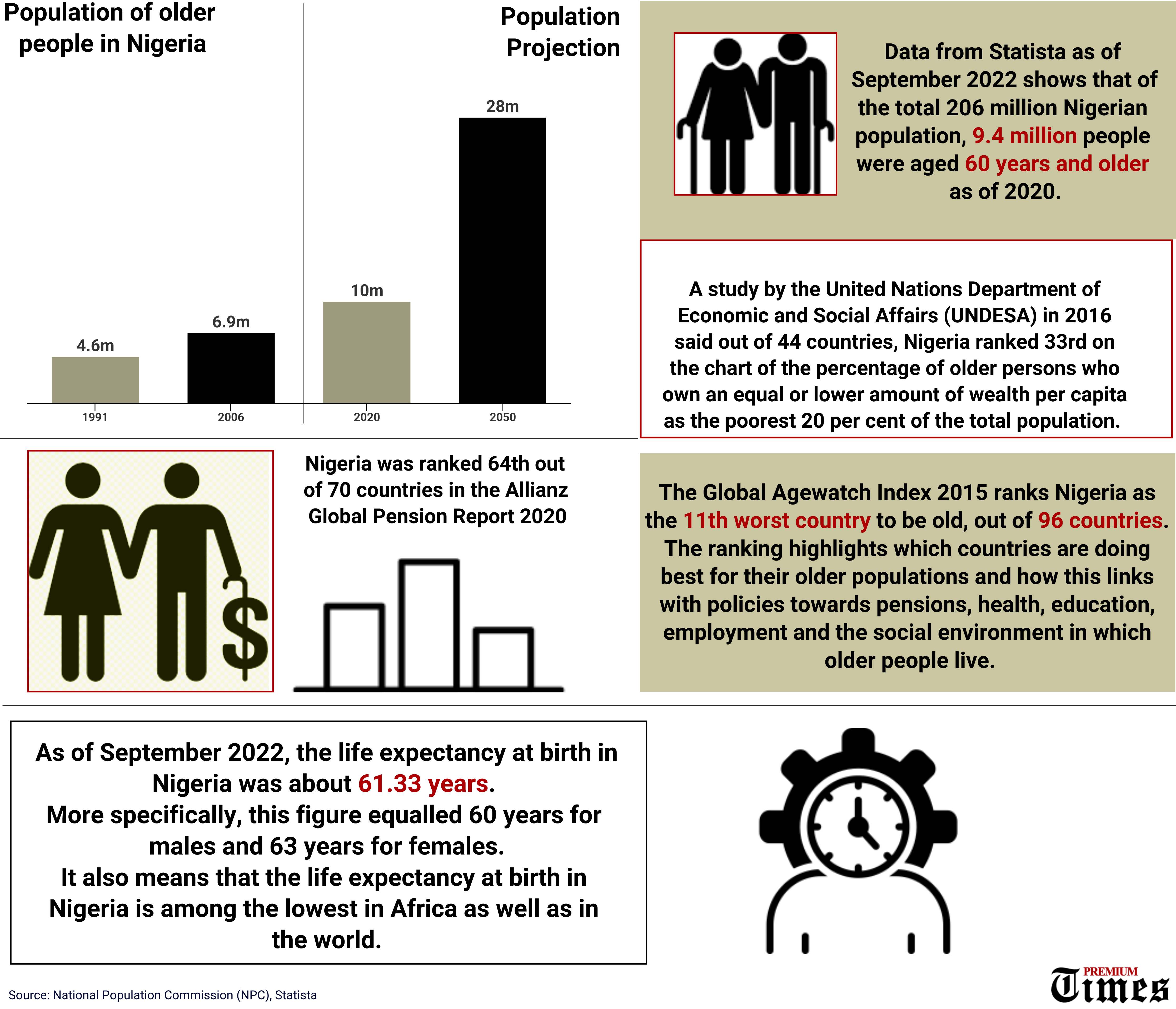 The blind not spared

In Igbogila at Sawonjo, Yewa North Local Government Area of Ogun State, Mukaila, a son of 87-year-old Buraimo Oyetola, was filled with sadness over the condition of his father and lack of money to properly take care of his eye problem.

Mr Oyetola retired in 1985 as an Assistant Executive Officer at the Account Section of the Ogun State Fund Council and started farming. However, in 2013, he developed cataracts, a condition affecting the eye that causes clouding of the lens and results in vision loss.

He said his monthly pension, which is also less than N5,000, does not suffice for his medications or feeding.

Mr Oyetola’s son said they had taken him to several hospitals but they no longer take him for regular checkups due to a lack of funds.

“Since we can’t afford regular checkups anymore, we now buy drugs from Abeokuta to manage the situation. There is the medicine we buy called Vision Plus, there is one N6000 and another one for N14,000,” he said.

In May 2022, retirees under the aegis of NUP across the South-west cried out that state governors in the region were owing them N242 billion in gratuities and pensions

The NUP National President, Godwin Abumisi, who retired from the Anambra State Civil Service in 1984, said there is no issue with payments of gratuity at the national level. But as regards the state government, “we have a very serious problem.”

“The law of Nigeria covers appropriate pension and gratuity. We don’t know why the state government is owing,” he said.

“We are going to compile a list of those states and their governors who are not paying pensions. We are going to collect the amount that is owed and forward them to the EFCC and see what will come out of it,” he said.

While many Nigerian states like Ogun and Ondo find it difficult to pay the poor and irregular pension and gratuity of their retired civil servants, they award huge sums as pensions to former governors and their deputies.

While this was justified as a means to tackle corruption by ensuring ex-leaders have enough to fall back on after leaving office, the initiative has been flawed, as some governors have been jailed for corruption.

The laws provide humongous benefits to past governors and deputy governors; ranging from free property worth up to hundreds of millions, free medical services, vacations, cars and other outrageous demands on the revenue of the state.

Nigerians have wondered why ex-governors and their deputies, who at most served for eight years, enjoy largesse while civil servants who worked for decades are paid poor and irregular pensions.

In July 2022, the Socio-Economic Rights and Accountability Project (SERAP) filed a lawsuit against the 36 state governors over funds budgeted to pay ex-governors life pensions.

The civic group noted that over N40 billion had been paid to 47 former governors from 21 of the 36 states in pensions and for the provision of other services.

Adodo Patrick, 66, who lives and farms at Akoko Southwest in Ondo State, said he had “given up” on the government delay in gratuity payment since he retired in 2018 as a school principal at Ondo State Teaching Service Commission (TESCOM). The investments he made on his farm during his service at TESCOM are now helping him to meet his basic needs, according to him.

“I worked as a teacher and retired as a school principal at Ondo State Teaching Service Commission, Akure. I served the government for 34 years and retired in August 2018. We have been applying for the payment of gratuity, but nothing. Even people who have retired since 2012 haven’t gotten it.

“Even pension payments are not regular, the one we received last now is for May 2022.”

Mr Patrick said his savings and his farm have ensured he does not suffer from the government’s failure.

“Whether the government is paying gratuity or not, I have some savings from my job. I made some investments. Whether they pay or not, it doesn’t bother me,” he said.

In his comment on late gratuity payment in Ondo State, the NUP chairman, Johnson Osunyemi, noted that: “Gratuity payment has not been well managed in Ondo State and what happened is that there is a very huge amount of money they are owing the pensioners and this one has been occurring for a very long time.

“There was a time when people got their pension as they leave the office or even while they are planning to leave, but everything has scattered now, and the debt is increasing. As of today, we have a backlog of about N65 billion being owed to the pensioners in Ondo State.

“We have met with the government several times and last two weeks we were still with the Head of Service and then last week too, we had a meeting on the pension commission board. In the constitution of the PENCOM, pensioners are expected to receive their payment at the point of their retirement and the pension will be paid over a specific period.”

Mr Osunyemi also noted that the state has no provisions for old people’s homes, but they “are even expecting that the government will put us on life insurance at least as they continue to enjoy a new means of life.”

He urged the government to ease the process of verification of pensioners.

“We want the government to do something to improve the quality of verification given to the senior citizens. Old people don’t have to come and be queuing endlessly for something that may not even be forthcoming.

“For payment, we were normally on e-payment. As soon as the money is ready, you go to your bank and withdraw your money, so the issue of queuing for pensions doesn’t occur,” he said.

Nigeria as a signatory to global commitments

Globally, the UN Universal Declaration of Human Rights (1948) is the bedrock for inclusion and respect for the rights of all, irrespective of age, race, colour or sex.

The first and second World Assembly on Ageing by the United Nations General Assembly endorsed the International Plan of Action on Ageing in 1982 and 2002 respectively to provide guidance to countries to develop policies that ensure the inclusion of older persons in the country.

Other global development agendas and commitments for countries to ensure care and support for older persons include the Sustainable Development Goals (SDGs and the WHO-declared Decade for Healthy Ageing. In Africa, we have the African Charter on Human and Peoples’ Rights 1981, the AU Agenda 2063 and the AU Policy Framework and Plan of Action on Ageing.

As a signatory to the global and regional commitments, Nigeria signed the National Senior Citizens Centre Act 2017 into law to cater for the need of senior citizens in the country and related matters.

The Act gave birth to the establishment of the National Senior Citizens Centre (NSCC) in January 2018. But nothing was heard from the federal government as regards its implementation until June 2021 when President Muhammadu Buhari approved N2.5 billion take-off grant in October 2021.

Primarily, the NSCC Act intends to facilitate Section 16 of the 1999 Constitution, which provides that the state shall direct its policy towards ensuring “that … old age care and pensions, and unemployment, sick benefits and welfare of the disabled are provided for all citizens”.

Its functions include identifying the needs of senior citizens and taking responsibility for creating recreational, sports, health, educational, counselling and social programmes for their benefit. It is also expected to develop and implement schemes to provide income or supplementary earnings for aged citizens.

(This is the second of a three-part series. Read the first part here).

This article was produced as part of the Inequality Reporting Fellowship of the Africa Centre for Development Journalism (ACDJ) supported by the MacArthur Foundation through the Wole Soyinka Centre for Investigative Journalism.