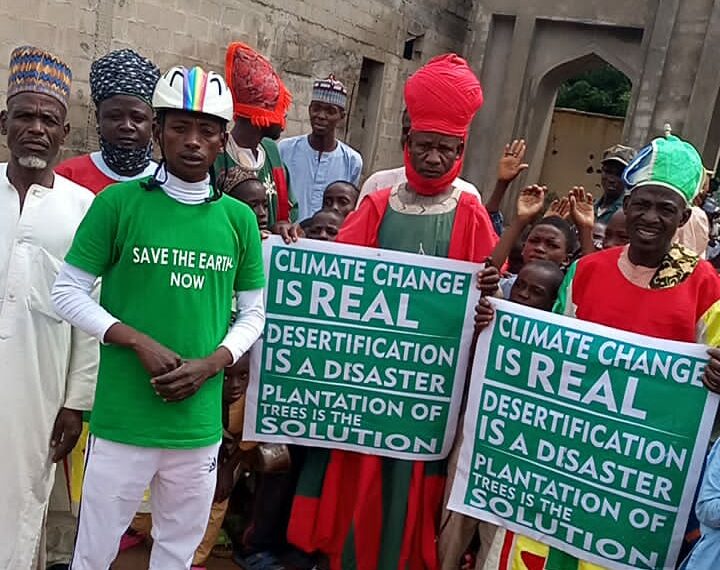 With representatives of a traditional ruler in karaye Kano

Mr Sani is determined to cycle across northern Nigeria to teach villagers how to tackle the adverse effects of climate change.

When he was a young boy, Yunusa Sani, 27, just wanted to finish school, get a good job, buy a house, and drive a flashy car. At no time did it occur to him that he would take up a career that involves educating the public about the adverse effects of climate on the lives of common people.

Mr Sani, a trained teacher with a National Certificate of Education, does not own a flashy car yet, but he resolved to travel across northern Nigeria on his bicycle to teach local people about climate change. He said his resolve is tapped from the devastating effect of climate change in his village.

“It’s (climate change) very worse in my village in Ingawa (Katsina). It’s obvious but unfortunately, most people don’t know what it’s. Our land has become very unproductive and the number of rainfall days per year has reduced,” he said.

It goes beyond that. He bemoaned the intense heat and how food production in northern Nigeria is being impacted.

With his bicycle, Mr Sani has now started a movement, a sort of climate activism, reaching out to “stakeholders” to tell them the dangers of climate change. He said he chooses to travel with his bicycles as a means of preaching what he preaches.

The effect of climate change in Nigeria is telling. Extreme weather conditions are more constant causing floods, erosions, droughts, desertification and land degradation, especially in the semi-arid north of the country.

Climate change has also fueled ethnic clashes and insurgency in the North of the country and parts of Central Nigeria. Many analysts point to climate change as the chief cash of banditry and other forms of insurgency.

A 2018 World Climate Change Vulnerability Index, mentioned Nigeria as one of the 10 most vulnerable countries to climate change.

When this reporter met Mr Sani in Katsina in August, he had travelled to Abuja, Kaduna, Jigawa and Kano on his bicycle. He said he covered the trip from Abuja to Katsina, over 600 kilometres in 18 days.

“If not because of the stopover I made on some communities that were not part of where I even intended to stop, it would not have taken me 18 days. Sometimes, I would come to a village and there were people already waiting for me so, I had to stop in those places,” he said.

“I stopped over at most of the villages on the Abuja – Kaduna road. I talked to the farmers, and the rural dwellers because of their importance in this mission. The issue of climate change needs to be tackled if we want to continue getting farm produce and the earlier the better,” he said.

He has, in the course of his journey, also spoken to people about the need to avoid cutting trees though he knows it would be difficult for most rural dwellers to accept the tree-cutting advice.

“Most people in the rural communities rely on the trees to cook food. Prices of gas and kerosene are skyrocketing. I’ve seen it myself and despite the dangers, the people here (North) would prefer cutting down the trees for home and business purposes,” he said.

But in most of the places he has visited, Mr Sani would, among other things, advise that farmers and other residents plant trees in their farmlands and houses.

He said climate change has had a devastating effect on agriculture in Northern Nigeria.

“In our farms in Ingawa, we used to produce Tomatoes and sugarcane in large quantities. Now we only produce millet and corn and even at that, we need to constantly apply fertilizer to be able to get the millet and corn,” he lamented.

He also noted that the extreme weather condition in the north has become worse due to negligence.

He said the land in Northern Nigeria is barely productive.

Mr Sani has travelled across Northern Nigeria almost exclusively on his bicycle. The only time he abandoned his bicycle and used a bus was in Kano when he visited Rano and Karaye in Kano State because the towns were not on the main road.

Mr Sani, who vowed to go to every state in the North-west, said he might not use his bicycle to visit Zamfara, Sokoto and Kebbi States because of insecurity.

“I wanted to start this advocacy last year but had to put it off due to the security situation but we all know that the situation has been on the increase so, I decided to start it this year. I’m not afraid of the terrorists, to be honest with you. I just pray and start my journey,” he said.

In the region, climate change has contributed greatly to the conflict between farmers. Land degradation, changes in the total number of days with rainfall per year, pollution and deforestation have led to a shrinking of arable land resulting in fierce competition between farmers and herders for what remains of the land.

States in the North-west, where banditry and kidnap for ransom persist, Katsina, Zamfara, Sokoto and Kebbi are among the eleven states with severe desertification in the country.

The others being Kano, Jigawa, Gombe, Bauchi, Yobe, Borno and Adamawa States.

The National Strategic Action Plan by the Federal Ministry of Environment on The Great Green Wall estimated that Nigeria loses 351,000 hectares out of the 70.8 million hectares of arable land to desert encroachment.

The passion to do more

Mr Sani said his passion for the environment started as a member of an organisation called Youth Support Against Deforestation where he was part of a group of youths taught how to plant trees and advise local residents about the importance of planting trees, minimizing the use of vehicles, safeguarding trees, and educating people on the impact of climate change.

The group members felt they could do more than just complain by enlightening the public on the need for a “secured society”.

But despite the successes of the group, Mr Sani felt it was not enough. He felt he needed to go out of his comfort zone and expand his reach to ensure that the whole of Northern Nigeria received his message.

“It wasn’t enough for me at all because we needed millions of people to get this message. So, to get people’s attention, I decided to start this journey on a bicycle to meet many people on the road and their localities and have the chance to spread the message accordingly. I want to spread this message to the nooks and crannies of Northern Nigeria because this is something that’s affected us greatly,” Mr Sani said.

Aside from speaking to the people, Mr Sani tries to reach out to local journalists in every state he visits to sell the idea to them to do more stories on the importance of fighting climate change.

Wearing. green coloured shirt with “Save The Earth Now” boldly inscribed on its back everywhere he goes, he brings out his printed placards with inscriptions including “Climate Change is Real”, “Desertification is a Disaster,” and “Plantation is the Solution”.

Mr Sani said he has taken a stand to serve the people despite the challenges he has encountered from whence he started.

Twice he was caught in a storm and his clothes and bags got drenched as he travels from Kaduna to Abuja. He said he thought of abandoning the journey but his willpower prevailed.

In Bichi Local Government area of Kano State, Mr Sani was left stranded in the evening with nowhere to sleep because a “top traditional ruler” asked that he present some documents before he would be given a place to sleep.

“I normally sleep in places provided by the people I meet there. In Bichi, I had to go to the police station but they rejected me too. I even went to a small motel in Bichi but to my surprise, I was denied a room in that place too,” he said.

He said he believed the people were hostile to him in Bichi because of the spate of killing and kidnapping in the North-west of the country. He, however, added that the cold treatment was not enough to dissuade him from his mission.

He said the biggest dampener of his mission was the hurtful comments on social media.

“Some of the young people commenting said I was jobless while others said I was just trying to make a name for myself. A jobless person couldn’t set on such a mission and if it were for name, I wouldn’t be doing this because they’re hundreds of people more popular than I’m even in my village,” he said.

He said he had never been jobless, and though his business “is not that big” he said it is good enough to make him self-reliant.

Away from the negative comments on social media, Mr Sani said the feedbacks he has received so far have been overwhelmingly positive and are the reason he keeps going.

“When I visited a village between Kaduna and Zaria, the village head asked me to sleep over so he could gather everyone in the village to listen to me.”

“It gives me joy and satisfaction to even see that people listen to me. The issue is that a lot of people don’t know how harmful cutting of trees is but with my enlightenment, people are becoming more aware of the dangers involved,” He said.

Asked why he believed his mission was capable of bringing an end to climate change in the country, Mr Sani said his little effort could spur other people’s interests in the fight against climate change.

“It’s not all about wiping it (climate change) but the effort I’m making can make someone understand that, for instance, it’s harmful to indiscriminately cut trees. We can change a lot of things by mere talking,” Mr Sani said.