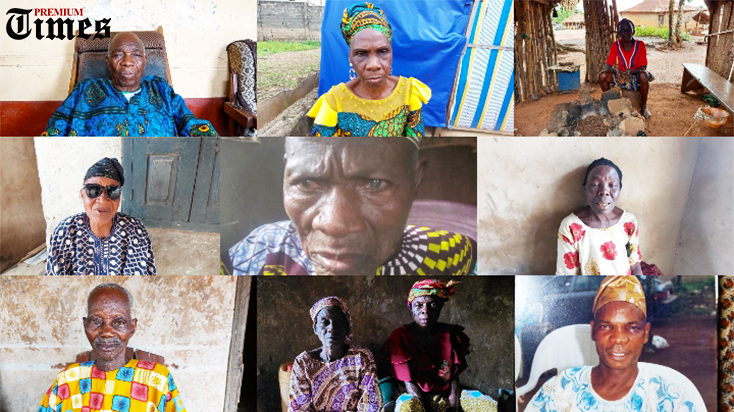 A Collage of Nigerian Senior Citizens.

Nigeria's National Senior Citizens Centre Act mandates the state to direct its policy towards ensuring “that old age care and pensions, and unemployment, sick benefits and welfare of the disabled are provided for all citizens.”

On 11 February 2022, Remi Aye, 65, died at the University of Medical Sciences (UNIMED) Teaching Hospital, Ondo after battling a stroke and hypertension for more than six years.

“If the government had paid his gratuity, maybe he wouldn’t have died,” his widow, Janet, told PREMIUM TIMES, as tears dripped from her eyes.

After working temporarily at the Ondo State-owned Owena Press Limited, publishers of The Hope Newspaper, for two years, Mr Aye’s appointment as a photographer was confirmed on 13 January 1998. He was the newspaper’s official photographer at the Governor’s Office in Akure until he retired in 2018.

This reporter met his widow in their uncompleted house at Agbota in Oda town of Akure South Local Government Area of the state.

“I plead with the government to give us his retirement benefit because I have been living in challenging circumstances with our four children since his death. He tried his best to get his gratuity then but all to no avail, which increased his anxiety and complicated the stroke and hypertension for more than six years.

“A day before his death, we couldn’t immediately take him to FMC Ondo where he was referred from UNIMED as we had sold everything, including the properties he acquired during his service years, to manage the health crisis.

“He went through a lot under the sun and in the rain, Lagos today, Ibadan tomorrow, Abuja next. He knew everywhere in Nigeria because he followed the governor everywhere. All this stress triggered his health condition, yet he didn’t get his retirement benefits,” Mrs Aye said.

The death of Mr Aye also prompted an open letter to the state governor by the immediate former Editor of the newspaper, Banji Ayoola, appealing for the payment of gratuities of over N57 million to retired workers of the newspapers, some of whom he said were “battling age-related illnesses without the financial enablement to combat such.”

Mr Ayoola stated in the letter that “if the government had paid his N3 million gratuity early enough, he (Mr Aye) wouldn’t have died, just yet”.

He stated further: “Your Excellency, you will recall that we had written to you sometime in May 2019 appealing to you to help pay our gratuities which amounted to a little over N57 million for about 19 retired staff of The Hope titles.

“We had pointed out then that staff of Owena Press, which is wholly owned by the state government, are not on the pension scheme and that all they get is their gratuity.”

The ordeal of Mr Ayes and other retirees of Hope Newspaper is an example of the neglect and indignities the older population experience despite a national policy on ageing. Many retirees from the civil service now have to beg for the payment of their pensions and gratuities,

After years of back and forth since 2014 when it announced the plan, the federal government, which has the power to fix the minimum wage across the country, officially launched the National Policy on Ageing in February 2021.

The policy aims to guarantee senior citizens’ security, independence, participation, comprehensive care, self-fulfilment and dignity. It grouped the older population into three categories: 60-74, the young old; 75-79, the aged; and 80 and above: the oldest old.

PREMIUM TIMES obtained the policy document from the Federal Ministry of Humanitarian Affairs, Disaster Management and Social Development through a Freedom of Information (FOI) request. A review of the document revealed that a key aspect of the implementation method, which involves the establishment of advisory councils on ageing at the federal, state and local levels, has not been carried out.

However, the 65-page policy document mandated the government to introduce flexible recruitment and retirement policies with appropriate strategies. It adds that “pension and gratuity should be made available as older persons retire.”

Data from Statista as of September 2022 shows that of the total 206 million Nigerian population, 9.4 million people were aged 60 years and older as of 2020.

Many retired workers in Ogun State still receive below N5000 as pension. 84-year-old Emmanuel Howells is one of them. Having worked for 22 years at the Ogun State Ministry of Education, Abeokuta, he retired voluntarily as a Principal Accounts Assistant in 1984 on a monthly salary of N450. Mr Howells, who has been battling Type-2 Diabetes since 2006, now receives N4,999 pension per month from the Ogun State government.

At his rented apartment in the Ibarapa area of Abeokuta, Mr Howells showed this reporter his right foot. One of the toes had been amputated in 2019 as a result of the illness. He also brought out a polythene bag filled with packets of used medicine.

“I have been struggling as a diabetes patient. The pension I am receiving from the state government is below N5,000. I lost my wife two years ago and I have just a son and his wife assisting me. Since my discharge from the hospital in 2019, I have been given appointments intermittently, I go for tests and it is not free,” Mr Howells told this reporter.

According to him, “life would have been easier” if the state government led by Governor Dapo Abiodun had reviewed the pension to conform with the current economic reality of the country.

In August 2022, the annual inflation rate in Nigeria accelerated to 20.52 per cent from 19.64 per cent recorded in July, above market expectations of 20.25 per cent and remaining at the highest level since September 2005, data from the National Bureau of Statistics (NBS) said.

The report attributed the rise in food inflation to the increase in prices of bread and cereals, basic food products like potatoes, yam and other tubers, fish, meat, oil and fat.

Due to his medical condition, Mr Howells was told at the Ogun State General Hospital to avoid certain food items.

“Feeding has been expensive because I was told not to take certain food like eba, bread, fufu, plantain, so it takes extra effort to provide the ones I can take like amala, rice and beans, yam, vegetables and fruits,” he said.

“If I want to eat breakfast now, N300 is not enough. I take food on credit from someone close to this place, make arrangements, collect foodstuffs till I receive pension because my only child is unemployed and married, I can’t be a burden. So that is how we live.”

Meanwhile, the national policy on healthy ageing recommends that the government should provide subsidised healthcare services for older persons, and develop and implement a strategy for the management of chronic health conditions and long-term care which become more prevalent in old age.

According to the WHO, common health challenges in older age include hearing loss, cataracts and refractive errors, back and neck pain and osteoarthritis, chronic obstructive pulmonary disease, diabetes, depression and dementia.

Unlike Mr Howells, Funmilayo Dipeolu, a 70-year-old widow and mother of six, is still hopeful that the government will increase her pension. She receives N4,845 monthly after serving as a messenger at the Ministry of Information, Oke Mosan, Ogun State for 17 years. When she retired in 1998, her monthly salary was N1,200.

“Running errands daily at the ministry with only N1200 as salary was draining my energy, so I resigned in 1998. I was paid N7,888 as gratuity and since then my monthly pension has stood at N4,845 per month. It would have been different if my husband was to be alive, but he is not,” she said.

“Things are now expensive in the country. The pension can be exhausted in a day, as I have six kids of whom five are unemployed and the last born studies at the University of Ibadan (UI).

“I am currently battling ulcers and there are prescribed drugs that I buy too. Living is really difficult because, many times, I don’t get to eat well. It is bad luck that we get to have dinner after breakfast,” she added.

She urged the government to increase pensions and empower widows and women like her.

At 67, Kehinde Richard who left service as an auxiliary teacher in Osun State in 1974 is willing to start up a business but he has no capital. He said empowerment programmes brought to the community are mostly youth-focused.

He had worked at the Cocoa Development Unit in Ondo State before he left for Osun to work as an auxiliary teacher.

“For some of us between the ages of 65 and 75, we can still get something done on the farm if we are empowered with some money.

“In some cases when the government brings programmes to the community, they are only interested in the youths. But we the old have enough experience, just that there is no fund to start something,” Mr Richard said.

A study by the United Nations Department of Economic and Social Affairs (UNDESA) in 2016 explained that economic inequalities exist among older persons, leaving many of them excluded from prosperity, resources and decent work, adding that older women disproportionately experience income insecurity

Out of 44 countries, Nigeria ranked 33rd on the chart of the percentage of older persons who own an equal or lower amount of wealth per capita as the poorest 20 per cent of the total population.

The index was calculated with data on household ownership of assets such as televisions and types of access to drinking water. Based on this indicator, older persons are poorer than the average population in 30 out of the 44 countries shown.

However, the Sustainable Development Goals give priority to promoting equality and inclusion. Goal 10 calls for reducing inequalities in income as well as those based on age, sex, disability, race, ethnicity, origin, religion or economic or other status within a country.

This is the first of a three-part series produced as part of the Inequality Reporting Fellowship of the Africa Centre for Development Journalism (ACDJ) supported by the MacArthur Foundation through the Wole Soyinka Centre for Investigative Journalism.