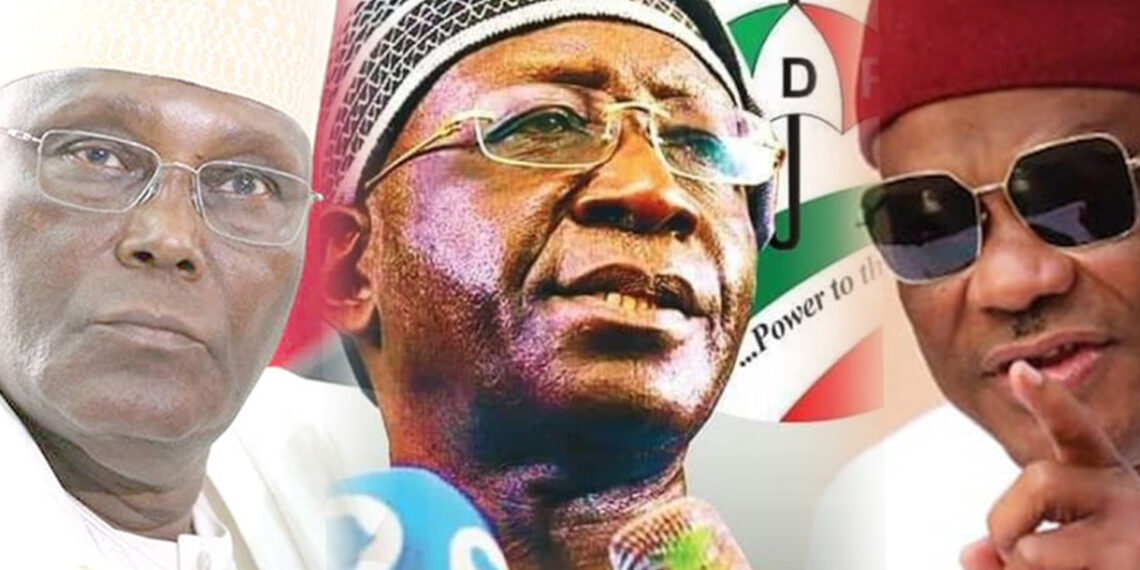 A fresh twist appeared in the PDP last week as four members of the National Working Committee returned sums ranging from N28 million to N36 million.

For the most part of last week and previous weeks, many headlines of reports from the main opposition party, the PDP, read “crisis in PDP deepens”, or “PDP crisis worsens”, and so on. And if one is to predict headlines in the coming weeks, it will be that there will be more “deepening” – so much so that the party could find water or even crude oil if care is not taken.

The PDP, however, is not the only party going into the campaign season with an internal crisis. There is the ruling party, APC, where some members are either angry about the composition of the Presidential Campaign Council or the absence of their presidential candidate, Bola Tinubu or, as stale as this might sound, its Muslim-Muslim presidential ticket. There is also the African Democratic Party where even though the presidential candidate, Dumebi Kachikwu, has mapped out campaign plans, some party executives insist he has been expelled from the party.

Anyway, back to the PDP. Both the party leadership and its presidential candidate, Atiku Abubakar, decided to move on with campaign plans and the 2023 election. “Move on” because, at a time, it seemed as though the party was being pulled back by some aggrieved member led by Nyesom Wike, the Rivers State Governor.

An angry Mr Wike had demanded Mr Ayu’s resignation and that the leadership structure of the party be reshuffled to ensure better representation of the South.

Now, many members of the party, particularly chieftains and those on Atiku’s team, believed there is only so much they can do to appease Mr Wike and advised his cries should be shelved aside.

Mr Ayu did not leave. Walid Jibrin was the sacrificial lamb who resigned from his position as the chairman of the PDP Board of Trustees, for the sake of peace and unity in the party.

“We all want to make Atiku Abubakar become the president by all means, and that is why I sincerely decided to step down from the BoT,” he told members of the BoT. “I discussed this with the candidate and he agreed with me. I am sure if the party wins, I will be given a bigger position.”

He was immediately replaced with a former Senate President from Abia State, Adolphus Wabara, in an acting capacity.

Many say Mr Jibrin’s resignation was the best the PDP could do to appease Mr Wike and other aggrieved members. This is because should Mr Ayu resign as demanded, he would need to be replaced with the Deputy National Chairman (North) – Umar Damagum. But the resignation was not enough to please Mr Wike and other aggrieved members including governors Seyi Makinde of Oyo State, Okezie Ikpeazu of Abia State and Samuel Ortom of Benue State.

The party eventually produced a 600-member Presidential Campaign Council. And although Messrs Wike, Makinde and Ikpeazu’s names were on the list, they pulled out of Atiku’s campaign insisting that Mr Ayu must go.

Again, ignoring the demands of the aggrieved members, the party inaugurated the council to mark the start of campaigns. And noticeably absent were the River State governor and his allies. 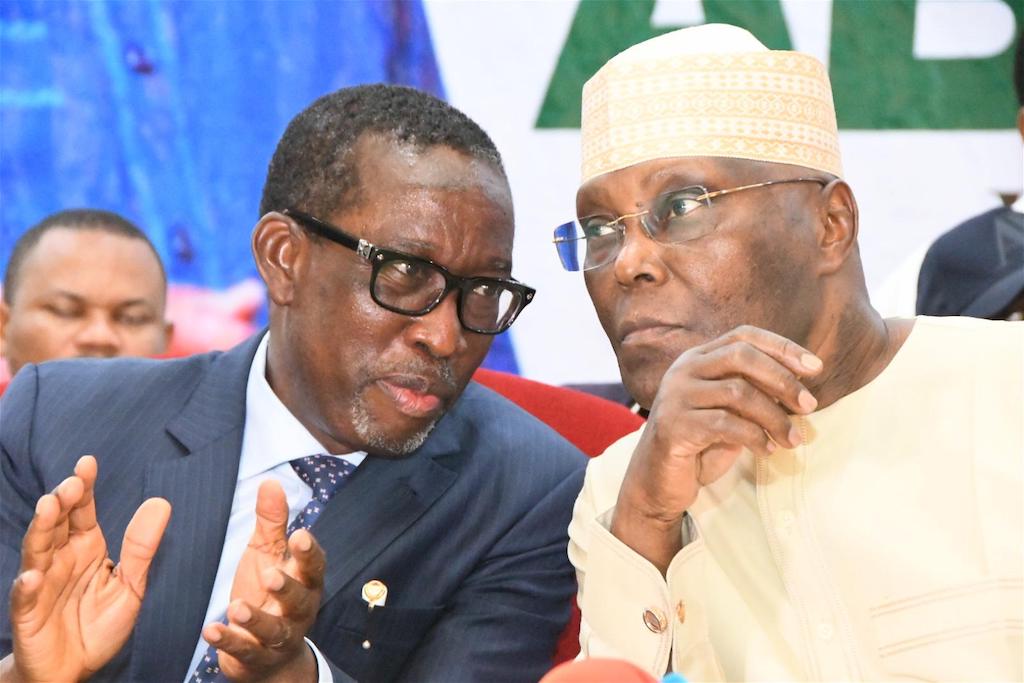 Besides charging the council members to work hard and procure victory for the party, one other thing that speakers at the event echoed was an appeal to aggrieved members. Messrs Atiku, Okowa, and Udom all preached the need for unity and for all members to work together for the common good.

Nigerians were still awaiting the next twist in the party’s crisis when letters from some members of the National Working Committee (NWC) surfaced online. In the letters, addressed to Mr Ayu, the members – at least four of them – said they were returning sums ranging from N28 million to N36 million paid into their bank accounts by the party.

The decision to make the refund, they said, became necessary after reports suggested that Mr Ayu had attempted to bribe them. They said they noticed the payment after the media accused them of taking bribes.

The revelation came about a week after Mr Wike, in an interview, alleged that the national chairman bribed some members to the tune of N1 billion. It also came days after media reports claimed that some members of the NWC had received bribes from Mr Ayu to get them on his side.

Some key questions are, would the NWC members have returned the money if there were no reports alleging a bribe? Have they received other payments like that and kept mum about it? The party described the money as payment for housing allowance (a routine payment to staff). If it was a housing allowance, why are they returning it? And will they reject subsequent allowances for fear of being accused of taking bribes?

We could ask why Mr Ayu has not said anything about it but we know better. Since his back and forth with Mr Wike on who is a child and who is not, he promised to keep quiet and not react to comments. And in this case, which is indicting to him, silence is golden.

No matter how they try to hide it, Atiku and the PDP are worried. And they should be. The recent giveaway to some NWC members poses a huge threat to his campaign plans and his chances at large. Besides Mr Wike who would probably be laughing at a corner and saying ‘I told you so’ in his firm and husky voice, Nigerians are not finding it funny.

The PDP has been exposed to ridicule over corruption by its officials which did not start today.

“Look at the Party that wants to rescue Nigeria. A leopard cannot change its skin! Nigerians have since left Egypt. They can never go back to the era of PDP,” Festus Keyamo, APC spokesperson, tweeted. “This makes the story of PDP even worse. How can you use about N30 million of scarce party funds to pay for the house rent of just ONE MEMBER of the NWC? A party struggling to regain power at the centre? Gosh! Instead of this ludicrous refutal, Nigerians should be getting an apology.”

Atiku appears confused. Confused because while he cannot grant Mr Wike’s demand, he somehow strives to make amends and get him (Wike) on his side. This probably prompted the meeting between the two in Abuja on Saturday.

Some pundits say Atiku’s restlessness is perhaps Karma coming to play after he ignored the party’s policy on zoning to pick the presidential form. Amid the clamour for power shift to the South, based on Article 3(c) of the PDP constitution “adhering to the policy of the rotation and zoning of the party and public elective offices in pursuance of the principle of equity, justice and fairness”, Atiku used every tool in his play to clinch the ticket, including his ally Ayu and Governor Aminu Tambuwal of Sokoto.

A thorn in the side

Safe to say the peace Atiku badly needs now lies in Mr Wike’s palm – which remains tight until his demand is met – Ayu’s head on a platter.

Reports from Saturday’s meeting reveal that no truce was reached and Mr Wike still insists that Mr Ayu has to go. His insistence on Mr Ayu’s resignation till now, and a proper representation of the South in the leadership structure of the party, spells just how unbothered he is.

In addition to his carefree mood, he has, in the past week, met with members of other parties. He met with the Labour Party presidential candidate, Peter Obi. he also attended the inauguration of the Body of Benchers done by President Muhammadu Buhari.

Whatever Mr Wike’s endgame is, Atiku is worried that Mr Wike working against him could hurt his chances, particularly in the Southern region.

While he has gone around preaching the message of hope and how the PDP needs to rescue Nigeria from the shackles of APC and how Nigerians need to cooperate with the PDP to ensure victory is possible, one thing Atiku has said is that he will make sure a candidate from the South-east takes over from him.

He needs to stop.

Many have faulted this comment and would describe it as hypocritical seeing that if he truly wanted to support a southeastern candidate, he would not have purchased the ticket at the time – especially since there was a clamour for the ticket to be zoned to the region.