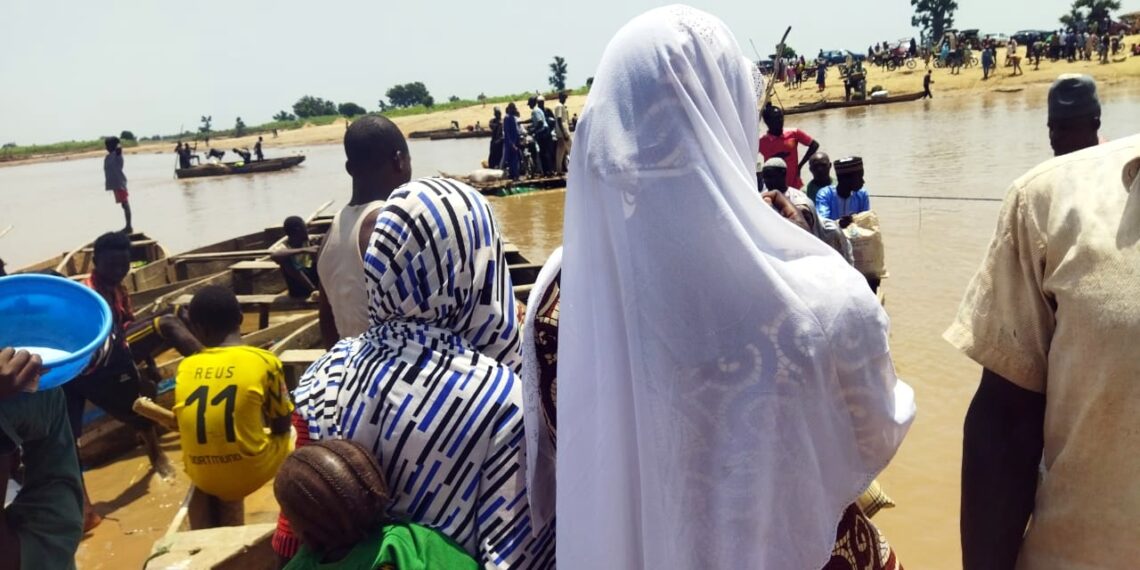 The police said at least 100 people died from floods between August and September in Jigawa State.

Early in September, Aliyu Husseini, a boat driver in Jigawa, Northwest Nigeria, was arrested and detained by the police after his boat capsized, killing eight passengers.

The police later released Mr Husseini without charges. He told PREMIUM TIMES that he has since returned to work: ferrying passengers in his shallow canoe without providing them life jackets.

Residents of Birnin Kudu, where Mr Husseini does business, resorted to travelling in canoes after a flood swept away the bridge which linked the area with neighbouring Kano State.

Since torrential rain began in August, floods have displaced thousands of people and killed over 100 across the state. Many families have also lost their homes, livestock, and farmlands. The floods have also destroyed infrastructures like dams and bridges and washed away several roads.

Transportation by boat in the state is not regulated. Thus operators often overload their boats and seldom provide life jackets to commuters.

Mr Husseini told PREMIUM TIMES that he makes between N30,000 and N50,000 daily from ferrying people and goods across the water where the Birnin Kudu bridge used to be before it was destroyed by flood.

He was providing a useful service to the community where the government has failed.

“We are doing our best to help the people. Without us, the situation could have been more difficult because there is no government presence here. We need government support, only journalists are coming here, the police came once and arrested me and others because our boat capsized.

“We have discovered at least 20 corpses in this area some of which the water carried from other communities. We buried some of the corpses after they were unclaimed, and others were given to their relatives for burial.

“We give a discount to people from Birnin Kudu taking their sick ones to hospital in Dutse, but we don’t collect money from aged people, and from people carrying their dead,” Mr Husseini said.

Mr Hussaini’s colleague, Ya’u Musa, said he was a boat operator in Lagos, south-west Nigeria. He said, unlike in Lagos, Jigawa boat operators are not mandated to provide life jackets for their passengers.

“We are self-regulated. Each boat takes 12 passengers per trip collecting N50 per person but when the water level is high, we take only five people and double the amount to cover the gaps.

“In Lagos, if five life jackets are allotted to the boat, it means that only five people are allowed to enter the boat, there is no chance for overloading because anybody without a life jacket will not be allowed to ferry,” Mr Musa said.

As it is in Birnin Kudu council, so it is in several flood-ravaged areas in Jigawa State. Many of these communities now commute by boat. In Ringim Local Government Area, which is one of the worst-hit areas, floods have sacked 11 communities, damaged several facilities and displaced thousands of people, officials said.

How I lost my family in a boat mishap

Surajo Ya’u, a resident of Dabi in Ringim Local Government Area, narrated how he lost his wife, child and mother-in-law in a boat accident.

Mr Ya’u said his wife, Nasiba Muhammad, his mother-in-law, Suwaiba Mustapha, and his son Mahmud, died during a trip to Siyango for a condolence greeting.

“This is not what we anticipated, but we don’t have to question God,” Mr Ya’u said.

He described the boat accident as the worst that has happened in Ringim Emirate.

“The accident will be in our hearts forever, all I can say is May Allah have mercy on them,” Mr Ya’u said.

Several residents of Ringim said they lost everything they had to the flood.

“I have lost my livelihood, our houses have been submerged, our livestock is nowhere to be found, I survived the flood and moved to the internally displaced camp with only a wrapper on my waist and a Hijab (veil) on my neck,” said Rabi Hassan, who is from Majiyawa.

“My three sheep, five goats and about ten chickens perished in the flood and I have nothing now aside from the money and foodstuff ‘Dallatun Ringim’ (Danladi Sankara, the senator representing the district) gave to us,” Mrs Hassan said.

The head of Majiyawa, Abdullahi Sabo, said the flood washed away at least 300 farmlands.

“We have relocated to the primary school until the flood subsides,” he said.

“We received donations from Danladi Sankara. But we need more assistance from the state government. We also want to be relocated from this riverine area,” he said.

Hundreds of residents of Haya in Gwaram Local Government Area will miss out on this year’s dry season farming as the dam water they use for irrigation overflowed and flooded several farmlands.

One of the community leaders, Muhammadu Ibrahim, appealed to the Hadejia/Jama’are River Basin Authority (HJRBA) to immediately reconstruct the Haya Dam. He said if the dam was not repaired several residents of the area will migrate to other places with more fertile land.

Mr Ibrahim said the dam was built 12 years ago. He said before the rain, residents had complained to the authorities that the dam was in need of repairs but nothing was done to fix it.

The impacts of floods in Jigawa are most noticeable on agriculture. The flood has destroyed large swathes of farmlands and crops. Residents said the state government has not provided relief materials or remedial measures to farmers in the area.

“Our goods are perishable and transporting them is not an easy task,” said Mu’azu Muhammad, a tomato trader in Birnin Kudu.

“We were spending N1000 to convey the animals, now it is N1,500. I have to pay an additional amount to boat owners to take my livestock to Dark market in Kano State,” Sale Abdu, a livestock seller, said.

“We are appealing to the government to fix the bridge to withstand disaster, this is what we need,” Mr Abdu said.

Riverine areas and way out

The head of Green and Environmental Project Initiative, a civil organisation in Jigawa, Ahmed Illallah, said riverine communities in the state are the first victims of floods.

He said the water in the Ringim area will subside while the Hadejia area will feel the effects as the water flows down to Lake Chad.

Mr Illallah said the floods of 1988, 2018, 2020 and the current year were devastating. According to him, the Hadejia Emirate, which mostly falls under Hadejia Jama’are River Basin and Komadugu Wetland, is the most vulnerable area.

“Hadejia is directly on the water tributary that channels itself into Lake Chad, the area is dangerously exposed to flooding. It was even advised by climate experts that Hadejia should be relocated to avert being submerged by the flood.

“The flooding of 1988 caused the life of many people and destroyed farmlands and houses, rendering many people homeless. In the flood of 2020 between 13 and 19 September, downpours ravaged many communities in the Hadejia Emirate. The condition in places like Auto, Kafin Hausa, Bulangu, Guri, and part of the KiriKassama area is quite alarming,” he said.

“This year, the area is witnessing high rainfall, a signal of the extent of global warming, in addition to our normal challenges of river flooding which occurs almost annually. The flooding was mostly caused by the discharge of river Hadejia, which cause the flood and destroyed houses and farms.

“The Jigawa Government has done a lot of work evacuating sand and removing cypher grasses in the waterways across the river line. But in the neighbouring Yobe State area where the river conjoined to fall to Lake Chad, the river is full of sand and cypher grasses.

“If Yobe had made a similar effort to Jigawa, this flooding issue will be drastically reduced,” Mr Illallah said.

The Executive Secretary of State Emergency Management Agency (SEMA), Sani Yusuf, did not respond to phone calls and messages requesting him to speak about why the state has not been regulating boat operations and other issues raised by some of the flood victims.

Mr Yusuf had earlier told reporters that the flood destroyed over 57,000 houses and displaced at least 100,000 people.

He said some of the displaced people were in 49 internally displaced people’s camps in the state. adding that some were staying in relatively safer communities with their relatives pending when the flood water will subside.

Mr Yusuf had also said the agency was assessing the damage done to farmlands, roads, and other infrastructure by the disaster.

One killed in farmers-herders’ clash in Kano