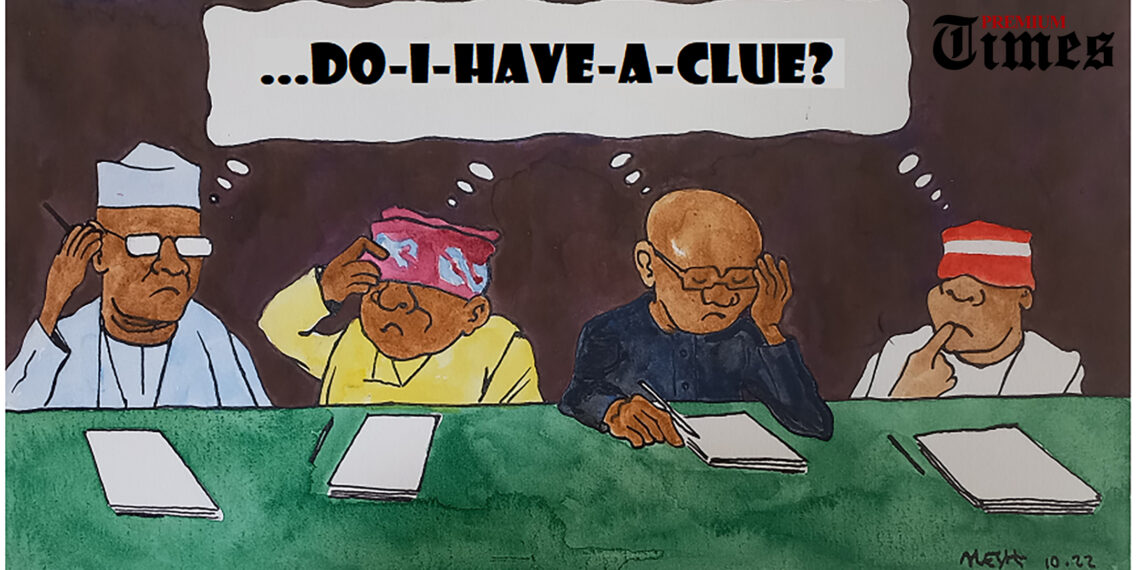 The era of offering tokenism as dividends of democracy is over. Nigerians look forward to a president next year who will be decisive...

The floodgates for 2023 general elections campaigns were opened last Wednesday, following the timeline of the Independent National Electoral Commission (INEC). The 18 registered political parties would jostle for legislative and governorship seats. The most coveted diadem is however the presidency of Nigeria. Arguably, the race for the top seat offers Nigerians the strongest options never seen since the Fourth Republic began in 1999. The candidates and their parties, therefore, will traverse the length and breadth of Nigeria with their manifestos to justify why they should be entrusted with the office. This will by no means be an easy task.

As it appears, the electioneering season in Nigeria has become an orchestra of deception, as electoral promises are never kept. Nobody is in doubt that the country has been spiralling in a manner symptomatic of a failing state. Questions are often asked about the value of human life in Nigeria, with the routine wanton killings of citizens by non-state actors without consequences; the poor state of the economy; rampant corruption; decrepit public infrastructure; neglect of education and healthcare delivery. Every government since 1999 had promised to address these challenges, with no significant results till date. Nigerians are yearning for a change of this awful scenario: from vacuous electoral promises, to candidates with measurable performance indices and timelines for delivering them.

Insecurity has rendered Nigeria prostrate since Boko Haram terrorists took the North-Eastern states of Borno, Yobe and Adamawa by storm in 2009. The emergence of the Islamic State’s West African Province (ISWAP) within the ranks of the extremists has compounded the national security woes. Villages have been wiped out; armies of widows and orphans have risen, students have been kidnapped, and over 1.9 million Internally Displaced Persons have been created to constitute a humanitarian tragedy.

A report by the United Nations Development Programme (UNDP) in 2021 stated that the insurgency directly resulted in the death of 35,000 persons in the North-East region, while an estimated 314,000 people died from “indirect causes” at the end of 2020. Official duplicity has made it impossible for 400 identified Boko Haram financiers to be put on court trial since February 2021, whereas the United Arab Emirates promptly put six of them on trial and obtained conviction.

This eerie landscape has spread to the other regions of the country, epitomised in the industrial scale of kidnapping and banditry in the North-West, the astronomical rise of the Biafra irredentist movement in the South-East, alongside herdsmen killings of rural farmers over rights to grazing routes. The next president, therefore, already has his work cut out for him.

The cumulative effect of these is that Nigeria was early this month ranked as the second most terrorised country globally after Iraq by the Global Terrorism Index. By the end of 2019, the country had incurred the largest economic impact of $142 billion from insurgency, said the GTI.

This dubious distinction was made possible by large swathes of ungoverned territories taken over by non-state actors throughout the country. Meanwhile, there are only about 300,000 police personnel in the country. About 40 per cent of them are on VIP guard duties, thus leaving the majority of Nigeria’s estimated 200 million people at the mercy of non-state security actors.

A president of Nigeria in 2023 must deconstruct this security template by re-building its architecture through the instrumentality of complimentary layers of policing, from the federal to the state and community levels. Exclusive centralised policing in a federation leaves much to be desired in terms of a comprehensive security umbrella, as practices in other jurisdictions show. In the present circumstance, restrictive national policing has inflicted violence on Section 14 (2) (b) of Nigeria’s 1999 Constitution emphasising that “the security and wellbeing of the people shall be the primary purpose of government.”

Declaring for the devolution of powers as the ruling All Progressives Congress did in 2015, which some candidates this time have re-echoed, will not be sufficient for the electorate to trust them. They need to move a step further. How it will be entrenched and funded are granular details the electorate would want to hold on to.

Insecurity has gravely affected the economy: it has driven both local and foreign investors away from some parts of the country and made farmers to abandon their farms out of fear of being kidnapped. As the spokesman of one of the Presidential Campaign Councils put the matter in bold relief recently: Nigerians are hungry and they are looking for who will bring food to their dining tables. This existential challenge has morphed into public anger, evident in spiky social media activities.

Nigeria’s public institutions have collapsed. They should be reactivated to fulfil their purposes. The established tradition that the public treasury is despoiled recklessly without consequences must be stopped. It has stymied development. A national rebirth is badly needed. Barack Obama’s excoriation in 2009 during his first official trip to Africa as President of United States perhaps had Nigeria in mind when he said that, “Development depends upon good governance. That is the ingredient, which has been missing in far too many places, for far too long.”

It is unfortunate that Nigeria borrows for consumption as the N11 trillion projected 2023 budget deficit reveals. It is a cruel irony that after it freed itself from a debt overhang in 2004, paying as much as $18 billion to the Paris Debt Club, the country is firmly back within the debt trap. A recent statement from the Debt Management Office put the total debt stock (domestic and external) at N42.84 trillion or $103.31 billion for federal, states and the Federal Capital Territory. How the funds were utilised remains a matter of public interest.

Corruption seems to be the only business thriving in the country. Global Financial Integrity, a US-based group has bared it all. Relying on World Bank and International Monetary Bank data, it said a staggering $182 billion was stolen from Nigeria, and laundered offshore, between 2000 and 2009, under this Fourth Republic. A strategic policy response is required to address this scourge, which spikes annually. Any candidate who does not see corruption as a binding constraint or obstacle to national development that requires a frontal assault is not fit to be president.

It is corruption that has sustained the vexatious oil subsidy, for which Nigeria spent $74.3 billion or N13.7 trillion between 2005 and 2020, NEITI disclosed recently. There is no accurate official figure just yet, of the quantity of daily fuel consumption. This is a dent on the flaunted integrity of Muhammadu Buhari’s administration. It is an utmost shame that a major crude oil producer imports petroleum products even from countries that are not oil producers. The next president must stop this national embarrassment and compel international oil companies to remit their outstanding taxes, royalties and levies, which stood at $6.4 billion as of July 2022, according to NEITI. It is only in Nigeria that these firms perpetrate such contractual breaches, in the process make the economy to bleed.

Off season elections in Anambra, Ekiti and Osun states evinced the fact that politicians always devise strategies to undermine the integrity of the electoral process with massive vote-buying. But INEC has upped the ante in the use of technology to conduct credible polls via electronic voter accreditation, collation and transmission of results. Desperate politicians hell-bent on undermining this improved system should be made to face the full wrath of the law.

Ultimately, the economy should be productive enough to create jobs massively for the youth, wealth, and improve national well-being. However, this cannot be achieved amidst the perennial collapse of power distribution through the national grid, which has recorded eight nation-wide ruptures this year alone. This sector requires re-engineering as part of the disruption of the system to create a truly federal polity.

The era of offering tokenism as dividends of democracy is over. Nigerians look forward to a president next year who will be decisive, forthright and who will shun cronyism and nepotism in governance, which sadly has reached epic proportions in the current administration.

Why Bawa’s conviction on contempt charge is wrong – EFCC