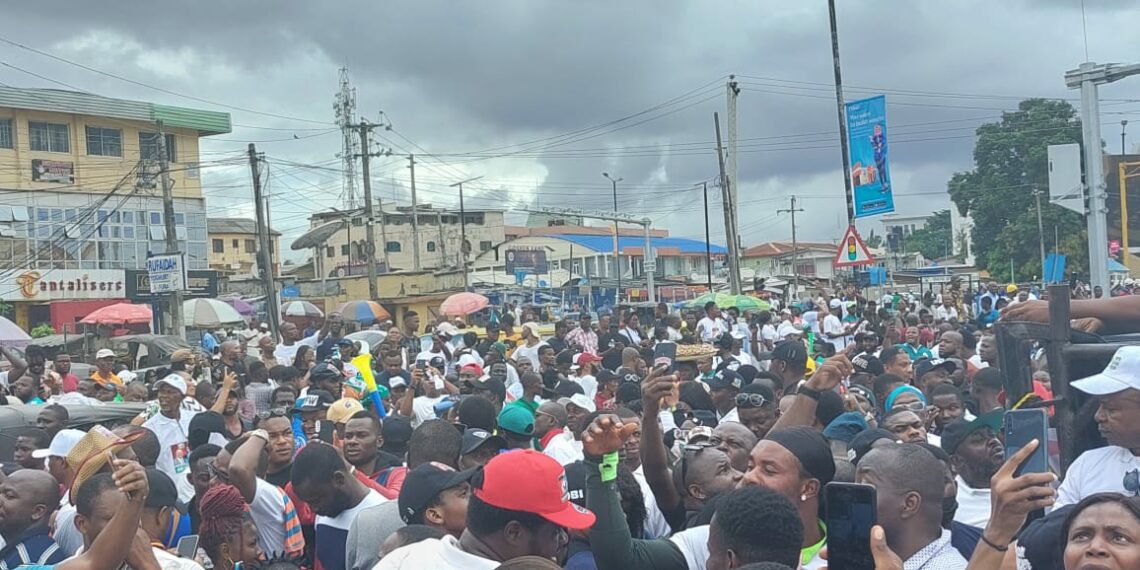 The Labour Party presidential candidate’s supporters defied the morning downpour to participate in the #4MillionManMarch4PeterObi.

The vehicular traffic in several parts of Lagos metropolis was grounded from Saturday morning till early afternoon after thousands of youths marched along major roads in support of Peter Obi.

The Labour Party presidential candidate’s supporters defied the morning downpour to participate in the #4MillionManMarch4PeterObi held at Lekki, Surulere, Ikeja, and Festac Town – the organisers planned to assemble one million people at each of the venues.

At Ikeja, the supporters assembled at the Archbishop Vining Church from 7 a.m. amidst a contingent of armed police officers. At the same time, a similar crowd had gathered at the FHA ground in Festac Town, and at the National Stadium in Surulere.

At Lekki, the supporters marched along the Lekki-Epe expressway, avoiding the tollgate where over a dozen police patrol vans and armed officers laid siege.

Ten persons had attempted to stop the rally through a court order, filing a suit before the Federal High Court in Lagos stating that the event could precipitate a repeat of the 20th October 2020, #EndSARS violence. They urged the court to stop the rally at the tollgate or any other part of Lagos.

The judge dismissed the suit, saying the people have the right to assemble anywhere in the state. He, however, ordered the supporters to pass through the Lekki tollgate to their destination and not stop at the plaza.

As the rally got underway Saturday morning, armed police officers watched closely, but the participants were undeterred. They marched through the major roads chanting ‘Obi’ and dancing to some popular Afrobeat songs.

“You are one of us, I know you have a son like me,” a participant fired at a police officer who sat in a patrol van along the Lekki-Epe expressway, filming the procession on his mobile phone.

In Ikeja, the procession marched from the GRA through Mary Land, Opebi, and finally to the Computer Village axis.

Fibiyi Shola, a business analyst, said the rally is important to let Nigerians know that power belongs to them. 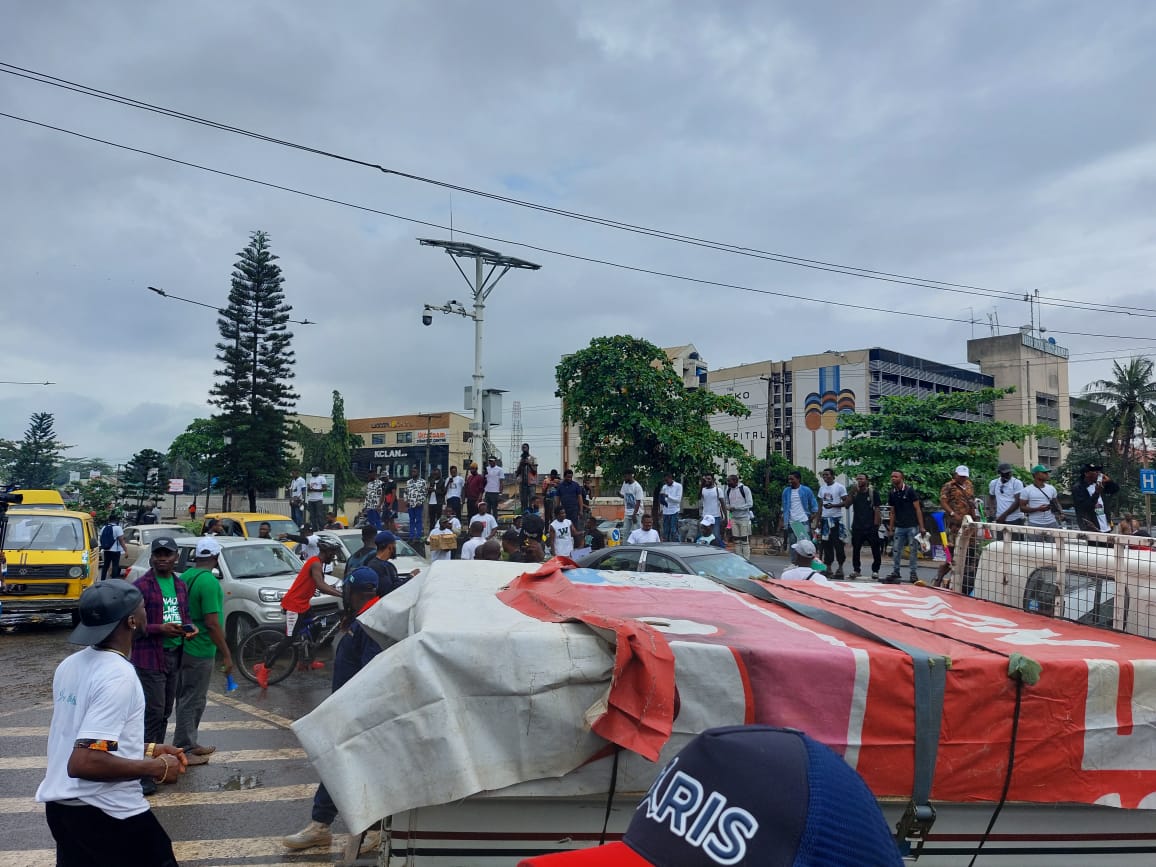 “We are all contesting for presidency through Peter Obi because we have seen that he is the best man for the job.”

Another participant, Simon John, said he believes that things will change under Peter Obi “for good.”

“We are all out here for PeterObiDatti, it is a match for solidarity, freedom, and to liberate everyone in this nation,” he said.

“This march is to say enough of the suffering, we need someone competent, someone who knows how people feel. We are hoping that with Peter Obi, things will change for good. Peter Obi is not Messiah but far better than other people.” 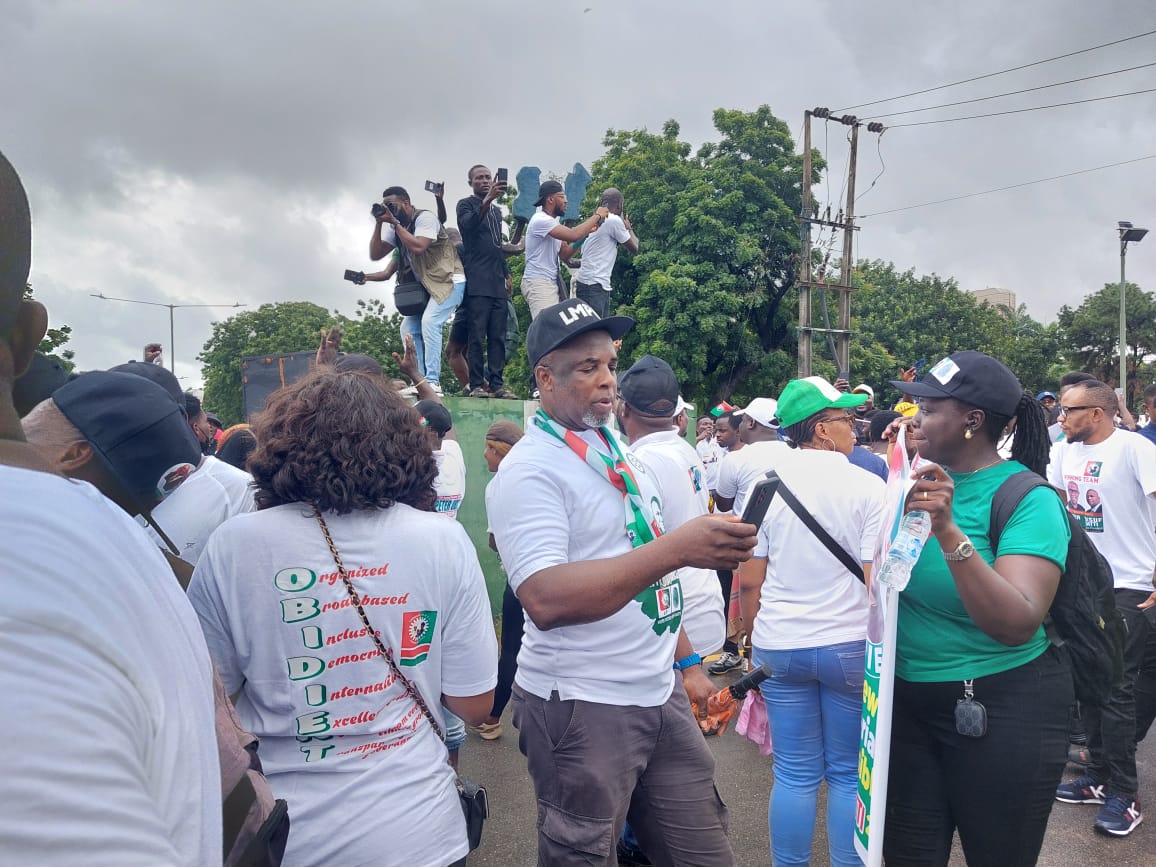 At Lekki, the procession marched from the Marwa bus stop, on the expressway.

Kingsley Azubuike, a participant, said Nigerians are tired of the corruption in government.

“I work abroad, I see things, sometimes I ask myself all these government officials they are coming abroad and see things that are happening, why can’t they make it here?

Mr Azubuike said he is optimistic that the huge turnout for the rally would also be repeated on election day.

“Nobody will leave his house 5 a.m. to come here and on election day won’t vote, it won’t happen.”

Another participant, who declined to say his name, said Nigerians have had enough of poor leadership.

“Before now, people will come out for rallies but on election day you won’t see them,” he said.

“But something is changing in this country, I think we’ve gotten to that precipice where people now say that they need to be involved.

“For the past 60 years a lot of us, including myself, have been armchair participants in this political process. But it has gotten so bad in this country that there are very few people that have been in control of this country and they are taking us to the precipice.

“Until everybody stands up and say enough is enough, that is what I think is happening here.

“I have always voted but I vote and I go home. I have never been involved in all these pre-election… but this one is completely different.”

At Festac Town, the procession, joined by persons living with disabilities, moved from the FHA ground to Apple Junction and Mile 2. 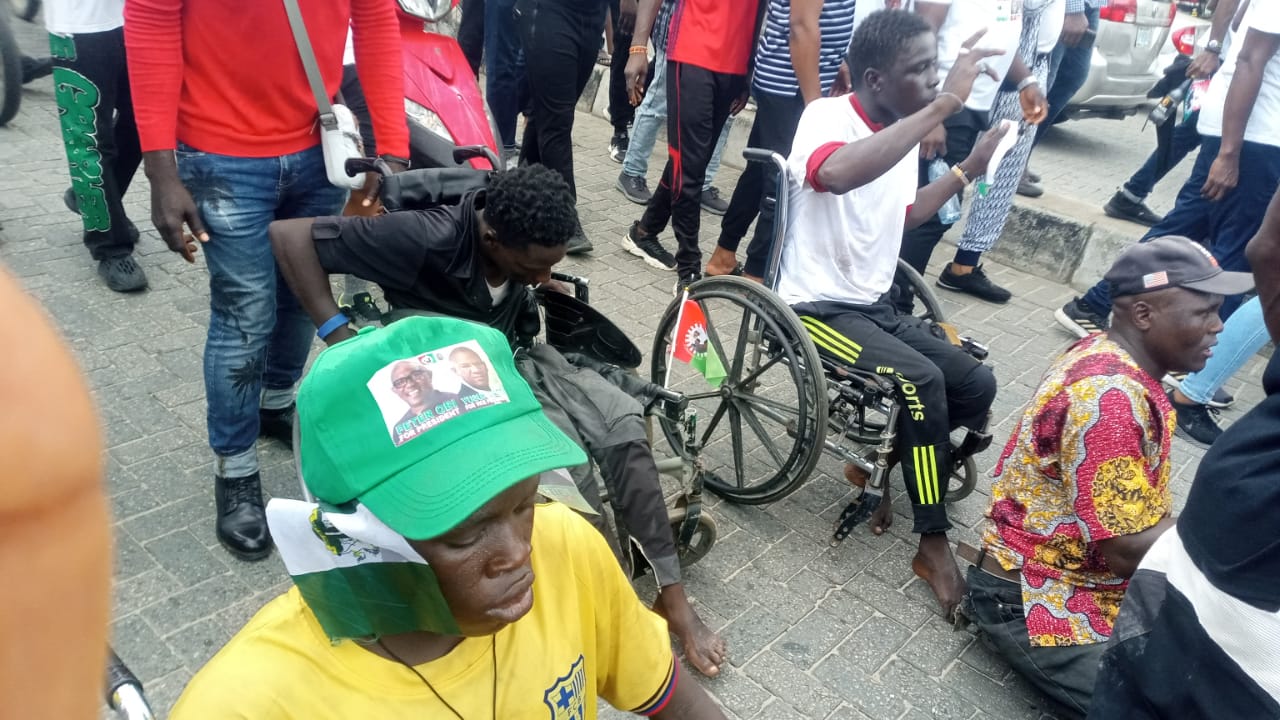 Ahead of the rally, the police made subtle attempts to whip up fears and possibly dissuade the participants.

On Friday night, they shared photos of battle-ready officers manning the tollgate, stating they would not allow any rally at the plaza. This came despite the organisers repeatedly saying they never planned to assemble at the toll plaza. 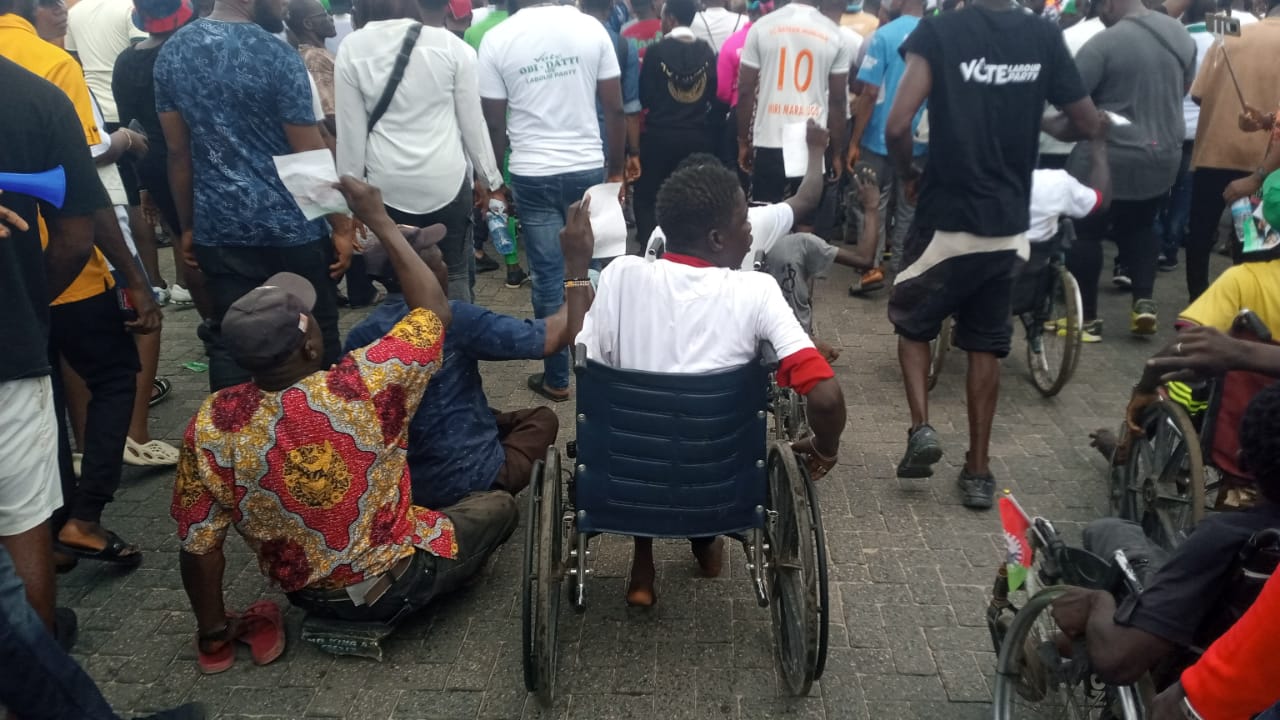 The police spokesperson in Lagos, Benjamin Hundeyin, also replied to a tweet about the routes the march will take, saying “No procession on the expressway. Be guided!”

This is quite a touchy issue. Let me rephrase. Hindering anybody’s fundamental right to freedom of movement will not be allowed. A procession of the magnitude being planned would likely obstruct free flow of traffic. We have a duty to look out for all Nigerians. 🙏🏻🤝

At Ikeja, Orji Ogbonna, one of the organisers of the rally, said security operatives tried to deny them access to the football pitch at Archbishop Vining Church, their planned assemble point.

By 8 a.m., PREMIUM TIMES observed that the security guards of the estate were only opening the gates for cars and other residents stopping participants of the rally from accessing the football pitch.

“We got here very early en masse for our principal, Peter Obi, the security people are saying that we didn’t take permission from the state authority and they are not giving us access,” he said.

“We are very organised, we are not armed, we are here to rally for Peter Obi. We are not here to cause any havoc, just to have a peaceful rally.”

One of the coordinators of the rally, who identified himself simply as Ugochukwu, said they got approval from the police to hold the rally in Ikeja.

“We got the clearance from the police to march today, this match is not organised by LP, it is organised by support groups.

“We have put resources together to organise this and people are ready to match.

Another coordinator, Philip, said “we had received an express approval for Ikeja and moreover we are not Labour Party. This match is organised by the coalition made up of different support groups for Peter Obi and the Vice, Obidatti.”

“All of the expenses are contributed by us. Obidients are not troublemakers, they are not people who want to look for trouble, we are just expressing our desire to see a new nation and a new Nigeria.“