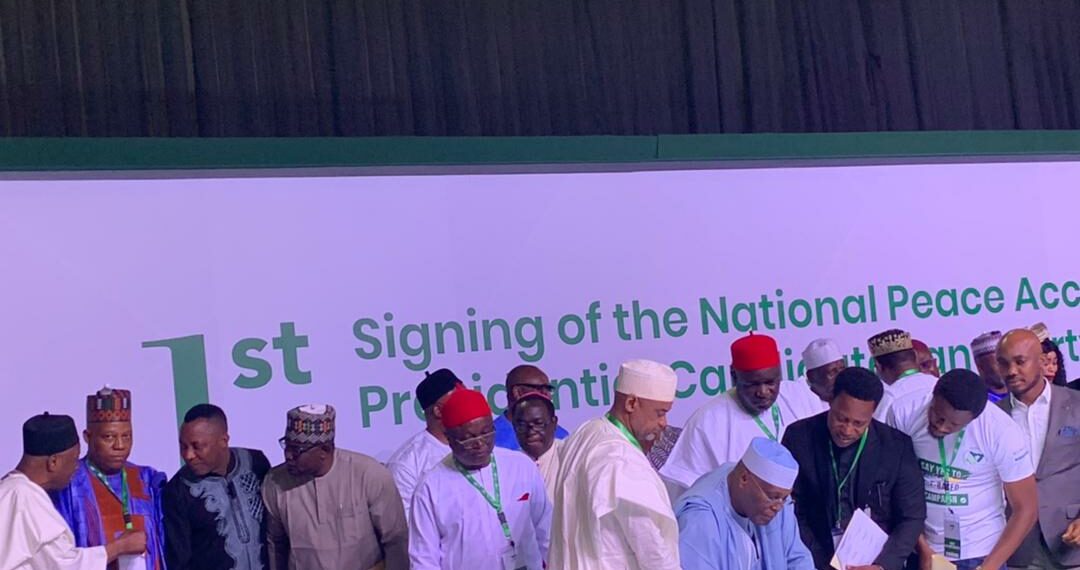 The peace pact was signed by the presidential candidates and the national chairmen of their parties a day after campaigns opened.

Presidential candidates of all political parties have signed a peace accord committing themselves to a peaceful campaign for the 2023 election.

All the candidates and the national chairman chairmen of their parties signed the accord organised by the National Peace Committee in Abuja on Thursday.

Some of the candidates that signed the accord were Atiku Abubakar of the Peoples Democratic Party (PDP), Peter Obi of the Labour Party, and Rabiu Kwankwaso of the New Nigeria Peoples Party (NNPP).

Others were Omoyele Sowore of African Action Congress, Hamzat Al-Mustapha of Action Alliance, Sunday Adenuga of Boot Party and the only female candidate in the race, Chichi Ojei of Allied People’s Movement (APM).

The candidate of the ruling All Progressives Congress (APC), Bola Tinubu, was represented by his running mate, Kashim Shettima.

Mr Tinubu is in the United Kingdom where he is meeting with some support groups.

PREMIUM TIMES had reported that the APC candidate would miss the event.

The 18 recognised political parties are fielding candidates in the 25 February election.

Speaking on behalf of the political parties, the Chairman of the Inter-Party Advisory Council (IPAC), Yabagi Sani, who is also the candidate of ADP, said the candidates are committed to peaceful, free, fair and credible elections.

In his welcome remarks, the Chairman of NPC and former Head of State, Abdulsalami Abubakar, said the candidates must ensure civil and decent campaigns.

“I call on politicians to address issues that are fundamental to Nigerians. We want to promote respect and tolerance of difference. We want to ensure that there is civility and decency in public discourse,” he said. “Therefore, on behalf of Nigerians, I am appealing to all political parties, party chairmen, candidates and their spokespersons, please, a campaign based on issues that are of significant concern to Nigerians.

“Please, avoid the spread of fake news and personal attacks. You must comply with the spirit of electoral laws,” he said.

The signing of the peace agreement came a day after campaigns opened for the presidential and National Assembly elections.