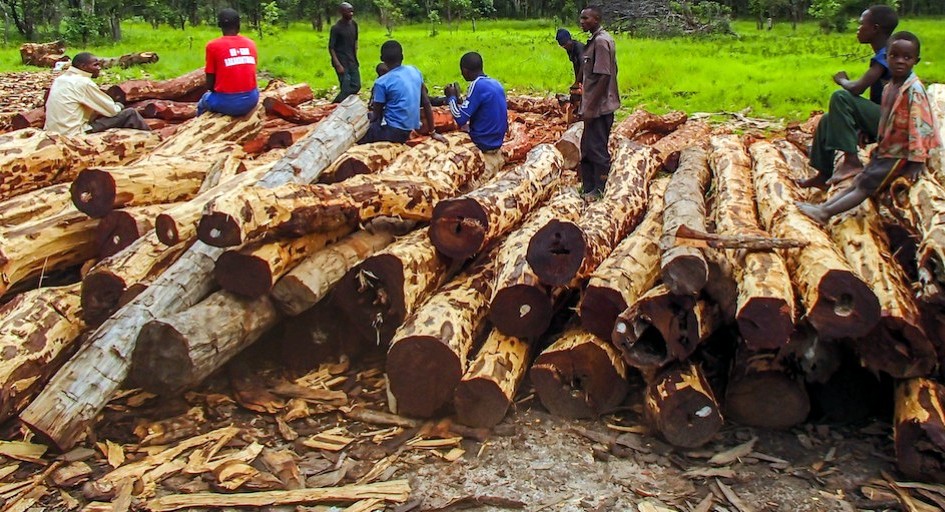 The harvesting of endangered rosewood to make furniture for China’s elite threatens the species with extinction.

African rosewood (mukula) is the world’s most trafficked endangered timber, fuelling a $26 billion market for Ming dynasty-styled furniture and décor for China’s elite. Networks embedded in governments facilitate the illegal movement of this wood from countries such as Madagascar, Malawi, Tanzania and Zambia through the ports of Mombasa and Dar es Salaam to China.

African rosewood is a tropical timber found mainly in Madagascar, Zambia and the Democratic Republic of the Congo. It is essential for local ecosystems and biodiversity and, when harvested sustainably, supports local livelihoods. The wood is also used in traditional medicine. Over the years, demand for this rare timber in other countries has risen and now threatens its existence.

In December 2021, the Land and Environment Court in Mombasa ordered the Kenya Revenue Authority to surrender 646 metric tonnes of rosewood worth $13 million to alleged traffickers. The timber had been seized at the Port of Mombasa while in transit from Madagascar through Zanzibar to Hong Kong.

The Kenyan court agreed with the alleged traffickers that the Convention on International Trade in Endangered Species of Wild Flora and Fauna (CITES) regulation restricting rosewood trade was not in effect in 2014. This was the year the timber was seized by Kenya’s wildlife and forest services, and the revenue authority.

The ruling was made even though Madagascar’s law prohibited the trade in rosewood, and the transhipment of the timber through Mombasa’s port violated Kenya’s 2013 Wildlife Conservation and Management Act.

A CITES advisory, presented as expert opinion during the proceedings, maintained that the rosewood seized in Kenya had been illegally exported from Madagascar and was being traded in contravention of Appendix II. However, the Kenyan court still released the trafficked rosewood to the Chinese company that had brought it from Madagascar.

The networks that facilitate the trafficking of this endangered species include high-level government officials. Investigative reports by civil society organisations in Madagascar indicate that corruption enables the harvesting of rosewood despite laws in line with CITES that protect it.

The Environmental Investigation Agency (EIA) in Madagascar says rosewood trafficking in the country is enabled through the state protection of traffickers. Malagasy environmental activist Armand Marozafy was jailed for defamation in 2015 for posting information about two local businessmen involved in the illegal harvesting of the timber.

An EIA report reveals how rosewood logs marked with ‘paintings’ that indicate they came from government stockpiles were loaded onto vessels bound for Mombasa in 2014. The vessels docked in Zanzibar instead, where smugglers used offshore transit boats to shuttle the rosewood into shipping containers. The containers were put on legitimate ships destined for Hong Kong, then transhipped to other destinations such as Mombasa to mask their place of origin.

The EIA also estimates that 50 40-foot containers of rosewood were exported from Zambia to China between June 2017 and May 2019. The harvesting, transportation and shipment of the timber in these 50 containers is estimated to have cost the traffickers $7.5 million in bribes and informal fees. The report says prominent people in the government of Edgar Lungu, the former president of Zambia, and his family members were part of this ‘mukula cartel’.

Enforcing laws banning the transport, transhipment and shipping of illicit rosewood through ports in Mombasa, Zanzibar and Dar es Salaam could curb the smuggling from Zambia and Madagascar to Hong Kong and China. These regulations include the East African Community Customs Management Act, which outlaws the falsification of documents at port and border points. Enforcing this law is critical given that rosewood shipped through East African ports is declared simply as ‘wood’, enabling its smuggling to China.

Sixteen West African states have recently banned rosewood trading. Similar government bans in East and Southern Africa could help save this valuable wood. A regional approach would stem the involvement of corrupt government officials in trafficking from source countries through transit countries such as Kenya and Tanzania. This approach would also enable effective policies to protect endangered rosewood in East and Southern Africa from smuggling.

As a first step, the Protocol on Wildlife Conservation and Law Enforcement in Southern Africa should be amended to enable the setting up of specialised CITES units at land and sea ports in the region. These units would help identify rosewood and minimise opportunities for it to be smuggled.

This article was produced by ENACT. ENACT is funded by the European Union and implemented by the Institute for Security Studies and INTERPOL, in affiliation with the Global Initiative against Transnational Organised Crime.