"There are emergency situations that I would not know what to do because there is nothing to help patients inside the clinic. Any labouring pregnant patient that comes used to bring oxytocin, pad, cotton wool, spirit, and toilet roll before we could help them deliver a baby."

The New Year of 2022 arrived with death for the Boladejis. On that day, Tawa Boladeji was taking her five-year-old to the hospital in Ede, Osun State. The child never made it to the hospital.

Two months later, death struck again in the family. This time, it was Mrs Boladeji’s 11-year-old who complained of fever.

“I was rushing them to the hospital in Ede when they died,” recalled Mrs Boladeji, 27, a mother of three and an inhabitant of Agbinpa village in the Ede South Local Government Area, Osun State.

Other inhabitants, like Mrs Boladeji, would rather make the long trip to Ede to get medical help than visit the Agbinpa Health Centre, the primary health clinic in the village.

Agbinpa Health Centre is the only clinic in the village serving over 100 inhabitants, mostly farmers. It had become infamous within the community for allegedly causing the death of several children. So, for the inhabitants, getting treatment there is no longer an option. “There is nothing in the centre, that is where I used to take them to for treatment before but rather than getting better, their health was getting worse,” Mrs Boladeji said.

Nigeria is the highest contributor to under-five deaths in the world, according to a 2020 report by UNICEF, overtaking India to achieve the unenviable feat.

Aside from the poor medical treatment administered to children taken to Agbinpa Health Centre, women who are in labour are made to birth their babies on a mat spread in the open, outside the clinic. Afterwards, a piece of cloth would be used to wipe off the blood on the map and floor.

And, because the clinic is always out of drugs, patients and new mothers have to wait for a drug salesman known as Brother Lamidi before they could buy their prescribed medications.

A nurse in charge of the health centre admitted the clinic’s infamy and blamed it on the lack of support from the government.

“If you check everywhere, you cannot find any medicine because we do not have it. The local government people do not provide it for us. What I used to tell my patients is that they should get whatever they need from the chemist or elsewhere before coming,” the nurse said.

“There are emergency situations that I would not know what to do because there is nothing to help patients inside the clinic. Any labouring pregnant patient that comes used to bring oxytocin, pad, cotton wool, spirit, and toilet roll before we could help them deliver a baby.

“Some years back, the local government used to give us two oxytocin every month that we use for pregnant women, we were even complaining that it is too small because we used to have many pregnant women, we never knew they would eventually stop the distribution.” Like Mrs Boladeji, another inhabitant who identified herself as Mummy Samad said she also lost her three-year-old son while taking him to the hospital outside the village.

Her son died of malaria.

“We are appealing to the government to help us resuscitate our health centre. Labouring mothers used to deliver outside, whenever we visit there for treatment we used to sit outside because it usually smells. Bats have defecated everywhere.”

According to Akinwande David, the Baale of Agbinpa village, at least five children and “many elderly ones” died in the community between January and May.

He added that there had been “too many deaths” in the past years.

Mr David blamed the deaths on unprofessional medical services and lack of facilities in the only available medical centre in the village.

“We do not have access to good treatment in the medical centre even when we get injured on the farm, there is nothing there as first aid to help us,” he said.

“Children and elderly ones too are not exempted in this condition. The hospital is not useful, nothing is there, let me even say we do not have it because it is useless”.

A professor of Medical Laboratory Science, Oladele Hassan, said the practice of women giving birth on a mat in the open is condemnable.

“It is not good, I am not happy to hear what you are asking because the government is supposed to provide the facilities, the nurse might be doing that because there is no bed in the hospital,” he said.

“Maybe when they hear it from the news, they will know it is their responsibility. It is just unfortunate.”

When contacted over the phone, in the course of this report, Rafiu Isamotu, the Osun State Commissioner for Health, asked our reporter to come to his office on a fixed date.

When this reporter arrived at the office on the date, the commissioner was not in his office.

He did not respond to subsequent phone calls and text messages.

The situation is not different in the nearby Ogun State where residents of Ode-Omi, a community in the Ogun waterside area of the state, have no access to basic health care.

During a recent visit to the community, Tolani Olatunji sat outside her home and stared into the distance.

One month ago, she lost her child, Orelope, to an “unknown” ailment because there was no doctor to treat him at the primary health centre.

Mrs Olatunji said her son suffered from an ailment that made him faint, from birth; but it became worse when he was two years old.

She gave birth to the boy in 2018 at a trado-medical centre in the community. At birth, Orelope looked pale and skinny and, according to the mother, frequently had seizures.

Their repeated visits to the trado-medical centres in the community yielded no results.

“Orelope is my only child. My husband and I were married for three years before I was able to give birth to him. We accepted fate and took him as our only child,” said Mrs Olatunji, 33.

“He was my joy and happiness, but death took him away suddenly.”

Mrs Olatunji said she would not have patronised a traditional medicine centre if the community’s health centre was functional.

To access the nearest functional health centre, the Ibiade General Hospital, residents of Ode-Omi have to travel by boat to Makun, a one-hour journey on the water. The next leg of the journey is another two hours by boat or 40 minutes on a commercial motorcycle to the hospital.

Tajudeen Adeola, a boat operator, said he had had numerous experiences over the past two years transporting pregnant women heading to the general hospital from Ode-Omi.

Although many of the residents patronise traditional medicine, Mr Adeola explained that pregnant women usually resort to going to Ibiade General Hospital when they have complications during childbirth.

“We always take them through canoe to Ibiade General Hospital which is about three hours from the community. Many people have lost their lives before getting to the hospital”, he said.

Adebukunola Ajayi, a resident of Ode-Omi, recalled her experience while she was about to give birth to her second child.

She said she never knew she was lucky having had her first child in Lagos while on a visit to a relative.

“When it was time to deliver my second child, I went through hell because I almost died.”

On her delivery day, Ms Ajayi said she went into labour around 3:30 a.m. but was rushed to a health centre in Makun community from where she was asked to go to the General Hospital.

She said her condition, however, became worse when she could not find a boat to take her to Ibiade.

“At the time we eventually got to the hospital I was already ‘gone’”, she said.

“In fact, my relatives and friend already thought I was dead but my sister told me that a doctor who was visiting a friend in that hospital touched my wrist and told them that I am not dead and that they should hurriedly get a doctor in the hospital.

“In the long run, they couldn’t get a doctor it was that man (visiting medical doctor) who revived me in a ward at the hospital and no medical practitioner asked what was going on. I still have his number because my family took his number and I called to thank him after I was stable three days later.”

In addition to being the highest contributor to under-five mortality globally, Nigeria also has one of the highest maternal mortality rates (MMR) in the world, according to the World Bank, reaching as high as 821 per 100,000 live births.

Nigerian Demographic and Health Survey (NDHS) reports for 2008 and 2013 revealed that Nigeria achieved practically no reduction in MMR.

A visit to the Ode-Omi Primary Health Care Centre showed why the villagers would rather not patronise it.

The building is dilapidated: the roof is peeling off, windows are broken, beds are old and rusty, and the wooden benches are ants-infested.

When this reporter visited the centre, it was empty. However, after about two hours, an auxiliary nurse, named Ms Yunus, was seen at the facility.

Ms Yunus said the facility does not have a midwife, so pregnant women do not come there.

Adekunle Hassan, the traditional ruler of Ode-Omi, said the lack of access to basic health care in the community has brought hardship to the people

”It would have been better if there were more health centres which will pay good attention to maternity and dispensing of drugs against what we have at the moment,” he said.

“But above all that, it will not be enough if we don’t have doctors and it’s not even a standard hospital to start with, just health centres. The current situation there is that a lot of patients with no doctor to attend to them.” 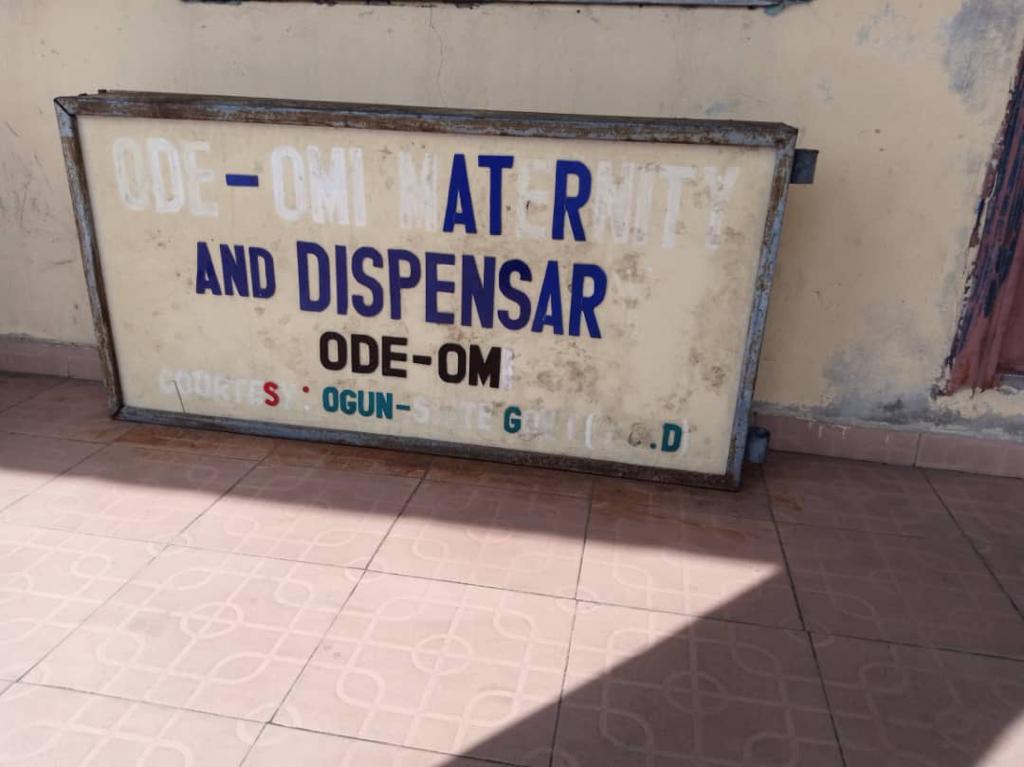 Mr Hassan said the community’s leaders have tried to provide “important things” at the health centre – foams and mattresses for the maternity ward.

“Also there are some emergency situations that some patients would need to be rushed to a nearby hospital but there’s little we can do, there are times we use boat to transport them but now we have a vehicle in that area,” he said.

After losing her two children, Mrs Boladeji is left with a three-year-old son. She said she has no plans of leaving the village for a better life elsewhere.

“I cannot leave this village because this is my husband’s house,” she said.

“I gave birth to all my children in this village. I have farms that I am managing in the village. The only thing is that I will continue to use herbs and whenever the problem gets worse I will rush him to the nearest hospital.”

As of the time of filing this report, all efforts made to speak with the state’s commissioner for health, Tomi Coker, on the deplorable condition of the health centre failed as she neither picked up calls nor responded to a text from our reporter seeking her comment.

Also, she was not also available the day our reporter visited her office on the issue.