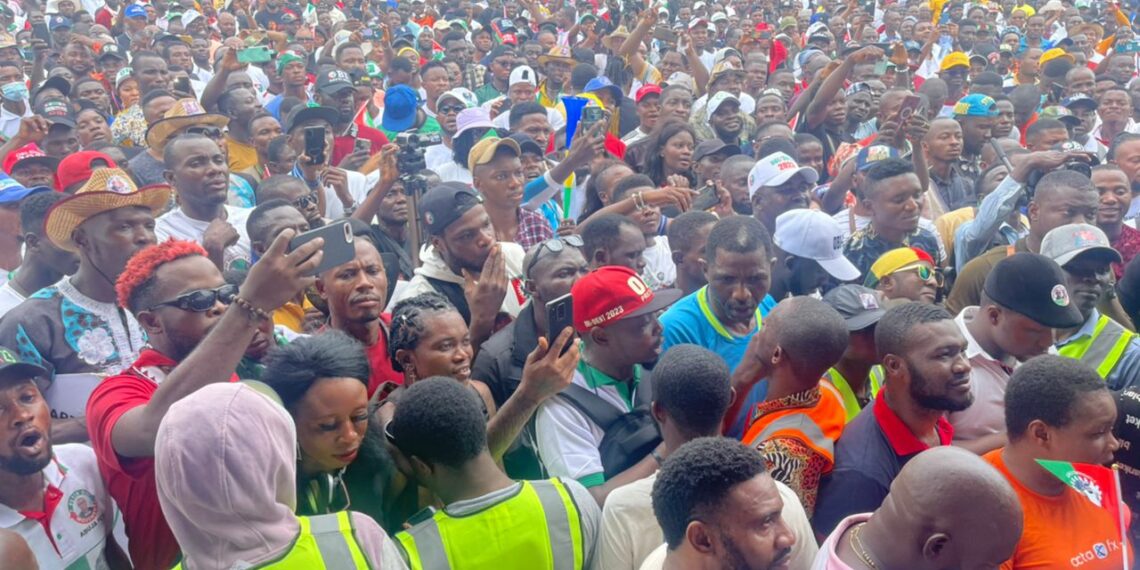 Peter Obi’s supporters during the Abuja march on Saturday.

As the campaigns for the 2023 presidential election begin on Wednesday, some of the major candidates are still trying to unite their parties behind their bids

The sights and sounds of Africa’s largest multi-party democracy will be on full display from Wednesday when six months of campaigns for the 2023 General Election formally begin across Nigeria.

All the 18 registered political parties have candidates for the presidential election scheduled for February 25. But the media have earmarked only three of the opposition candidates as serious challengers to the standard bearer of the ruling All Progressives Congress (APC), Bola Tinubu. Of the three, Atiku Abubakar of the main opposition Peoples Democratic Party (PDP) is grappling with a crack in his own party, while the other two, Peter Obi of the Labour Party and Rabiu Kwankwaso of the New Nigerian People’s Party (NNPP) are running for the first time and on the tickets of parties that had never made a mark in a presidential poll.

The APC on Saturday published the list of its 422-member presidential campaign council with President Muhammadu Buhari as chairman, Plateau State Governor Simon Lalong as director-general and a member of the House of Representatives, James Faleke, as secretary.

In the council, which will be inaugurated on Monday at the party’s secretariat in Abuja, serving and former state governors of the party, ministers, federal lawmakers, former presidential aspirants and almost all other prominent members of the party are assigned various roles, conveying the message that the ruling party is going into the election united.

Although the list also contains odd names such as that of a former governor of Enugu State, Chimaroke Nnamani, who is a serving PDP senator, the absence of Vice President Yemi Osinbajo was immediately conspicuous. The spokesperson of the council, Festus Keyamo, later issued a statement explaining that President Buhari asked for the exclusion of Mr Osinbajo and the Secretary to the Government of the Federation, Boss Mustapha, from the campaigns to allow them to concentrate on governance in the six months leading to the elections.

But many suspect the two men would not have been comfortable canvassing for Mr Tinubu due to his refusal to pick a Christian as his running mate. Some northern Christian leaders of the party such as a former Speaker of the House of Representatives, Yakubu Dogara, and Mr Mustapha’s predecessor, Babachir Lawal, have launched a rebel campaign against Mr Tinubu’s election over the issue. Mr Mustapha, who is a Christian from Adamawa State, has not openly associated with that rebellion. But he and the vice president as the most senior Christians in the Buhari administration are thought to be sympathetic to it. The controversy will dog Mr Tinubu throughout the campaigns and beyond as the issue is regarded as one of the biggest odds against his election.

But there is more than that to it, in the case of Mr Osinbajo. His relationship with his former boss in Lagos was damaged by their rivalry in the presidential primary of the party earlier this year, with some supporters of Mr Tinubu branding the vice president a “Judas” for joining the race months after Mr Tinubu had done so. Mr Osinbajo served as the attorney-general and commissioner for justice throughout the eight years that Mr Tinubu was governor of Lagos State. His belonging to Mr Tinubu’s political family was instrumental to his appointment in 2014 as the running mate to Mr Buhari. Both men met after the primary to mend their fence but the scars of that combat remain fresh.

Atiku moving on without Wike

Atiku has finally accepted the fate he appeared to dread most after winning the PDP primary at the end of May. He has failed in his effort to unify the party and the opposition behind his presidential bid. This is best captured by his inability to pacify Rivers State Governor Nyesom Wike, whom he had beaten in controversial circumstances at the primary.

Since Atiku announced the governor of the neighbouring Delta State, Ifeanyi Okowa, as his running mate, Mr Wike has engaged the candidate and their party leadership in a political chess game. Atiku spent precious weeks trying to pull Mr Wike from his shell while being reluctant to consider the sole condition the governor gave for peace and cooperation. Mr Wike wants the national chairman to step down, ostensibly to allow the party to appoint his replacement from a southern zone but also as a punishment for allegedly bending party rules to help Atiku secure the ticket.

The rift between the two men delayed the composition of the presidential campaign council of the main opposition party as Atiku realised the danger of not having the support of the governor of one of the richest and most populous states in the party’s stronghold. But after getting weary of waiting for Mr Wike and the dissident group that had coalesced around him to yield to pleas, the party penultimate Thursday released the list of the campaign council, assigning Mr Wike and his supporters fringe roles.

The council has Akwa Ibom Governor Udom Emmanuel as chairman and Oyo State Governor Seyi Makinde and Bauchi State Governor Bala Mohammed as his deputies. But the strategic position of director-general of the council went to Sokoto Governor Aminu Tambuwal, another person who had riled Mr Wike at the primary. Mr Tambuwal announced his withdrawal from the contest and endorsement of Atiku just before voting got underway at the convention, a development believed to have swung the contest for Atiku who went on to beat Mr Wike 371 to 237 votes.

Last week, the Wike camp, which includes Governors Makinde of Oyo, Samuel Ortom of Benue, Okezie Ikpeazu of Abia and Enugu Governor Ifeanyi Ugwuanyi, withdrew from the council. Mr Wike later clarified that they were not leaving the PDP but would not support Atiku in the presidential election.

Atiku has made it a campaign slogan to unify Nigeria and bridge the divisions caused by President Buhari’s alleged clannishness. The events of the last four months in his party must have shown him how arduous that task could be if he succeeds Mr Buhari next year.

Unlike the APC and PDP, the Labour Party has either not put together a presidential campaign council or has not made a ceremony out of announcing it. But that does not appear to affect the activities of Mr Obi’s supporters. Although the campaigns are scheduled to begin on Wednesday based on the timetable for the elections published by the electoral commission, the Obidients have for weeks been running their own. They have held so-called million-man marches in several states across Nigeria, drawing large crowds in cities such as Port Harcourt, Jos, Owerri and Abuja. In at least two states, local authorities sent the police to disperse them.

The Labour Party is still thin on the ground in terms of the physical structure and party membership. Most of those behind its activities online and in the street marches so far held are volunteers whose interest lies only in the presidential bid of the former Anambra State governor. They have not been campaigning for other candidates of the party down the ballot.

Mr Obi has described his party’s lack of structure as an asset for his presidential bid, saying people at the grassroots have taken ownership of the bid. Observers are waiting to see how this would help or hurt him on election day.

The seeming spontaneity of the street marches demonstrates the enthusiasm of his supporters. But it is also confounding observers about the form a potential Obi presidency would take. The image that we see of Mr Obi is that of a lone ranger. He joined and pulled out of the PDP almost alone. He also remains the only popular face in the Obi movement. He appears to disdain the company of politicians and stays far above and remote from the rabble of supporters chanting down his opponents.

While the major parties’ candidates will appear at grand rallies organised by the parties, it appears Mr Obi’s rallies will be organised by the supporters who may not even need his speech or that of any party leader to galvanise them.

A major feature of this election is that the opposition has again weakened through fragmentation, a development that has taken us back to the years before the landmark opposition victory of 2015.

This is the main reason the Economist Intelligence Unit (EIU), the research and analysis division of the London-based Economist Group, cited for its prediction that Mr Tinubu will win this election. In a report published last week, the EIU said the chances of Atiku, who gave President Muhammadu Buhari a stiff challenge in 2019, have been significantly reduced by the internal crisis in his party and the growing popularity of Mr Obi in the South-east, a region that had been a stronghold of the PDP.

“We expect Tinubu to take the presidency, and recent developments have only reinforced our thinking. It does not appear that a Muslim-Muslim ticket will weigh significantly on Tinubu’s electoral chances.

“Atiku has more cause to worry. Not only is Obi eating into the PDP’s South-eastern support base, but Governor Wike, who finished second in the primary, does not appear to be interested in endorsing him,” the EIU said.

The PDP vice presidential candidate, Governor Ifeanyi Okowa of Delta State, and a former caretaker chairman of the party, former Kaduna State Governor Ahmed Makarfi, had earlier noted that Messrs Obi and Kwankwaso have no pathway to victory but their voters may inadvertently hand APC the election.

Aside from the South-east, Mr Obi is also pitching for the votes of Christians in other parts of the country who are angry with the same-faith ticket of the APC. Speaking at a political meeting two weeks ago, Mr Okowa said, “So what will happen automatically is that what Nigerians and the Church are trying to avoid, they may just end up finding themselves in it because they are accidentally creating a pathway for APC.”