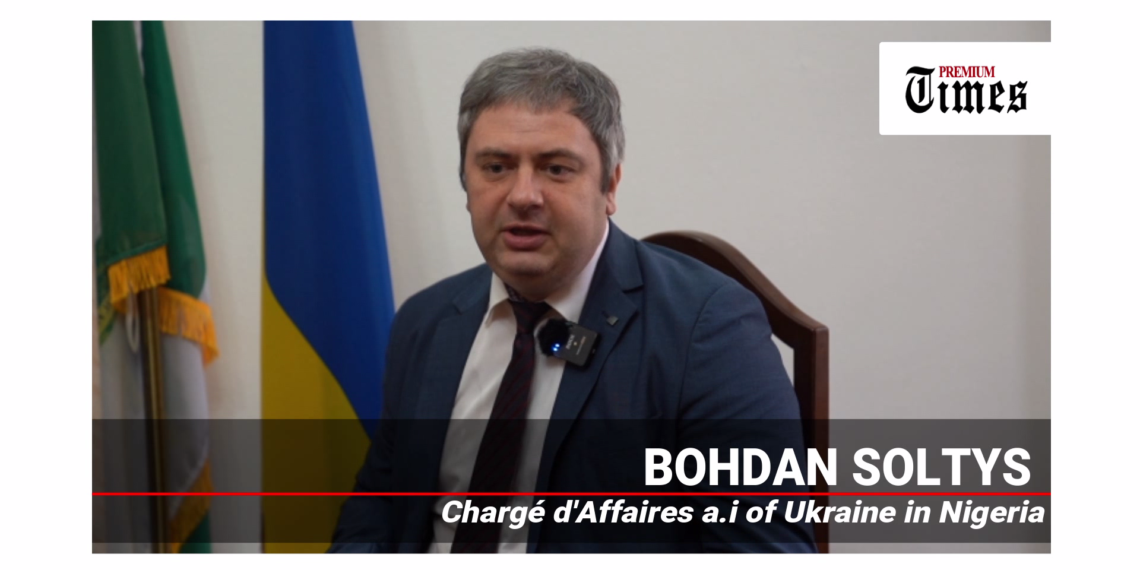 Bohdan Soltys, Charge d'Affaires a.i of Ukraine in Nigeria speaking during an interview with PREMIUM TIMES in Abuja

Ukrainian envoy in Nigeria, Bohdan Soltys, says the world should isolate Russia to show their disapproval of war of aggression.

Ukraine’s chargé d’affaires in Nigeria, Bohdan Soltys, said the only way to end the ongoing war between his country and Russia is for Russian troops to go back home.

In an exclusive interview with PREMIUM TIMES, the envoy talks about the Russian aggression, noting that Ukraine’s desire to join NATO is for protection against aggression such as it is facing from Russia.

Mr Soltys also talks about how Ukraine would want the world to react to Russia.

PT: How long have you been in Nigeria?

Mr Soltys: I have been in Nigeria for almost three years, working here at the embassy. This is an interesting country. I like the warm climate, I really like it. I am from a cold country but I do not like the cold.

PT: Why did Russia attack Ukraine?

Mr Soltys: First of all, I will like to say that Russia has been giving a lot of different reasons, like saying there are biological weapons in Ukraine which America plans to attack Russia with.

I would like to draw your attention to some articles printed in Russian newspapers and also here in Nigeria, Russia was also saying there are six biological American laboratories in Nigeria…

Russia wants to restore the evil empire of the Soviet Union. Russia sees Ukraine as an essential part of this evil empire and this is what this war is about. Russia has imperial ambitions; you know Putin once compared himself to Russian King Peter The Great in one of his speeches.

The Russian leader has this ambition to be seen as the person who collects Russian lands, a person who increases the empire. This is all it is about.

In 2014, we had a president who was pro-Russian and wanted to be with Russia. But after him, we had another leader who started moving us towards the European Union because we want to join the club of civilised countries and not some dictatorship. And when Russia saw that Ukraine was moving away from it and that it was losing control of Ukraine, it started to war, first by annexation of Crimea and occupying parts of Donetsk and Luhansk regions and then Russia started full-scale war in February.

PT: During the sovereignty declaration in 1990, Ukraine stated that it will permanently remain a neutral region. At what point did that change and why is it important for you to join NATO?

Mr Soltys: It is up to Ukraine to decide if they want to belong to some union or not. NATO is a defence organisation and this war that Russia launched shows very well why – having such an aggressive neighbour- we need to join some defensive union.

PT: So it is strictly for defence purposes you need to join NATO?

PT: Can you quickly speak to the opinion held by Russians and others that Ukraine joining NATO is bringing the US to spy on them (Russia)?

Mr Soltys: I would like to remind you that if you look at the map of the world, you will see that Russia shares a border in the east with the United States. From this, Russia is already a very close neighbour to the US. Also Russia borders a lot of other NATO countries. Ukraine joining NATO does not change anything from the point of view of Russia’s neighbourhood with NATO.

PT: Ukraine enjoys evident support from the West in terms of funds and condemnation of Russia’s attack. How do you see Africa’s disenchantment with the West which did not react the same way to aggression in Libya and Palestine?

Mr Soltys: I would like to limit my position to the situation in Ukraine. Basically, this war is not just the problem of Ukraine, this war actually affects the whole world. As we observed, the blockade of the Ukrainian grain put a lot of countries in the world on the verge of hunger.

Secondly, Russian action on the Ukrainian nuclear power plant threatens the entire world because you know in 1986 there was a nuclear disaster at the Chernobyl nuclear power plant in Ukraine which polluted a lot of the world and created health problems which led to deaths.

And now Russia’s shelling of the Zaporizhia nuclear power plant puts the entire world on the verge of a nuclear catastrophe. So this is not just Ukraine’s problem but this conflict affects everybody.

Also, an important point I want to make is that if Russia succeeds in its war against Ukraine, then it would have created a very dangerous precedent because any other country can think, if Russia gets away with it, then I can also occupy any country.

It is a very dangerous situation capable of destroying the world order.

PT: Do you not see the same thing happening in Palestine with Israel? Are they not at risk of being consumed or conquered by Israel?

Mr Soltys: The situation in Palestine and Ukraine are two different situations and I will not compare them.

PT: In his attempt to broker peace, Turkey’s President Erdogan said Ukraine cannot win the war and also that Washington has the security Russia needs. Another school of thought believes that Ukraine is just a pun in a war between Russia and the US. How do you feel about these?

Mr Soltys: As I already said, the real motivation behind this war is to restore the Soviet Union for which they just want to occupy the entire territory of Ukraine. For those who say Russia is fighting America in Ukraine, they just need to look at the map and see that America is in a different place.

All this Russian propaganda that they are fighting NATO is totally ridiculous, Russia attacked Ukraine only because it wants to occupy its territory.

PT: Have you had any conversations with your Russian counterpart in Nigeria?

PT: Why is that so? Because the war is not in Nigeria?

Mr Soltys: First of all, there were some negotiations at the beginning of the war but they were totally fruitless because Russia’s goal is to occupy the entire Ukraine and if Russia wanted peace, all they need to do is to turn around and go home…

Russia can stop this war at any time but for Ukraine, we have no choice…

PT: How does Ukraine interpret what appears to be reluctance on the side of Africa as compared to the West?

Mr Soltys: Just recently, the Nigerian Ministry of Foreign Affairs held a conference themed “Contending Options for Africa in the face of super power hostilities – A case study of Russo Ukrainian Conflict” and the Nigerian Minister of State for Foreign Affairs who said that international organisations abstain from voting on resolutions against Russia because we want peace and they believe that their neutrality promotes peace.

This is how many African governments express their position. I want to say that if you do not condemn the evil, you do not call what is black, black then you create a very bad precedent because you never know – the next time some other country will decide to attack Nigeria also and everybody will close their eyes saying we are neutral and we want peace.

PT: So for you, neutrality is not exactly a response?

PT: What is the future of Africa-Ukraine relations especially in the wake of the contest for Africa by China, Russia, US and the EU?

PT: How do you rate Nigeria’s stance so far? What would you like to see Nigeria do differently?

Mr Soltys: First of all, voting against Russia at any of the UN resolutions; stopping any cooperation with Russia. You know, the world should boycott Russia to show that they disapprove of Russia’s aggression against Ukraine.

PT: So you would expect that Nigeria boycotts Russia at this point?

PT: Do you think that will be an easy move, especially because Nigeria is non-aligned?

Mr Soltys: Well, nothing in this life is easy but as I said, this war creates a very dangerous precedent. If Russia gets away with this in Ukraine, then who will be the next victim and to whom, maybe not Russia but Nigeria could also be a victim.

PT: About grains in Ukraine, there was a blockade until the UN and other parties brokered an agreement for the movement. Do you have any fear that the blockade may happen again?

Western leaders were warning us; the American president announced the war would start 16 February but nobody could believe that because the idea of war seemed so ridiculous. This war is not just bad for Ukrainians but also bad for the Russian population.

PT: Apparently, there are a lot of ties between Ukraine and Russia. In Eastern Ukraine, you have a lot of people speaking Russian; how long will it take Ukraine to wean itself off Russia?

Mr Soltys: I want to say that this process is going on right now. As for the language, it is true that a lot of people in Eastern Ukraine speak Russian but now a lot of people who are Russian speakers I know have switched to Ukraine. They do not want to speak the language of the aggressor anymore.

You know actually, Russia’s war did very much to push Ukraine from Russia. It is a very effective anti-Russia move by Russia because now people understand that Russia only brings death and destruction. People want to be members of civilised countries, members of the European Union, members of European family of countries, countries who respect each other, respect human rights, peace-loving countries.

PT: In essence, you are saying the war could also be seen as some sort of blessing?

Mr Soltys: You know the proverb that says every cloud has a silver lining, so I think this is the situation. But given the amount of people suffering and dying, I cannot use the word blessing in this case.

PT: What will you propose to end the war?

Mr Soltys: Well, the only solution that I see for the war to end is for Russia to go home. Russian soldiers should turn away on their own side of the border and go back home and live peacefully and happily ever after. This is the only possible solution because what kind of peace can you speak about if Russia wants to keep fighting and killing? The Russian people should understand that this war does not do any good to them; they should refuse to go to fight and kill innocent people.

PT: Again, I want to bring back the question about your Russian counterpart in Nigeria. Do you think both of you can have some conversations that could reflect on what is going on in Europe?

Mr Soltys: I do not see how that will help the situation.