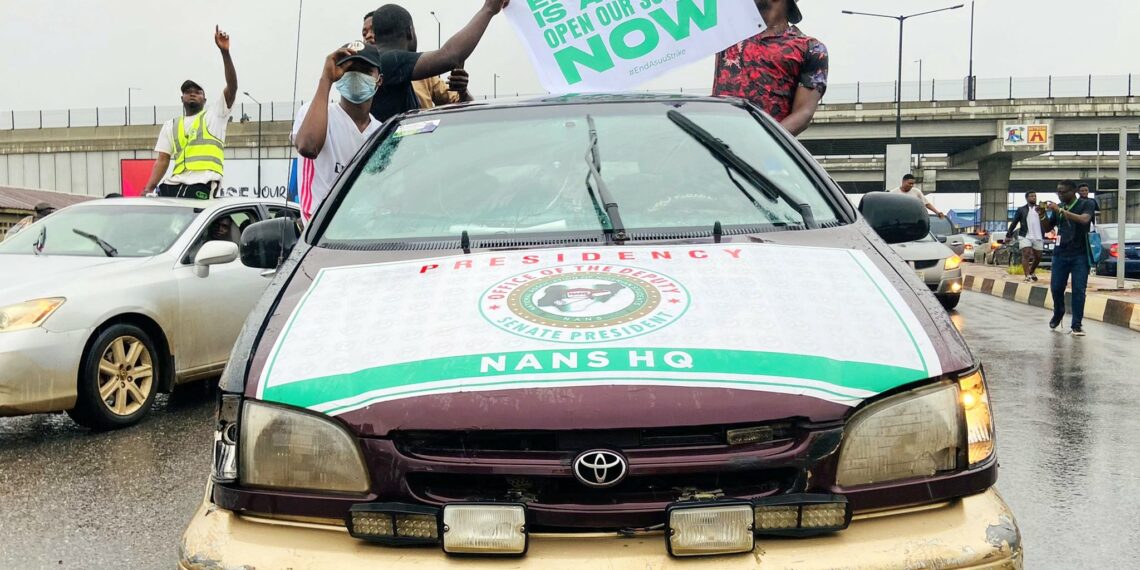 Some members of NANS in the South-west region had, on Thursday staged a similar protest on the Gbongan-Ibadan highway in Osun State, causing gridlock.

Many commuters, including those travelling abroad through the Murtala Muhammed International Airport (MMIA), Lagos, were on Monday morning stranded as students, in their tens, blocked the main road linking the airport to Ikeja and Apapa-Osodi areas of the city.

On guard at the scene of the protest are also police officers who wielded batons but maintained some distance from the protesters as they tried to ensure that the situation did not degenerate.

The protesters, under the umbrella of the National Association of Nigerian Students (NANS) have vowed to remain on the road until the Nigerian government and the striking Academic Staff Union of Universities (ASUU) reach a middle ground and academic activities resume on their campuses.

It is already more than seven months that ASUU commenced its strike, which it has declared indefinite following the failure of the two parties to reach a compromise on the union’s demands.

ASUU has demanded the replacement of the Integrated Payroll and Personnel Information System (IPPIS) as salary payment platform with the University Transparency and Accountability Solution (UTAS) which its members developed.

ASUU said rather than ensuring accountability, IPPIS has enabled fraud in the system and that it failed to accommodate the peculiarities of the university system.

The union is also requesting the release of revitilisation fund for the universities as contained in the earlier agreements signed with the government, and the release of its members-earned academic allowance, among others.

The protesters defied the early morning rain in Lagos on Monday and assembled on the main road leading to the airport and just after the toll gates.

They used their vehicles to barricade the road obstructing those driving towards the airport.

Many workers and travellers were forced to trek long distances to access the airport as the protesters continued to sing and dance in circles while officers of the Rapid Response Squad (RRS) of the Nigerian Police in the state were seen seen on standby in one of the videos of the protest posted on Twitter.

The protesters carried placards with various inscriptions such as; “No Work, No Pay is a Fascist Talk. Pay Our Lecturers” and “No Education, No Movement”.

Some members of NANS in the South-west region had on Thursday staged a similar protest on the Gbongan-Ibadan highway in Osun State, causing gridlock.

Similar protests had also held across major parts of the country some months ago until the students were seemingly fagged out and awaited the outcome of the negotiations between the striking unions and the government.

At the time, all the university based workers unions including the Non-Academic Staff Union of Educational and Other Allied Institutions (NASU), Senior Staff Associatuion of Nigerian Universities (SSANU) and the National Association of Academic Technologists (NAAT) had also declared strike.

However, in August, while other unions suspended their more than five-month-old strikes, giving the government ultimatums to accede to their requests, ASUU opted to continue the industrial action and declared it indefinite, citing government’s decision to jetisson its earlier negotiated agreements through its appointed committees.

Following the stalemate and the emergence of a new NANS leadership with Usman Barambu from the Federal University, Dutse, Jigawa State, as the president, the union has renewed its threat to ground major activities nationwide.

NANS said part of its strategies is to obstruct movements across major airports “so that the members of the elite and the ruling class can be reminded of the plight of the university students.”

Meanwhile, following its inability to persuade the union to resume work pending the resolution of the crisis, the Nigerian government penultimate week referred the dispute to the National Industrial Court of Nigeria where proceedings are billed to continue on Monday (today).

But the Speaker of the House of Representatives, Femi Gbajabiamila, has called for a meeting with the striking lecturers’ union, seeking a lasting solution to the lingering strike, the Punch reported.

Mr Gbajabiamila was quoted to have said: “The House of Representatives is deeply concerned about the renewed strike which seems to have defied all efforts made to find a solution or reach agreement between the Federal Government and the striking university lecturers.

“The House is more worried by the negative consequences of the strike on the future and quality of education of our teeming youths who have been kept at home for the past six months despite the intervention of the House and several well-meaning Nigerians over time to see that the matter was resolved.”

Auctioned Vehicles: Jandor hits back at APC over criticisms of visit to families