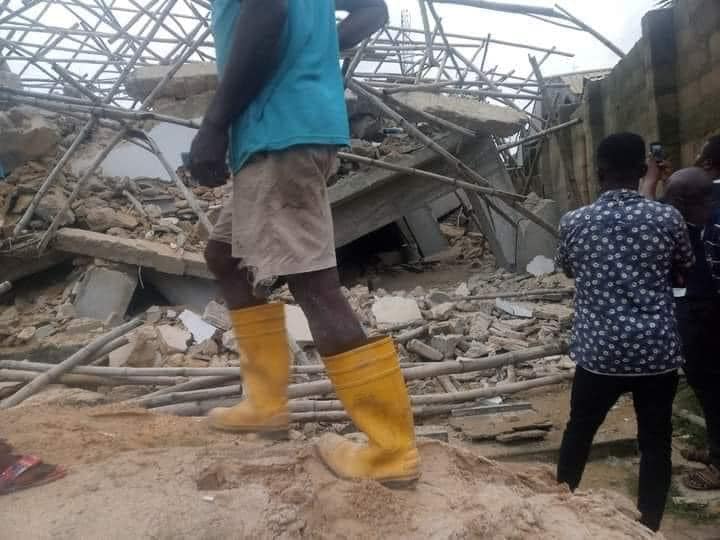 Others who sustained injuries are receiving treatment in the hospital.

Two people have been confirmed dead during the collapse of a four-storey building in Uyo, Akwa Ibom State, on Saturday.

The building, at Iman Street, off Aka Road in Uyo, was supposed to be a six-storey. It caved in while the contractors were on the fourth floor.

“We have recovered one dead body here, and the other died in the hospital because of multiple injuries,” The South-south Zonal Coordinator of the National Emergency Management Agency, Godwin Tepikor, said to reporters in Uyo on Sunday.

Others who sustained injuries are receiving treatment in the hospital.

Mr Tepikor said he got the information about the building collapse at about 7 p.m. on Saturday, and quickly mobilised Federal Road Safety Corps, the National Security and Civil Defence Corps, Fire Service, and Red Cross to the scene.

“I advised that they should contact any construction company to mobilise their excavator.”

Mr Tepikor said he suspected that the construction workers did not follow building guidelines.

Meanwhile, the Akwa Ibom State Governor, Udom Emmanuel, has said that the government would sanction those responsible for the building collapse.

The Commissioner for Information in the state, Ini Ememobong, disclosed this in a statement on Sunday in Uyo.

“The Governor has directed the Commissioner for Works and Fire Service to immediately set up a Panel of Inquiry to investigate the unfortunate incident,” Mr Ememobong said in the statement.

“The panel is to conclude its work within one month, and if it is found that the collapse of the building was as a result of any acts of negligence or wrongdoing, those responsible will face the full wrath of the law.”

Governor Emmanuel also directed the government, through the commissioner for health, to take over the “management of the survivors”.

Mr Emmanuel condoled with the families who lost their loved ones in the incident and wished the survivors quick recovery.

He thanked the first responders, the rescuers, and the security agencies for the rescue operation.

Many people were killed in Uyo in 2016 when a church building collapsed in the city.