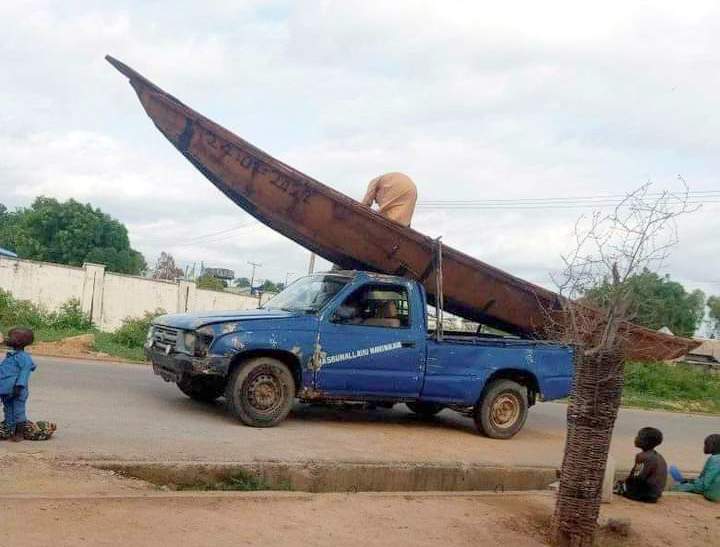 The canoe bought using the levy collected from a Zamfara community.

Terror gangs the area impose protection levies on resident to spare them from attacks.

About 14 communities in Anka area of Zamfara State have contributed at least N19 million and a canoe to terrorists operating in the areas between Anka and Bukkuyum as protection levies.

A reporter, Yusuf Anka, who is from the area, told PREMIUM TIMES, that many communities in Anka contributed to pay the protection levy to the terrorists.

He said the terorrists imposed the levy on the communities just before the start of the rainy season.

He said the terrorists requested the protection levy to allow residents of the communities cultivate their land for the start of the planting season.

Mr Anka said residents of the communities had no option than to gather the said amount to avoid being attacked by the terrorists while working on their farms or even in their villages.

“The communities were all under Anka and have been asked to mobilise the money for protection. Some communities have paid theirs two months ago, others are just paying now. But the total paid have reached N19 million and a canoe,” said Mr Anka, who had done extensive research on terrorism in the North-west including the recent documentary for the BBC Africa Eye, Titled “The Bandit Warlords of Zamfara.”

He said the canoe was bought by Yar Sabaya community. Anka is surrounded by two rivers and other smaller bodies of water.

“The bandits asked the different communities to gather the money so that they (bandits) would allow them to work on their farms without attacks. This was not the first time they were asked to pay these levies,” Mr Anka added.

A community leader in Anka who asked not to be named for security reasons, said they were aware of the protection levies imposed by the terrorists.

“Everyone in this town (Anka) knows that the bandits are exploiting innocent residents of local communities. They know how important the rainy season is to our people, so they would continue to ask them for such levies to allow them go to farms,” he said.

But he feared that the terrorists could still harm the residents especially during harvest.

“Protection levies is not the best option because they (terorrists) could still attack these people while they’re harvesting their farm produce and possibly ask for their share. But then, you can’t ask them (residents) not to give the terorrists what they’re asking since there is no alternative to that,” he said.

Zamfara State is one of the most terrorised states in Nigeria’s troubled North-west region.

Terror gangs in the entire region engage in cattle rustling, kidnap for ransom, and armed robbery. Thousands have either been killed or displaced by the activities of these terror gangs.

The police spokesperson in Zamfara State, Mohammed Shehu, didn’t respond to calls and SMS sent to him on the protection levies paid by the communities.