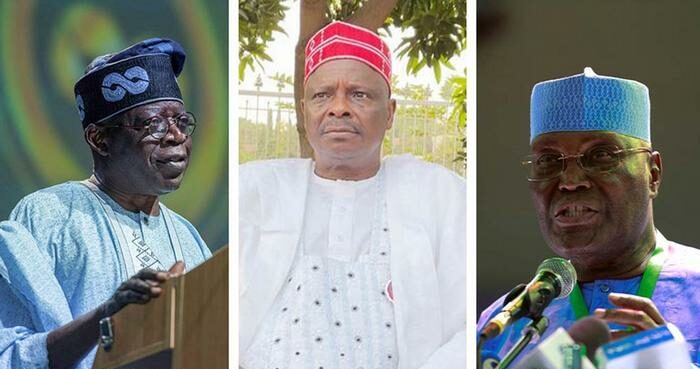 An opinion poll recently conducted on the forthcoming presidential election had projected the LP candidate, Peter Obi, as the winner of the election ahead of the others.

The campaign councils of three leading presidential candidates in the 2023 general election have dismissed a recent opinion poll that put the candidate of the Labour Party (LP), Peter Obi, ahead of them.

In the result of the poll conducted and released by ANAP Foundation, on Thursday, Mr Obi, was ranked first, beating Bola Tinubu of the All Progressives Congress (APC), Atiku Abubakar of the Peoples Democratic Party (PDP) and Rabiu Kwankwaso of the New Nigeria People’s Party (NNPP).

Both Messrs Tinubu and Atiku shared the second position, while Mr Kwankwaso came a distant fourth position in the poll.

In the percentage rating, the LP candidate got 21 per cent while the APC and PDP candidates garnered only 13 per cent each from the poll said to have been conducted across the six geo-political zones in the country.

The researchers did not disclose the methodology and the number of people that participated in the poll.

Speaking on “Politics Today” a programme on Channels Television, on Thursday, the spokespersons of the campaign councils of the NNPP, PDP and APC, took turns to tear the outcome of the poll, saying it is laughable.

Abdulmumin Jubril, the spokesperson of the NNPP presidential campaign council, said the programme gave credence to the poll which should have been ignored.

Against the projection of the poll that Mr Kwankwaso, a former two-term governor of Kano State, lost the north, Mr Jubril said his principal has the region on “lockdown” and will garner the rest of the needed votes from the other parts of the country to win the February presidential election.

“Let me say this, NOI poll clearly projected that Jonathan would win the 2015 election but he lost, which included many other works (NOI) has done. There is no work that they have done, where you can say that the projections are right or anything.

“Well, that is the extent that I will go in giving any recognition to that statement. It is absolutely false and is not a representation of the reality on ground, particularly if you are talking about the northern part. I have said this repeatedly, Rabiu Kwankwaso has the northern part on lockdown, in a matter of three to four months, the fact will emerge,” he argued.

Weighing the chances of both Messrs Tinubu and Atiku against Mr Kwankwaso, Mr Jubril described the APC presidential candidate as “a good person (pilot) in a bad party (aeroplane) called APC.”

He said Mr Obi and supporters are divisive but admitted to the chance of Atiku picking a fair number of votes across the country in the election.

In his reaction, the PDP campaign spokesperson, Daniel Bwala, said Mr Obi is basking in the euphoria of social media hallucination.

He dismissed the result of the poll and vowed to throw a party if the LP candidate is able to win just three states in the South-east, widely considered to be his stronghold.

Mr Bwala dismissed the poll on the ground that it failed to provide size of the participants, methodology and the margin of error which are basics in conducting a poll.

“I know they said it is a random sampling. But then, because of the result I am tempted to believe that this polling was carried out online because Peter Obi has a measure of people who are very active for him online much more than the other candidate and I will tell you why.

“There was an algorithm and data analytics that was carried out that came up with the finding that 57.5% of people who follow Peter Obi and engaged for him on social media do not live in Nigeria. In fact, the majority of whom are bots on Twitter, they are not real human beings.

“If you take away 57.5% of the people who are active for him, who probably live abroad and they don’t have voters card they are likely not to come to vote, then what it means is that Peter is basking in the euphoria of hallucination and this (poll) result is a true reflection of that,” he argued.

Mr Bwala said Atiku is the only candidate among the four that is accepted across the regions.

He supported his assertion by saying that President Muhammadu Buhari will not be on the ballot in the coming elections and this will be in favour of Atiku presumable as far as the north is concerned.

He said the PDP presidential candidate lost the 2019 election to Mr Buhari by over two million votes “when the APC was more united”.

The spokesman of the APC presidential campaign council, Bayo Onanuga, in his brief reaction, said the poll that gave Mr Obi a lead was “concocted and meant for the trash can.”

He noted that Mr Tinubu, believed to have an edge in the South-west, had only 18 per cent according to the poll.

“If you look at it, the reason why you have to dismiss this is this, the NOI poll gives our candidates 18% in the South-west, that is our own base. You don’t need to do any opinion poll to know that that is the stronghold of our candidate. And they went to the North-east and gave our candidate 18 per cent again, whereas the same people gave Peter Obi 64 per cent in the South-east. You can see that there is no logic in this thing,” Mr Onanuga argued.