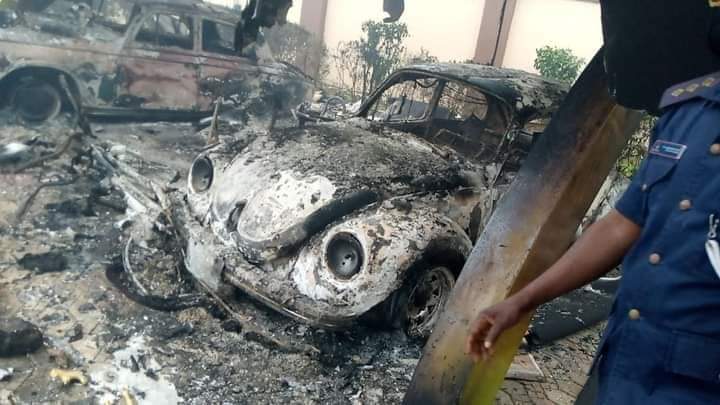 At least three persons were killed after violence erupted last Monday. But police said one fatality was recorded.

The tussle over who becomes the next Oja of Agosasa in Ipokia local government area of Ogun State has led to bloodshed and destruction of properties in the community.

At least three persons were killed after violence erupted last Monday. But police said one fatality was recorded.

The stool of the monarch became vacant following the death of the first Oja of Agosasa, James Elegbede, in February.

The controversy over Mr Elegbede’s successor got to a head on Monday when the youth in the community staged a protest warning against the installation of a candidate whom they termed as ‘unpopular’.

Some of the restive youth who spoke with PREMIUM TIMES accused an All Progressives Congress chieftain in the community, Akeem Adigun, of spearheading a plan to install the monarch.

They claimed that Mr Adigun is operating with the support of the “powers that be in government.”

On Monday, tempers flared in the community following the murder of one Nafiu Amosun, said to be a close ally to the candidate being supported by the youth of Agosasa.

As of Monday evening, houses and vehicles belonging to Mr Adigun and a former council chairman and appointee of the state Governor Dapo Abiodun, Isiaka Aderounmu, and others had been set ablaze by the youth.

Also, two more persons were said to have been killed, making a total of three lives lost in the violence.

About five others were reportedly injured and hospitalised as of the time of filing this report.

“At the moment, just like you can see, Agosasa is like a ghost town with a heavy presence of soldiers and policemen, they just left now, they will soon be back,” said a resident who preferred not to be named out of fear.

“Residents are indoors as those who could flee are already on their way out of the town. Some are running away through the forest. It is getting out of hand.”

It was gathered that chiefs and elders of the town are also on the run over the fear that their houses might be razed.

The Ogun State Commissioner for Local Government and Chieftaincy Affairs, Ganiyu Hamzat, did not answer calls nor respond to text messages sent to him.

The police spokesperson in the state, Abimbola Oyeyemi, confirmed the incident.

Mr Oyeyemi said he was only aware of “the killing of just one person.”

“The incident in Agosasa is an Obaship tussle,” he said.

“Unfortunately, one person was shot. We learnt that some houses and vehicles were razed. But our men are there on ground. The operation is being led by the Deputy Commissioner of Police, Department of Operations. Normalcy has been restored and our men are on the ground to forestall further escalation of the crisis.”

The police spokesperson said that some arrests have been made, but refused to give further details about the arrested persons.

“If everyone in the town had been killed before the installation, who will whoever emerges the king rule over? It doesn’t worth it. Nobody’s ambition is worth the blood of anybody. We should learn how to address issues legally instead of toeing the path of violence. It doesn’t pay anybody.”

Speaking at a meeting with some selected monarchs in Ogun west senatorial district on Wednesday, Governor Abiodun expressed his dissatisfaction over the incident, noting that there are legitimate channels to address issues in the state.

“When the issue came up, I said the Ministry of Chieftaincy Affairs should immediately take up the matter, but I was taken aback when I learnt that some people have started taking laws into their hands even while we are looking at the matter already,” he said.

“I have decided to track everyone involved in the incident either directly or remotely no matter how highly placed they might be. Ogun State was never known for this, you can take my words.”

Mr Adigun was initially unavailable for comments as his phone line was switched off.

But on Wednesday evening when PREMIUM TIMES got through to him, he denied the claims of him installing a monarch, saying only the government can do so.

“The same act is what the other party who are also eyeing the throne are trying to continue as it regards the process of selecting another monarch,” he said.

“I am not in a fight with anyone, all I am saying is that there is a process that must be followed and it is the government that will do this, let us allow the government to do their duty.”

Mr Adigun said he was in Abeokuta to attend a peace meeting summoned by the Commissioner for Local Government and Chieftaincy Affairs when he learnt that his house, cars, and other properties had been set ablaze.

EDITOR’S NOTE: This story was updated to reflect the comments of Mr Adigun, the APC chieftain in Agosasa.