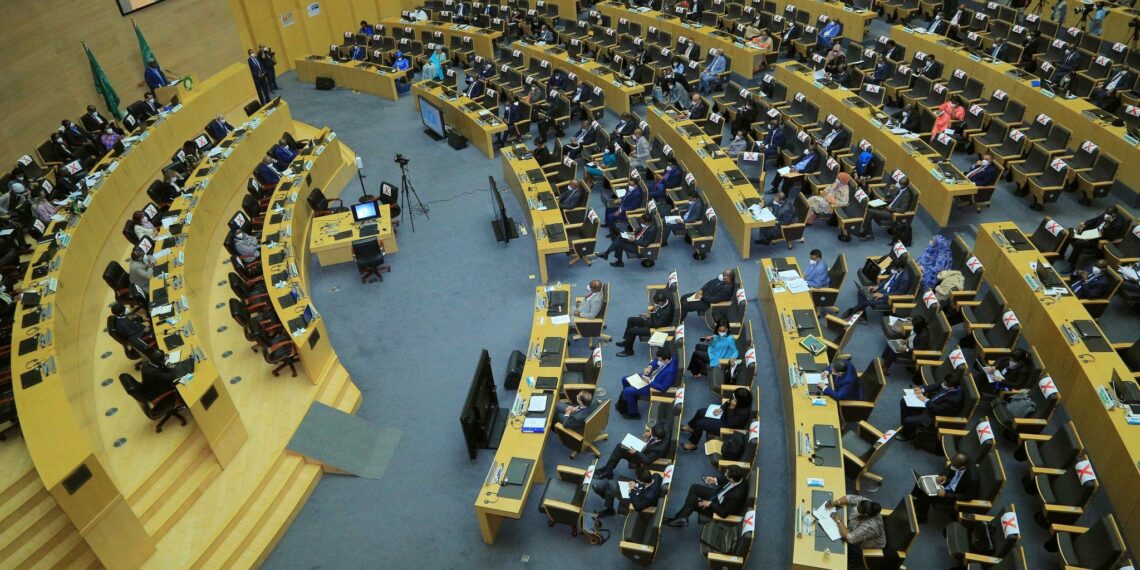 After lying dormant for 13 years, the AU sanctions committee aims for more consistency and better results.

The African Union (AU) decided in May this year to activate its Peace and Security Council (PSC) sanctions committee. Although established in 2009, the committee has never operated – partly due to opposition and a lack of buy-in from member states.

The decision is being hotly debated in AU policy circles, particularly the use of sanctions to curb coups and the trend of unconstitutional changes of government that enable leaders to extend their term of office.

Over two decades, the AU has set the pace among its global counterparts in using sanctions against member states. But despite its impressive record, without a committee to advise and monitor penalties and decide when to lift them, sanctions have sometimes been applied inconsistently and with mixed results.

The AU can impose sanctions for three reasons: when a member defaults on its financial contributions, after an unconstitutional change of government, and for non-compliance with decisions and policies. At times, the continental body has aligned with regional decisions to sanction a country, as in the recent case of Mali and the Economic Community of West African States.

Most AU sanctions have been issued in response to unconstitutional changes of government because of Africa’s many coups. Between 2000 and 2022, the penalties were used 20 times against 15 member states, either through suspension from the AU or targeted sanctions (see table). 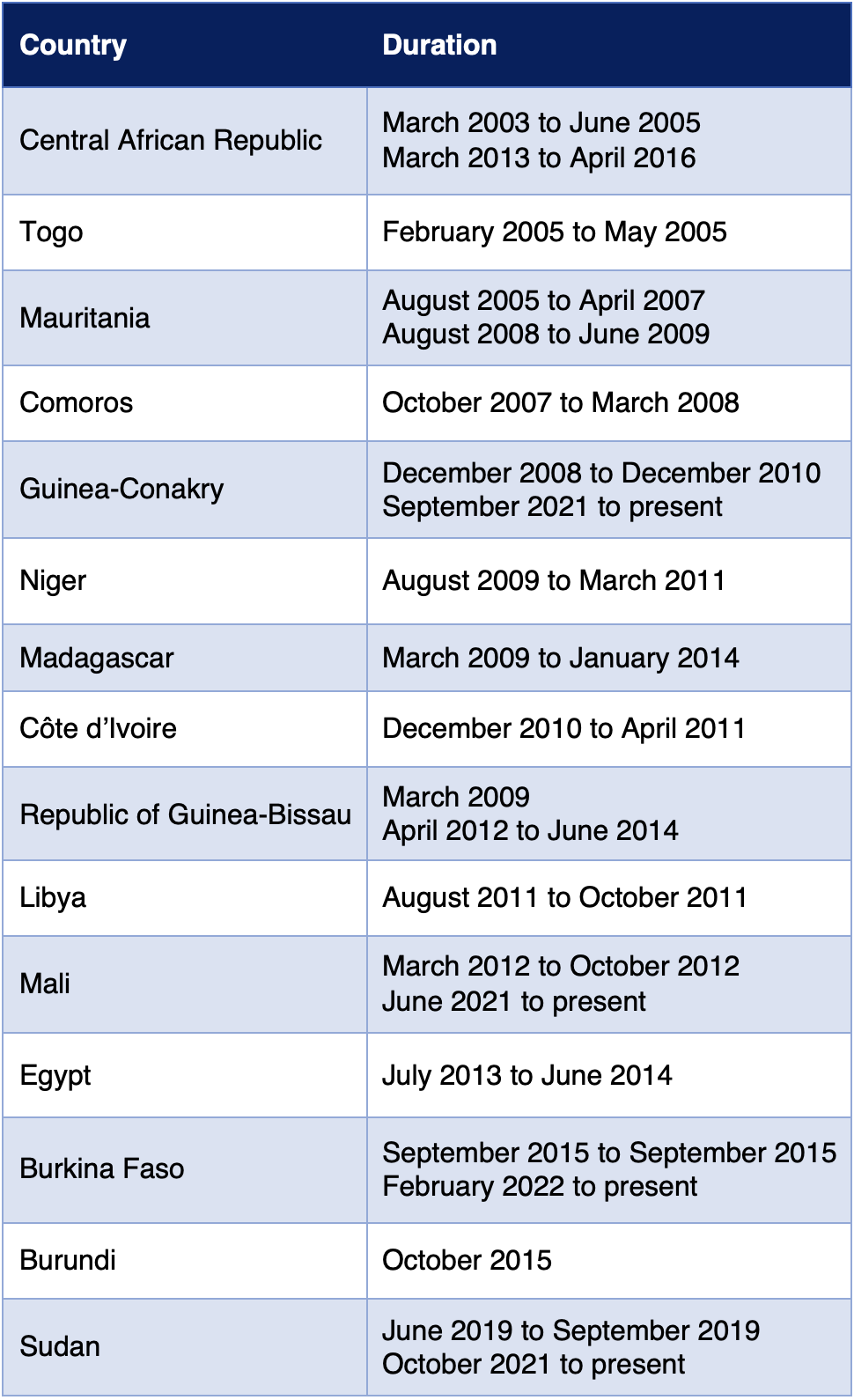 The AU has consistently implemented sanctions against unconstitutional government changes, particularly coups. Their success is evident from the reduction in overthrows since the AU took action. Between 1960 and 1989, Africa saw on average 2.2 coups a year, which dropped slightly to 1.6 in the 1990s. Between 2000 and 2019, the number fell to 0.8. This is due largely to the AU’s zero tolerance of coups and the subsequent sanctions or suspensions against offending countries.

Another sign that sanctions work is the extent to which member states vehemently lobby against suspension when dealing with complex political situations. Suspension is the last thing a country wants. Even when coup-makers show extreme recalcitrance, they rarely completely ignore the AU’s decision on suspension or question its legitimacy in calling for a return to constitutional practices.

The effectiveness of AU sanctions in deterring unconstitutional changes of government has depended largely on their predictable and consistent application. Of the 22 cases the PSC has handled since 2005, 91 per cent of states were suspended.

For example, consistent response to coups has made it easier to apply sanctions against even big powers such as Egypt in 2013. The failure to suspend a country following an unconstitutional change of government is seen as the exception – as happened when Mahamat Déby was named leader of Chad’s transition in 2021 rather than the national assembly president, as the country’s constitution required.

ALSO READ: ANALYSIS: What caused the coup in Burkina Faso?

The AU does not cut a sanctioned or suspended country loose but usually offers mediation to address the matter. In most unconstitutional changes of government, regional mediation supports a return to constitutional rule. The AU and regional economic communities are active participants in seeking solutions rather than just enforcers of norms.

Problems with the AU’s use of sanctions against unconstitutional changes of government have typically stemmed from its hesitation to suspend an offending state timeously, as happened after Sudan’s 2019 coup. In some cases, it seems the AU has allowed the partial implementation of provisions, lowered the bar for readmission after suspension, and legitimised coups.

Many coup-makers, for example, have re-entered government despite the African Charter on Democracy, Elections and Governance explicitly prohibiting them from doing so. This raises questions about the AU’s ability to follow through on its pronouncements. Without a robust sanctions unit to monitor the implementation of provisions, some requirements have not been fully implemented.

For the AU to establish an effective sanctions framework that deters coups, current practices must be refined. Ambiguities in the existing framework about when action is needed must be removed. This is particularly important with unconstitutional changes of government, given the blurring of lines between legitimate civilian protests and their evolution into military action, as happened in Sudan.

It is also important to know precisely when targeted sanctions should be triggered, particularly against the manipulation of constitutional provisions. Existing sanctions procedures must be aligned with the new and changing threats they seek to address.

Apart from activating and equipping the sanctions committee, it must be supported by a permanent AU Commission unit and a monitoring group. This group would conduct pre-sanction assessments, monitor imposed sanctions, advise sanctioned member states and assess compliance before penalties are lifted.

This is vital if the AU increasingly uses targeted sanctions to prevent unconstitutional changes of government. The monitoring group would boost the technical components of the sanctions process and ensure consistency and predictability in how Africa’s political leaders use the tool.

Sanctions operate better with broad support and reach, which means better coordination is needed to ensure synergy between AU sanctions and those of organisations like the UN.