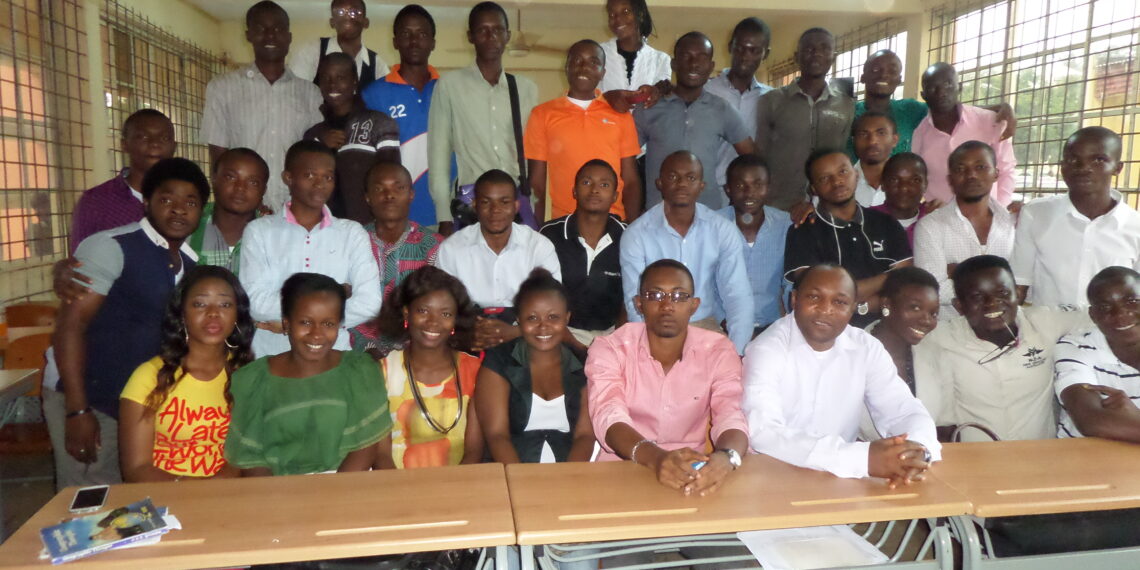 Final year students of Geography, 2014 cohort, University of Nigeria Nsukka who participated in the research.

Many identified themselves as “change agents” who could influence people’s attitudes about waste. In this role, they said, they could create awareness about the “resource and cultural value of waste”.

Nigerian cities aren’t managing solid waste effectively. Waste has to be managed all the way from generation to storage, collection, transport, recycling, treatment and disposal. But it is visible everywhere in the country’s cities, presenting a major socio-cultural and environmental challenge.

Cities tend to treat waste as purely a technical issue, and this may be why the problem persists. It also has a human element.

City managers have overlooked the potential contribution of university students to solving it. Campuses are a good place to start creating awareness of urban environmental issues because some of them are like small cities in their own right. The University of Nigeria, University of Ibadan, University of Lagos, Ahmadu Bello University and Obafemi Awolowo University each have a student population of more than 30,000.

In our undergraduate geography course at the University of Nigeria, Nsukka, we aim to interest and involve students in world problems like this. As we’ve described in a 2018 paper, we made changes to the content and scope of our geography curriculum in an effort to inculcate environmental citizenship in the
undergraduates.

We started in 2008 by gauging final year geography students’ perceptions and attitudes toward solid waste management as a research field and as a career. Then we put in place a programme of teaching, action research, advocacy and occasional involvement in environmental cleanup exercise on campus. In 2014 we held focus group discussions with another cohort of students to assess the impact of curriculum changes made in the intervening period.

We contend that introducing solid waste management education into the undergraduate geography curriculum in Nigeria positively influenced students’ attitudes and behaviours towards this issue. And they could have a loud, strong and distinct voice in environmental and social policy and action. Their use of social media, in particular, allows their message to reach many young people.

Fifty students and two lecturers were involved in the first phase. The second phase comprised 44 undergraduates and three researchers. These students represented various cultural groups from 13 states, accounting for 36% of the states in Nigeria.

The environmental education initiative in 2008 and 2014 used a combination of qualitative methods – focus group discussions and in-depth interviews with the students – and a review of policy documents. In 2014, the use of social media was introduced, and this had a significant impact on the students’ environmental attitudes and behaviour. It enabled them to interact more effectively among themselves in ways that protect the environment. Curriculum change and introduction of new teaching and research methods were part of the innovations that fostered robust conversation and academic rigour.

To assess the impact of the initiative, we asked the students for their views during the 2014 event.

Many identified themselves as “change agents” who could influence people’s attitudes about waste. In this role, they said, they could create awareness about the “resource and cultural value of waste”.

According to a participant:

We should make people aware that there is asset in waste, i.e. recycling.

Waste is not waste but is rather wealth.

Participants in the female focus group all agreed that women bear a disproportionate burden of environmental management in Nigeria. They lead in managing waste in their households. Women were also likely to be more vulnerable to the impacts of poor solid waste management.

Some participants said there was a need to encourage more students to research sustainable solutions to the waste challenge. Pro-environmental behaviours such as “the 3Rs” (reduce, reuse and recycle) became buzzwords in their daily interactions.

Reducing paper and using email, Facebook and WhatsApp in their class communications became commonplace. Where paper had to be used, reuse was encouraged. In fact, recycling became a way of life among the students following this learning experience.

It would seem that students’ views are often moderated by their socio-cultural background and their lived experiences during their upbringing in their home locales. For example, the Niger Delta as a cultural region is where civil society activism and civic engagement have become an everyday way of life. Students from the Niger Delta states (about 39% of the class) tended to have an activist outlook on the environment. This tendency could be a result of their exposure to pervasive degradation and pollution from oil and gas and industrial activities.

As graduates now, these ex-students have continued to regularly engage in robust debates regarding the environment. They seek to contribute to solutions through the department’s alumni Facebook page.

The observation that “there is wealth in waste” suggests that an opening exists for enterprising students to manage waste as a business.

Some participants saw lecturers who were involved in research on solid waste management as their role models, because the lecturers have published research in reputable books and journals.

The students expressed an interest in having their own work published online for everybody to see in future.

Participants also wanted more environmental content to be taught in the university and in more engaging ways, such as field trips.

From their responses, it’s clear that students are likely to engage in actions and behaviour that have a positive impact on sustainable urban development.