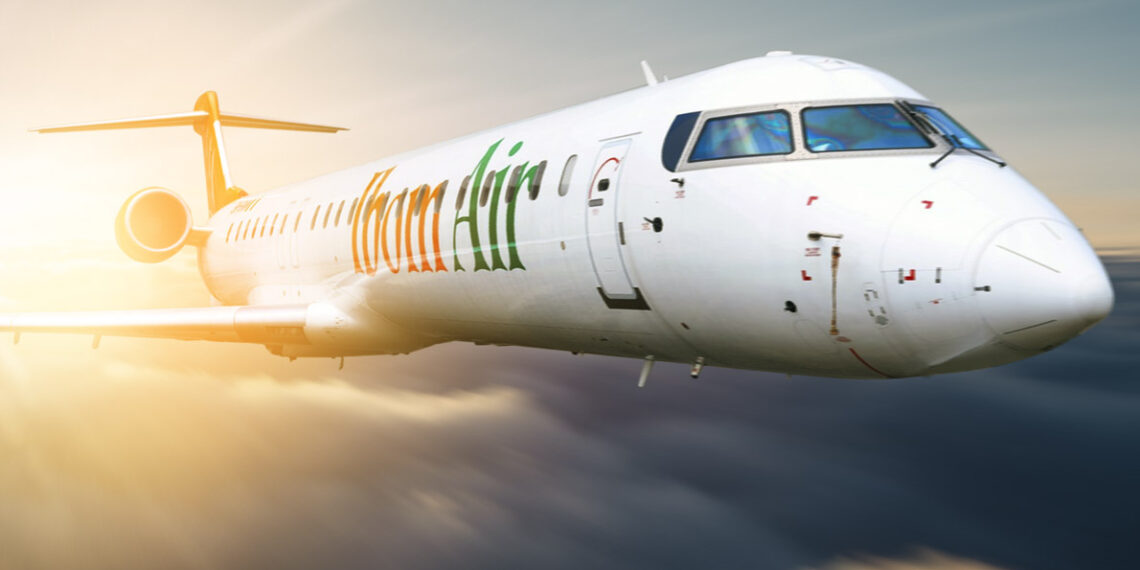 Many Nigerians are talking about Ibom Air, helping to amplify the beautiful experiences of the airline passengers.

Many Nigerians seem to have a liking for Ibom Air, a commercial airline wholly owned by the Akwa Ibom State Government, in the South-south region of the country.

Set up just three years ago, Ibom Air has built a solid reputation and is gradually dominating Nigeria’s aviation sector, in what analysts attribute to the foresight of the Akwa Ibom State Governor, Udom Emmanuel, and the professionalism and dedication of the airline’s management and staff.

The selling point for Ibom Air is, some passengers told PREMIUM TIMES, its scheduled reliability – its ability to keep to scheduled time for departures and arrivals.

Besides, their aircraft are clean. And they have a reputation for excellent customer service, according to several passengers who have shared their experiences on Ibom Air flights.

Stories abound of how several Nigerians have missed their Ibom Air flights simply because they could not keep up with the airline’s punctuality.

In March 2021, for instance, Ibom Air achieved 99.8 per cent schedule reliability and 96 per cent on-time performance, a remarkable feat in Nigeria’s aviation history where passengers have become accustomed to several hours of delayed flights and flight cancellations.

It is the airline with the second highest number of domestic flights in 2021, and the one with the overall best on-time performance for that year, the Nigerian Civil Aviation Authority (NCAA) said in a recently published data.

The airline, with seven aircraft (five Bombardier CRJ900 and two Airbus A220-300) in its fleet, flies 11 routes, covering six Nigerian cities – Abuja, Calabar, Enugu, Lagos, Uyo, and Port Harcourt, and has operated 23, 630 flights and carried close to two million passengers as of 31 July 2022.

Its two Airbus were acquired as part of a recent deal to purchase 10 Airbus A220 aircraft.

It is one of the most preferred airlines for the lucrative Lagos-Abuja routes because of its scheduled reliability.

Chidozie Uzoezie, an aviation analyst and CEO of The Afritraveller, was on Ibom Air flight QI0602 from Lagos to Enugu on 24 October, 2021, and here is how he rated the flight which was his first with the airline: Check in: 85 percent, Boarding: 80 percent, Punctuality: 90 percent, Aircraft: 90 percent, Crew: 90 percent, In-flight service: 80 percent, Flight: 95 percent, and Seat comfort: 95 percent.

“Most of my expectations were met and even exceeded, especially with respect to punctuality, crew and the actual flight,” Mr Uzoezie said in his review of the flight.

“Speaking in relative terms, the flight was everything I had expected, it surpassed the average domestic flight in Nigeria. And I’ll definitely fly with Ibom Air again,” he added.

Mr Uzoezie gave a description of the aircraft cabin.

“This particular aircraft (with registration number 5N-BWK) was delivered to Ibom Air in 2019. It is configured with 90 seats in an all-economy class layout.

“The aircraft cabin was very clean, and smacked of freshness as I stepped onboard. And my first impressions were those of comfort, elegance, and luxury. My seat was 12D – a window seat – which I had deliberately selected during online check-in to help me put my avgeek skills to good use,” he said.

“With a four abreast configuration in a 2-2 layout, the CRJ-900 is one of the most comfortable narrow body aircraft in the skies today. I didn’t get to measure the seat dimensions, but the aircraft offered impressive seat width and generous leg room, better than the industry standard.

“The legroom was so generous that I could cross my legs in-flight without space constraints. And to make good things even better, the seats were made of leather, taking seat comfort to another level.”

Many Nigerians are really talking about Ibom Air. They are happily helping to amplify the beautiful experiences shared by the airline passengers.

A Twitter user, Nayomi (@Naayoomee) said in June that she went for Ibom Air after her Lagos-Abuja flight on another airline was rescheduled from 3p.m. to 9p.m.

“I went down and got Ibom Air, best flight I ever had. Didn’t even know when we landed. I rate them five (5) stars,” she tweeted.

Oluwole Dada (@oluwole_dada), a sales and marketing expert, said on Twitter that from a minor survey, Ibom Air is the best domestic airline when it comes to punctuality.

“Many of the (other) airlines delay flights with no regard for the customers,” he said. “They care less if they (passengers) have an appointment or business engagement.”

Kate Nanyongo (@KateNanyongo), a Cameroonian, said she had a “wonderful experience” on her first visit to Nigeria, courtesy of Ibom Air.

She said she could not stop telling people about Ibom Air when she got back to Cameroon.

The running of Ibom Air is insulated from unnecessary political influence, those familiar with its operations told PREMIUM TIMES.

For the Akwa Ibom government to allow the young airline to be so business-focused and be managed independently by professionals is a rare thing in a country where political and ethnic considerations seem to influence most decisions of government officials, says Julius Ugwu, an entrepreneur, who is into home interior design business in South-south and South-east.

“For a person to fly a CRJ 900, there’s a minimum number of freighting hours he must have on the airplane,” Governor Emmanuel, a 56-year-old former banker, said in 2019 when he explained why most of the Ibom Air’s employees were from outside Akwa Ibom State.

“We need to have our people rated on the aircraft and we will spend money and train our people so that in a short period, we will also have Akwa Ibom names in the cockpit,” he said.

The governor said the state government was arranging training programmes for youths in the state willing to become pilots, aeronautic engineers, or take up other career paths in the aviation sector.

Today, the airline has over 500 staff.

Ibom Air, in collaboration with the Akwa Ibom government, is training 100 young pilots in batches for its future operations. The second batch had been scheduled to leave Nigeria for their training at Airbus in France, according to the airline.

Ibom Air flew into terrible storms as soon as it began its operations: the Covid-19 pandemic which crippled the world’s economy, the #EndSars, a 2020 mass protest against police brutality that shook Nigeria, and now the scarcity of aviation fuel in Nigeria and the continuous devaluation of the naira against the U.S dollar.

The airline Chief Operating Officer, George Uriesi, spoke on the challenges the airline has faced.

“This is an industry of tempestuous storms. One moment you’re faced with the existential threat of a total lockdown due to a totally unforeseen pandemic. You think to yourself, ‘is it that we chose the wrong time to start’?

“Then you survive and soon start recovering only to experience #EndSars! Again you manage to recover,” Mr Uriesi said a few weeks ago.

“And then the price of aviation fuel suddenly takes you on a roller coaster ride where you find yourself hanging on for dear without a clear sense of how long it will last and how far it will go.

“All of these are not to mention the depreciating naira and unavailability of forex that the business depends on.

“It has really been a hair-raising roller coaster ride. But we have no intention of rolling over and dying anytime soon. We will just keep weathering it and working hard to succeed in spite of these obstacles,” Mr Uriesi added.

Even with the enormous challenges, Ibom Air is still doing greatly, and still getting praises from Nigerians.

In July this year, for instance, Ibom Air achieved 72 per cent schedule reliability and 68 per cent on-time performance, still a remarkable feat in the face of the crippling challenges in the aviation sector.

Again, it has been rated as the airline with the second highest number of domestic flights (2,981) in the first quarter of 2022, and the one with the overall best on-time performance within the period, according to data from NCAA.

From the data, Air Peace, Arik and Max Air are ranked as airlines that recorded the most delayed flights at Nigerian airports within the period.

“We continue to manage the difficulties arising from fuel scarcity and the closure of the domestic runway of the MMIA (Murtala Muhammed International Airport, Lagos),” Ibom Air said on 2 August, while alerting the public to the challenges they and other domestic airlines have continued to face in Nigeria’s aviation sector.

“But you really can’t put Ibom air side by side with any airline in the country,” a Twitter user, @marvelumoh, tweeted recently.

“Yes they have some issues these days, I experienced one recently. But they are still ahead as compared to any of the others,” he said.

The Victor Attah International Airport, named after the second civilian governor of Akwa Ibom State, is undergoing extensive expansion to prepare it for Ibom Air’s plan to go international, around the West Africa sub-region.

A new International Terminal Building constructed by a renowned civil engineering firm, VKS Nigeria Construction Ltd., is near completion, so is the second phase of the 3.6 kilometre runway.

The airport’s Maintenance, Repairs and Overhaul (MRO) facility is also near completion.

“A lot of people don’t understand what we have put in here, these are technical details that can facilitate certain aspects of economic growth in the state,” Governor Emmanuel said of the MRO when he went on an inspection visit to the project.

“The MRO can take two 747 aircraft series, eight of our A-220 300 series and all the CRJs for now, all installations are near completion and you can imagine we are the newest bride for all the aircraft maintenance companies across the globe and we have received offers from aircraft maintenance companies, you can imagine the foreign exchange this will bring to the state,” Mr Emmanuel added.

“I don’t know what other countries would do tomorrow, but I think what people should look at in Akwa Ibom is not just the building, it is not just the infrastructure that we are building, the question there is, how can a sub-national take up this level of responsibility? These are not small projects, these are massive national projects.

“As of today, there is no country in West Africa that has an MRO, I stand to be corrected,” he said.

Governor Emmanuel said the establishment of Ibom Air and the upgrade at the Uyo airport are all parts of his blueprint to make Akwa Ibom State become an industrial hub.

The blueprint hinged around the opening of major gateways – the air, sea, and land – to the oil rich state.

“When I came into office, I met one private jet and before I leave office I will not leave with not less than 10 airplanes that would be beneficiary to all Akwa Ibomites.