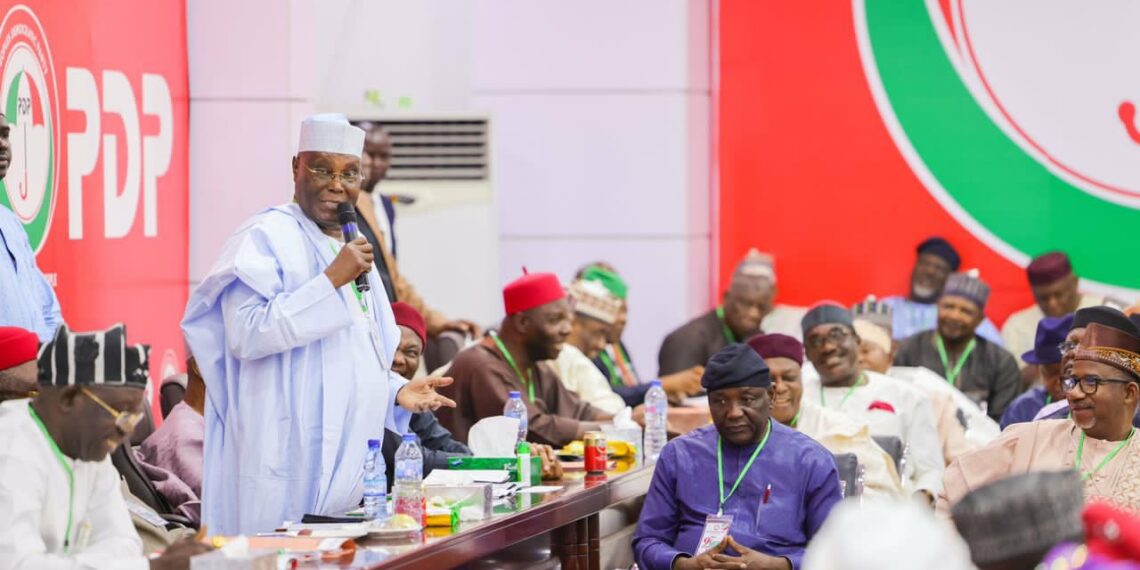 Members and supporters of the Peoples Democratic Party (PDP) were hopeful that at the end of the week, peace would have been brokered among the warring members – particularly between the party’s presidential candidate, Atiku Abubakar, and Governor Nyesom Wike of Rivers State.

These hopes were heightened after the two men met in London weeks ago, having been at loggerheads since the party’s presidential primary in May.

With the same hope, many members had looked forward to the PDP’s 97th National Executive Council (NEC) meeting and prayed that major decisions would be made to reconcile aggrieved members and bring the long-awaited and lasting peace the party needs so badly.

Safe to say these hopes have been dashed as the PDP appears to still be in chaos regardless of the resolutions made at the NEC meeting and some deliberate attempts at bringing peace – like pouring water into a basket.

The crisis in the main opposition party is now forcing it to focus less on the campaigns, which begin in a few weeks, and more on appeasing aggrieved members – comprising Mr Wike and some southern leaders who are demanding a grand sacrifice – the resignation of the party’s National Chairman, Iyorchia Ayu.

Mr Wike’s camp gave this as the condition before it would consider whether to support Mr Atiku’s presidential bid.

Mr Wike, who made this demand on behalf of the southern zone of the country, said it is to correct the imbalance in the leadership structure of the party.

He, like many other members from the South, described it as unfair to have the presidential candidate, national chairman, and chairmen of the Board of Trustees and the PDP Governors Forum, all from the North.

Atiku’s promise to make necessary consultations and revert to Mr Wike and his camp after the London meeting, and Mr Ayu’s initial promise to step down if a fellow northerner becomes the presidential candidate, were the basis for which many members were hopeful for peace – peace that would, at least, appease the governor and make him tone down his tirades.

It took Atiku and PDP about three weeks to, not necessarily meet Mr Wike’s demands, but do something. The three weeks were not exactly easy as he had to deal with Mr Wike’s daily tantrums about alleged enemies within the party, enemies after him and enemies who are looking to oust the South from major positions in the party as well as enemies who intend to loot the party’s funds.

As if that was not enough, Messrs Wike and Ayu at some point, had a back and forth, with the latter describing the governor and his supporters as children for calling for his resignation. And Mr Wike, in his usual expeditious manner, responded with a challenge.

During this period, Atiku would also meet with party chieftains and a few other presidential aspirants – but aspirants like Mr Wike and former Senate presidents, Bukola Saraki and Anyim Pius, were noticeably absent.

It was as though Atiku knew the demand for Mr Ayu’s resignation was not feasible. It was also like a deliberate attempt to get members of the party to send a message and somehow appeal to Mr Wike.

It has to be the only justification for Dele Momodu’s epistle wherein, he addressed a letter to Mr Wike – begging him to embrace peace and not make decisions in anger.

In his epistle, Mr Momodu also asked the PDP to look beyond the mistakes of the past and admonish Messrs Wike, Ayu and Atiku “to rise above the war of attrition for the sake of long-suffering Nigerians who need our attention desperately.”

Atiku’s numerous meetings also had to be the justification for Babangida Aliyu, former governor of Niger State and former Information Minister, Jerry Gana, calling for peace in the party as well as PDP governorship candidates visiting Mr Wike for the same purpose.

At Thursday’s NEC meeting, Mr Ayu did not resign, despite previous speculations that some members of the NEC were proposing a vote for the chairman to go and rumours that many members of the party wanted him gone.

Walid Jibrin, the chairman of the party’s BoT, was the sacrificial lamb led to the slaughter. He announced his resignation at the BoT meeting, which preceded the NEC meeting on the same day.

“We all want to make Atiku Abubakar become the president by all means, and that is why I sincerely decided to step down from the BoT,” he told members of the BoT. “I discussed this with the candidate and he agreed with me. I am sure if the party wins, I will be given a bigger position.”

His decision to resign was clearly not unrelated to Mr Wike’s demands. He was immediately replaced with a former Senate President, Adolphus Wabara, who would serve in an acting capacity.

For Atiku and the PDP, Mr Jibrin’s resignation and Wabara’s appointment into the party’s leadership structure should suffice.

As if to goad an already angry Wike, the NEC, in a unanimous voice vote, passed a vote of confidence in Mr Ayu and commended him and the National Working Committee for their hard work and resilience.

It is the second time the party would pass a vote of confidence in Mr Ayu, despite calls for his resignation.

Mr Wike’s reaction to Mr Jibrin’s resignation came less than four hours after it was announced – as expected.

He described the move as an insult to southern leaders in the party. But most importantly, he berated Atiku for joining the queue of people who have betrayed him.

On this queue, Atiku pretty much stands behind Mr Ayu, the Sokoto state governor, Aminu Tambuwal, and a few other unnamed enemies in the party. Mr Wike narrated how Atiku was the first to suggest that Mr Ayu has to go since he (the presidential candidate) is from the North.

“We were in Bala Mohammed’s house, the Bauchi State Governor, after the primary… He came to me and said Ayu must go. That is my problem with this country,” he said as he wondered why Atiku was going back on his word.

And for Mr Ayu, Mr Wike said the vote of confidence cannot save him.

A major question now is: if Atiku and Mr Ayu, at different times, said the latter would step down after the primary, what went wrong? Why is Mr Ayu holding on to the position? – besides the fact that he was elected for a tenure of four years and has only done one – as he has explained in the past.

Also, why does Atiku seem so lackadaisical about ‘doing something’ now?

On one hand, Mr Ayu is a key ally of Atiku. Their friendship dates back to the Third Republic where they were members of the Social Democratic Party (SDP). They were also together in the G-36 that formed the PDP.

Understandably, Atiku would rather have a loyalist and a ‘friend’ by his side as he campaigns and runs for the highest office in the land.

One of the spokespersons for the Atiku campaign, Charles Aniagwu, has said instead of removing Mr Ayu, the PDP was exploring other options in resolving the crisis rocking the party.

The party, he said, is taking a second look at the issues based on what was permissible by the laws of the party. He said sacking Mr Ayu would create a constitutional crisis for the party which would snowball into greater problems than what the party was currently faced with.

On the other hand, what if Atiku really wanted Mr Ayu gone? What if he asked Mr Ayu to resign to correct the lopsidedness and restore peace in the party and he (Ayu) refused? And Atiku, realised another option is to appeal to Mr Jibrin to be the sacrificial lamb especially since he is also one of those who have criticised the lopsidedness in the party’s leadership structure.

Chances of Mr Ayu refusing to step down are also possible if one were to go by Mr Wike’s concern and accusations that the chairman has his eyes on the party’s funds.

Either way, whatever move the PDP thinks it has made towards appeasing Mr Wike and his group or brokering peace, is far from successful. Atiku knows this. The party knows this which is probably why they have asked Mr Wabara to reach out to Mr Wike and make peace with him.

The defiant Mr Wike is still calling for Mr Ayu’s head – apparently, the only acceptable sacrifice at the moment.

Like it or not, Mr Wike remains a political bride who has the attention of many suitors at the moment.

He has threatened to withhold his support for Atiku in the 2023 general election if his demands are not met.

Many have said he has the upper hand on the negotiation table and does not need to back down.

Whether or not the governor will support the presidential candidate of the All Progressives ls Congress, Bola Tinubu, or that of the Labour Party, Peter Obi – two people who have tried to win him over – remains unclear.

It is, however, not a risk the PDP is willing to take.

Although the party’s recent move spells “do your worst” for Mr Wike, chances are, there will be more talks.

Already, there are speculations that Mr Tambuwal, who is also the chairman of the PDP Governors Forum, will resign, to pave way for a Southern governor to occupy the position. The Forum is also expected to meet soon and make a decision.

In the coming days, we expect more meetings and negotiations within the party and with Mr Wike’s camp. And there will definitely be more begging – just as much as Nigerians witnessed in the previous week, if not more.

Mr Wabara already started the begging when he addressed the NEC meeting on Thursday. He will likely do more should he meet Mr Wike later in the week.

While the party works towards appointing members of the presidential campaign council, a large chunk of its time will be focused on more ways to ‘appease’ the angry Rivers governor.