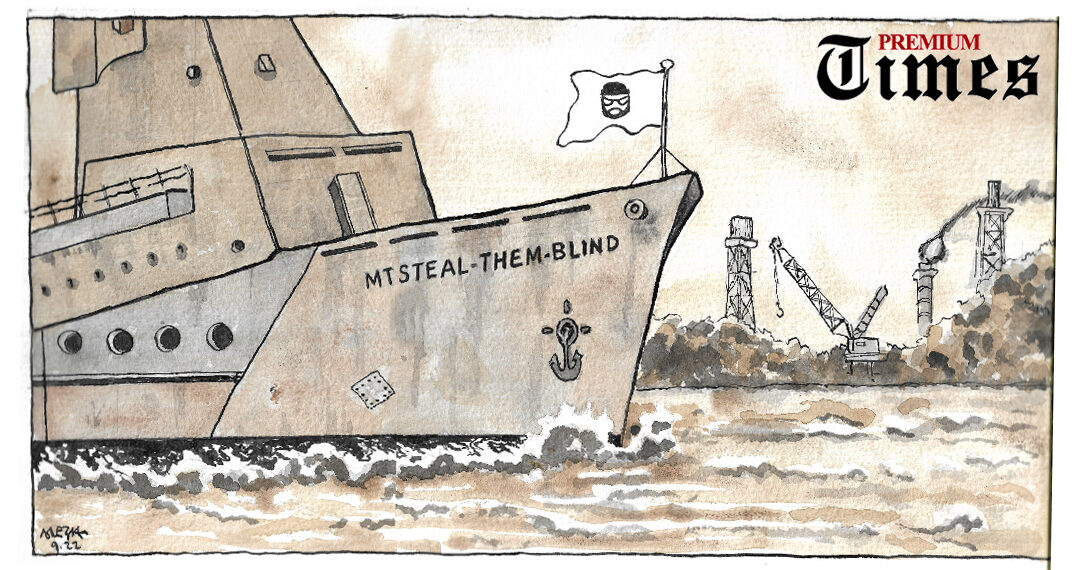 We call on the Buhari administration to create as much of a legacy as is still possible, in the next couple of decisive months in which it remains in office, by taking a firmer control of the security situation in the oil producing regions of the country.

A super oil tanker on a mission to steal Nigeria’s crude oil early in August has rekindled national interest in illegal oil bunkering, which has led to massive revenue shortages that have significantly contributed to Nigeria’s present fiscal woes. The tanker, MT HEROIC IDUN, belonging to a Norwegian firm, entered Nigerian waters and headed for the Akpo Oil Field without any document or clearance from the Nigeria National Petroleum Company Limited (NNPC). Curiously, the rogue ship, under the surveillance of the Nigerian Navy escaped, but was swiftly arrested in Equatorial Guinea with its 25 crew members on August 13 for sailing in the country without prior authorisation, an identifying flag, and fleeing from the Nigerian Navy as a result of suspicious activity.

Within the same period, the Minister of State for Petroleum Resources, Timipre Sylva, led a delegation of Federal Government officials, which included the Group Managing Director of the NNPC, Mele Kyari, on visit to state governors in the Niger Delta for collaboration in the fight against the menace. The Chief of Defence Staff, Lucky Irabor, had earlier executed a similar peripatetic task.

The official figure indicates that Nigeria loses some 400,000 barrels of crude to oil theft daily. This represents a lost income of about $40 million a day, according to sector experts. The country reportedly lost over $4billion in 2021 alone. The Navy says it has handed over 70 vessels, out of 127 caught in illegal bunkering, to the Economic and Financial Crimes Commission (EFCC) for the prosecution of its operators. Fourteen of these vessels have been returned to their owners after acquittal from wrong doing by the courts. These marauding vessels feed bigger oil tankers stationed on the high seas.

The scale of the criminal activities in our oil sector is so devastating that the Nigeria Upstream Petroleum Regulatory Commission (NUPRC) has called for the declaration of a state of emergency in the sector. Just last Tuesday, GMD Mele Kyari decried the 95 per cent loss of crude output to oil thieves at the Bonny terminal. Nigeria’s total output vacillates between 1.2 million and 1.4 million barrels per day. This is below its quota of 1.830 million bpd from the Organisation of Petroleum Exporting Countries (OPEC). Nigeria’s crude oil production is today essentially siphoned for shipment abroad or illegal local refining.

This explains why it is the only OPEC member-nation not reaping from the spike in oil prices at the international markets, which has averaged about $100 per barrel in recent months. Emirates, British Airways and other airlines operating out of the country have threatened to shut down their operations, amidst difficulties in repatriating over $464 million from ticket sales to their respective home countries. With a major forex shortage, the naira is on a free fall in the foreign exchange market, thus fueling inflation and hardship for the citizenry.

The N1.3 trillion revenue of government in the first quarter of this year, which is less than the N1.9 trillion used to service national debts, puts the matter in a grimmer context. The Minister of Finance and National Planning, Zainab Ahmed painted a more disturbing picture for 2023 last week, when she revealed a projected N11.30 trillion deficit budget, if the downward trend in revenue continued, as she defended the 2023-2025 Medium Term Expenditure Framework (MTEF) and Fiscal Strategy document at the National Assembly.

The cartel behind this multi-billion-dollar illicit trade has been a nemesis of every regime in Nigeria. It is not a new problem. Chatham House, a think-tank based in the United Kingdom, noted in 2014 that the theft was “on an industrial scale,” and was engineered by “politicians, military officers, militants, oil industry personnel, oil traders and communities.”

Sadly, as it is in terms of internal security in the country, President Muhammadu Buhari, who is the substantive Minister of Petroleum Resources, has failed in securing the country’s oil assets. His approach to solving the crisis is bedevilled by aloofness and complete failure to hold public officials to account, including those in the security sector. The result of this is in the recent N4 billion monthly contract to a non-state actor, ex-militant chief, Government Ekpemupolo, alias Tompolo, for the protection of Nigeria’s oil pipelines – to take on the job of security agencies. The leadership of these agencies of the state ought to be held accountable. It is worth recalling that President Buhari had cancelled a similar contract in 2015, worth N9 billion, awarded to ex-militants by the Goodluck Jonathan administration, while directing the military to take charge. But unfortunately, the situation had simply worsened thereafter.

Sadly, as it is in terms of internal security in the country, President Muhammadu Buhari, who is the substantive Minister of Petroleum Resources, has failed in securing the country’s oil assets.

Governor Nyesom Wike of Rivers State has said loudly that intelligence available to him strongly indicates that the military, police and Nigeria Civil Defence Corps personnel are entangled in the mess. There can be no better motivation for the sabotage than the betrayal of trust by these security operatives. The level of oil theft is so massive that the narrative cannot make sense if officials of the NNPC are not involved. The super tanker recently discovered had the capacity for three million litres of crude. This is not petty theft but a massive raid on the national treasury, which is largely suggestive of the organised concert of those with responsibility for the protection of national resources, including the security agencies and national oil company.

This official conspiracy could explain the escape of the Norwegian super oil tanker with the capacity to lift more than three days of Nigeria’s daily output. How can such a massive ship “escape”? The episode is a cruel reminder of the disappearance of MT African Pride, a Russian tanker laden with stolen crude oil under the Navy’s custody in 2004. Nobody was sanctioned for this national embarrassment.

Very importantly, also, PREMIUM TIMES believes that what we are witnessing is a clear narrative of a governing class that has lost its sense of enlightened self-interest and is allowing the goose that lays the golden egg to die. It is shocking that a government that is essentially financially bankrupt will not do the needful to recover a whopping $17 billion debt, clearly identified, along with the House of Representatives, to be the worth of under-declared crude oil lifted by some international oil companies (IOCs) between 2011 and 2014. The brigandage was preceded by a Nigeria Extractive Industries Transparency Initiative (NEITI) audit report that 160 million barrels of crude oil valued at $13.7 billion, was stolen in four years (2009-2012). This was in the shadowy record of just three oil companies it examined.

The Buhari regime must recover this $17 billion or Nigerians could conclude that its officials are in cahoots with actors involved in the plunder of national resources, which would include the security agencies, NNPC and the errant oil firms. The international community often labels stolen diamonds from Sierra Leone and Congo as “blood diamonds.” It should treat stolen crude from Nigeria accordingly as it is becoming clearer that that there is a connection between this continuous massive oil heists, pervasive insecurity and instability in the country, and the unravelling of the economy, as resulting from a transnational conspiracy among bandits, our security agencies and the NNPC.

We call on the Buhari administration to create as much of a legacy as is still possible, in the next couple of decisive months in which it remains in office, by taking a firmer control of the security situation in the oil producing regions of the country, curtailing the activities of oil thieves, and punishing rogue national actors and security agencies. If carried through, this might be some sort of legacy worth appealing to.

No threat to 2023 general elections – IGP