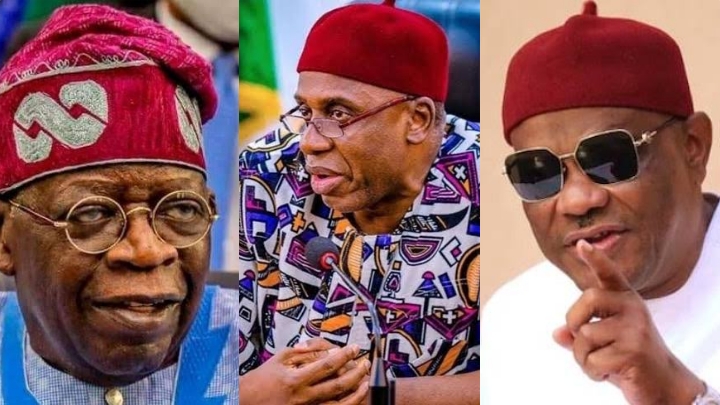 Bola Tinubu is seeking the support of Rivers Governor Wike, but the local APC in the state is unsure of how this will affect its leader, Rotimi Amaechi.

Port Harcourt, the Rivers State capital, has become the Mecca for political pilgrims in Nigeria in the past few weeks as the ruling All Progressives Congress (APC), main opposition Peoples Democratic Party (PDP) and Labour Party courted the governor of the state, Nyesom Wike, amidst the raging battle in the PDP.

In the past couple of weeks, the Rivers State Government House has hosted several chieftains of the ruling party, with some even commissioning projects, fueling more speculation on the future of Mr Wike, who is currently in conflict with the presidential candidate of his party, Atiku Abubakar.

Last week, the political scheming was moved to the United Kingdom, where the three leading presidential candidates, Bola Tinubu of the ruling party, Atiku of the PDP and Peter Obi of the Labour Party, separately met with Mr Wike and his co-travellers in the PDP.

However, it was their meeting with Mr Tinubu that set tongues wagging the most.

By all standards, the meeting was clandestine. Mr Tinubu sneaked out of the country for the meeting on Sunday and no single picture emerged from the event, unlike the others. The outcome of the talks has also remained cloudy as conflicting messages have been coming from the Tinubu camp

Kabir Masari, a chieftain of the APC, told BBC Hausa that the Rivers State governor agreed to work with Mr Tinubu

“The meeting was basically on the 2023 presidential election and by God’s grace, we are going to work with Governor Nyesom Wike; he will assist and we are going to win the election with ease, by the will of God.”

However, Dele Alake, one of the spokespersons of the APC presidential campaign council, on Friday in an interview on Politics Today, a political programme on Channels TV, said no alliance was reached with Mr Wike’s team, rather there was an understanding.

“What Masari was referring to was an understanding reached with the Wike’s group, not an alliance in the formal sense of it. If there was an alliance struck, there would be a formal statement from the presidential candidate of the party or the campaign council.

“Don’t forget, the Wike people are still consulting with other groups. Just like our candidate is consulting within APC because there are several caucuses in the APC,” he said.

But one other factor that makes the London meeting more interesting is the Wike and Rotimi Amaechi factor. The former minister of Transportation remains the leader of the APC in Rivers State and any alliance between Mr Wike’s group and Mr Tinubu could have an impact on other elections in 2023, considering that the National Assembly and presidential elections will be held on the same day.

Mr Amaechi has no public rift with the man who beat him to the presidential ticket of his party. In his congratulatory message after the primary in June, he said, “I wish to assure you of my commitment to your success at the polls in 2023 and ultimately look forward to providing the necessary support to ensure that we develop a prosperous country for all Nigerians.”

Since that message, Mr Amaechi has suffered several political blows in Rivers State. The former governor is currently not holding any post after he resigned his position as the Minister of Transportation to participate in the APC primaries.

Also, many of his political allies have resigned from the APC. Two former commissioners in the state, George Tolofari and Ibim Semenitari, have resigned as well as two other chieftains, Tonye Princewell and Celestine Akpobari.

It is believed that the exodus of the politicians is linked to the inability of Mr Amaechi to secure the presidential ticket of his party at the June Convention.

Yekini Nabena, a former Deputy National Publicity Secretary of the APC, told PREMIUM TIMES that Mr Amaechi had assured his followers that he would get the presidential ticket.

“As soon as these people found out that there is nothing Amaechi can do for them—they were all holding on because Amaechi told them that he was the preferred candidate of the presidency. As soon as that did not happen, all the strong men left the APC. Most of them—especially those from Opobo, made the excuse that the governor is from their place. Politicians will always look for something to hold on to,” he said.

Mr Amaechi and his allies will be facing Mr Wike, who has access to state resources. Also, in the past couple of elections held so far, “federal might” has become limited as a determining factor in the outcomes.

In addition, there is the exodus of the Magnus Abe faction from the APC. The former senator had supported Mr Tinubu during the APC presidential primaries. He officially announced his defection to Social Democratic Party in July and has picked the governorship ticket of the party.

Despite his resignation, Mr Abe said he would continue to back the ambition of the presidential candidate of the APC, while describing the Rivers State APC as a sinking ship, saying any worthy politician would not be on its board.

If the talks between Messrs Wike and Tinubu should yield positive results, it is unclear how Mr Tinubu will be able to get Messrs Abe, Amaechi and Wike to work together, considering their political history and different interests.

Mr Wike served as the Chief of Staff to Mr Amaechi, who reportedly nominated him as a minister in 2011. The two fell out later and when Mr Amaechi moved to the APC in 2014, the former stayed, and emerged as the governor of the state in 2015 with the support of then President Goodluck Jonathan’s administration.

Since 2015, both politicians have not had the opportunity to test their political structures against one another. In 2019, the court disqualified all the candidates nominated by the APC in Rivers. Currently, Messrs Wike and Amaechi have nominated their allies as the candidates of their respective parties.

The APC has Tonye Cole, who the Rivers State government judicial panel of inquiry indicted alongside Mr Amaechi for the alleged illegal sale of government assets during the last administration, as its governorship candidate.

Following Mr Cole’s emergence as the candidate of the APC, Mr Wike directed the new Attorney-General of the State, Zaccheus Adangor, to commence the prosecution of the two men.

The candidate of the APC will be going against Siminilayi Fubara, the anointed candidate of the PDP, and others. It is unclear how an alliance between Mr Tinubu and the PDP group will affect the governorship race in the state.

Also, there is Mr Abe, the governorship candidate of SDP, who has pledged to support Mr Tinubu despite no longer being a member of the APC.

The former senator served as Secretary to the Government of Rivers State under Mr Amaechi. However, the two men are now political rivals following the decision of Mr Amaechi to back Dakuku Peterside for governor in 2015.

In 2019, Mr Abe’s case led to the disqualification  of APC Rivers in the 2019 general elections. Also, during the APC primaries, he backed Mr Tinubu against his kinsman.

Any alliance between Messrs Tinubu and Wike must consider all these political variables. But Mr Nabena said Mr Wike is in a stronger position because of the incumbency factor.

READ ALSO: PT State of the Race: What does Obasanjo want as Wike drags Tinubu, Atiku, Obi to London?

Meanwhile, those close to Mr Tinubu continue to reassure Mr Amaechi that the ongoing talks will not affect his status as the leader of the APC in Rivers State.

“Nobody will do anything that will hurt Rotimi Amaechi; he is a party member and a formidable member of the APC,” Mr Masari had said during the interview with the BBC.

Also, Mr Alake stated that ”even if Wike is coming into APC, there will be a rapprochement with the local APC there—there is no problem.

“Asiwaju Tinubu is very concerned with every member of the APC, high or low. Tinubu is a consummate politician—he is a sagacious one at that. He does not take anybody for granted. He believes in accommodating everybody. He is concerned about the position of the leader of the party in Rivers State. He is open to building a consensus.”

Mr Amaechi’s spokesperson, David Iyofor, refuse to comment on this report. He did not return calls and a text message sent to him.

Mr Amaechi may, however, keep faith in the declaration by President Muhammadu Buhari that he will only support the candidates of the ruling party.

“I will not betray or undermine my party by supporting candidates other than those of the APC,” Mr Buhari recently said.

INTERVIEW: Why I will miss Nigeria – US Embassy Official Jeanne Clark