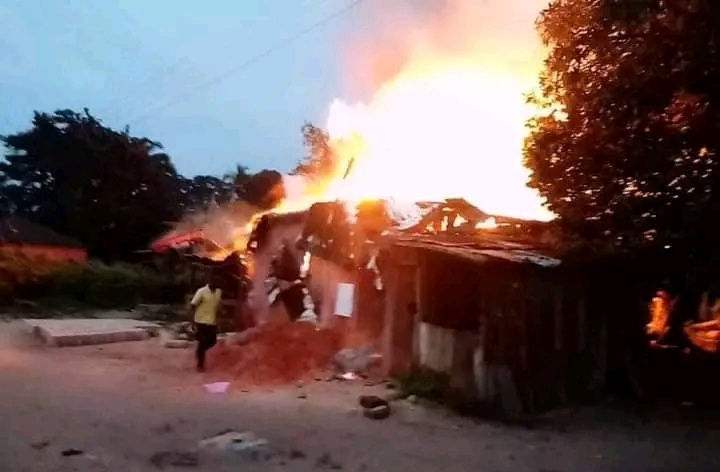 Several buildings in flames in Izombe Community in Imo State

“We have all run away. We are scared they might come back and kill us.”

The gunmen were said to have attacked the community at about 4:30 p.m.

The attack lasted for over two hours, PREMIUM TIMES learnt.

A resident of the area, Chijioke Kelechi, told this newspaper that the gunmen wore security uniforms.

He said the gunmen arrived the community in about eight vehicles causing residents to flee.

“Suddenly they started shooting sporadically and all of us ran for our dear lives,” he said.

“They set houses and shops ablaze, about 10 or even more.”

He said the gunmen appeared to be targeting specific houses and that they were also looting some shops.

“We have all run away. We are scared they might come back and kill us,” Mr Kelechi added.

He could not confirm if any resident was killed in the attack.

A video clip and photographs of some of the shops and houses razed by the gunmen have gone viral on social media.

In a clip, seen by PREMIUM TIMES, some shops and houses were in flames, with residents struggling to put off the fire.

“It is not easy for us now,” a voice is heard in the background. “They broke people’s shops and carried their goods.”

When contacted, the police spokesperson in the state, Michael Abattam, promised to respond to enquiries about the attack.

He was yet to do so at the time of filing this report.

Like other states in the South-east, security has deteriorated in Imo State, with frequent attacks by armed persons.

About 24 hours after the killing of the officers, gunmen also attacked a residence of a police inspector in Orogwe, a community in Owerri West Local Government Area of the state.

Two of the gunmen were killed in that attack.

The Nigerian government has accused the outlawed Indigenous People of Biafra (IPOB) of being responsible for the deadly attacks in the region. But the group has repeatedly denied their involvement in the attacks.

IPOB is a group leading agitation for an independent state of Biafra which they want carved out from the South-east and some parts of the South-south.

Leader of the secessionist group, Nnamdi Kanu, is being detained in Abuja where he is facing trial for terrorism.